Northwestern brings in 7-foot-2 recruit Chier Ajou, who hails from South Sudan. How much do we know about the unheralded enormous center prospect, who committed to NU less than five months ago? And can he contribute this season?

It's hard to really say what we know about Northwestern Wildcats incoming center Chier Ajou.

Even as a well-informed Northwestern fan, I had never heard of him until early June, after Mislav Brzoja - another person I had never heard of until like May - wasn't accepted to Northwestern and was forced to go elsewhere. He committed June 15, extremely late for a member of a recruiting class meant to start playing in November. And even then, he wasn't declared eligible to play for another two months until Aug. 15.

Here's what we know from a cursory glance

And, uh, that's really it. That's all I'd read before preparing to write this piece. His Rivals profile is bare, there are few articles about his high school dominance.

However, for a really awesome in-depth look at Ajou, I took a look at this Outside the Lines article about Ajou, part of a five-part series from 2011 about the world of recruiting basketball players from war-torn African countries, a field you can imagine is somewhat messed-up.

Ajou is somewhat of a success story. He lost two brothers and a father in Sudan, was kidnapped by Arab milita, but escaped - while other basketball prospects were being deemed hard-to-guard by recruiting experts, Ajou was being deemed hard to guard by friggin milita members attempting to imprison him - and made it to the United States. In 2008, he began playing basketball, going to school in Alabama, where he learned nothing, and transferred to Culver in Indiana. The next year, Steve Alford offered him a scholarship to New Mexico, which he accepted. Here is an out-of-context quote from the story:

"It is nice over there," Ajou says of the Albuquerque campus. "It is like Sudan."

I have a funny feeling "it is like Sudan" is not making it into any UNM prospective student pamphlets any time soon.

However the headmaster of the school got into a tiff with the school's basketball braintrust, deciding to reclassify Ajou for the class of 2012, since he had learned so little in Alabama and was behind his classmates. Instead of taking a second senior year at Culver, he went to St. Thomas More. Somewhere along the line, he reopened his commitment and now is a Wildcat. Awesome story of someone coming to America as somebody sent to a joke school meant to maintain his eligibility and leaving as someone academically capable of getting accepted to Northwestern in five years.

You might have noticed there were a lot of years there. That story was written last May, when Ajou was 19. So now, he's either 20 or 21. (His birth date isn't listed on the NUSports site.)

Basically, my point is, Northwestern has a 7-foot-2 freshman who is three or four years older than his classmates. Intriguing, huh?

Is he f'real 7-foot-2?: That was my initial thought, since people lie about players' heights all the time. Here's a still from a video on NU's website of the team's first practice at SPAC, showing Ajou just having given some dap to Kale Abrahamson, who is listed at 6-foot-7: 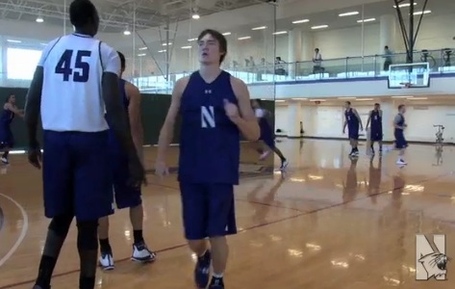 Yeah, he's 7-foot-2. You can also see Ajou towering over a huddle in the video, as well as Aaron Liberman in yarmulke here.

Loretta8: The thing about Ajou is from what I can tell, he's the kind of guy who is described as a project, and Bill Carmody doesn't have much of a track record developing such guys (see Ivan Tolic, Kyle Rowley, etc.). But, he's really tall so he should be able to help out right away defensively at the very least. And if he's not ready to go, NU always has the option of redshirting him.

Rodger: All that biographical stuff is nice, but the full extent of what we know about Ajou's game is: he's very tall, and it's possibly very raw. I'm fine with that. Last year Northwestern played a pair of big men whose games were very raw as well, except they were seniors and they weren't giants. If Ajou can use his unreal size to get rebounds and block shots - two areas Northwestern has been extremely weak in for the past few years - and score when unguarded, he'll be a nice pickup for Northwestern. I assume a player just introduced to basketball will take a little while to pick up things like the Princeton Offense, but he's not going to be leading NU in scoring anytime soon anyway.