A few Penn State fans took some cardboard and pointed out the hypocrisy of the fact that Northwestern is not, in fact, in the northwest of the United States.

Thursday night, at the Northwestern-Penn State basketball game, a few randos showed up to the game with a sign. 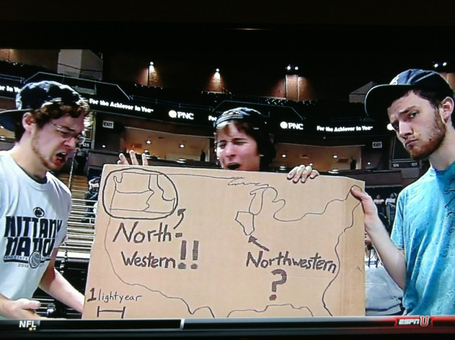 Yeah: they ripped off the side of a friggin cardboard box and decided to point out that Northwestern is in Illinois, not the northwest.

I don't expect everybody to know that the United States was formed a long, long time ago, before people had ventured into the parts of the country inhabited by non-white people, and that when Northwestern was founded in 1851, Illinois was one of the western-most states. So instead of just calling these guys dumb, let's point out the best parts of this sign.

1. The facial expressions (L) Abject disgust (M) o-face? (R) a level of self-satisfaction previously only seen in selfies on Myspace

2. Relatively accurate depictions of Michigan, Washington, Oregon, and Idaho, but a version of Illinois that looks like Nevada in the second trimester of pregnancy.

3. "Yeah, bro, this sign is hilarious. But the bottom-left is empty!" "Let's fill it with something. They put scales on maps, right bro?" "Yeah! But let's make it a funny scale, to show that we're not serious." "Good call, bro!"

4. Northwestern is not at the very bottom of Illinois, but whatevs

5. THE BEST JOKE THEY HAD WAS THAT NORTHWESTERN IS NOT IN THE PACIFIC NORTHWEST.

I will cherish this moment forever. It is very possibly the very only sign that has ever been made to mock Northwestern in advance of a basketball game.