Northwestern vs. No. 2 Michigan basketball preview

Northwestern takes on the undefeated No. 2 Michigan Wolverines. They'll have an uphill battle with the absence of Reggie Hearn, who is out with an ankle injury. It could get ugly.

Share All sharing options for: Northwestern vs. No. 2 Michigan basketball preview

We all know that the Big Ten is a soulless giant monster conference in 2012-2013. We've talked about it a lot. Well, we're going to find out about that very quickly in the next few days, as Northwestern opens up conference play with Michigan - yes, undefeated Michigan, the one with Trey Burke, Glenn Robinson III, Tim Hardaway Jr., and Nik "lolololololol play a zone against me i dare you lololol" Stauskas - and Minnesota, both top 10 teams in human polls, top 15 on Kenpom.

Take it away, Boldface Killah:

Sup buddy! Tell me: why is Northwestern probs gonna lose by a lot tonight?: Normally, I open with heavy analysis of the opponents. But:

Drew Crawford's out for the year. Reggie Hearn, who led the team in scoring even when Crawford was in the lineup on account of some really bad nights for Drew, has been ruled out of tonight's game, and considering he missed the Brown game with the same ankle injury - and that was almost two weeks ago - this could be a nagging thing that keeps him out longer. Yeah, he was a walk-on two years ago, but he's quickly developed into a strong defender, good shooter, and decent finisher around the rim, and is arguably the most important player on the team with Drew out. Sanjay Lumpkin, who didn't play meaningful minutes until after Crawford's injury and even then has only played 25 minutes in three games, is reportedly out and could be done for the season.

Where does that leave Northwestern? For starters, without their two best offensive players and two of their three best defenders. For reserves (?), a team that prided itself on its depth coming into the year will play a gimpy Alex Marcotullio starter's minutes, give Kale Abrahamson and Tre Demps heavy rotation in their first Big Ten game after occasionally seeming not-quite-ready-for-primetime in the non-con. With Lumpkin out, Northwestern could end up forced to play walk-on James Montgomery III if somebody (Dave Sobolewski) picks up a few too many quick fouls. How nuts is that? I like Abrahamson and Demps' games, but boy, those guys are going to be outmatched defensively against a team with at least three future NBA players on it.

On the plus side, Tim Hardaway, Jr. could be out too, having missed his team's last game.

How many injured players are there on Northwestern's stat sheet with more points per game than Dave Sobolewski, Northwestern's top leading healthy scorer?: That would be two.

How many teams in the country are ranked higher than Michigan: That would be one.

How many conceivable ways could Northwestern win a game in that scenario?: That would be zero. 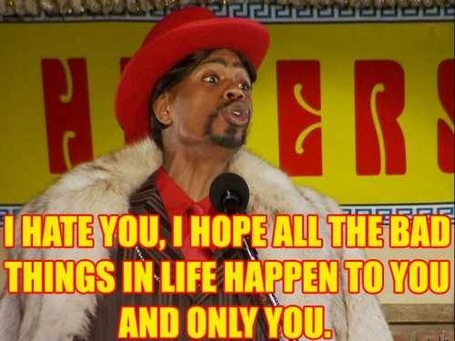 For the player on every other Big Ten team that inspires the most hate, regardless of whether or not he's playing Northwestern!

And the first winner is: Nik Stauskas! A freshman from Canada - yeah, I know, right? This was too easy - Stauskas is the best three-point shooter of Lithuanian stock since John Shurna, except he's also better at the one thing he does than Shurna was. That's no offense to Shurna: he's drilling 56.5 percent of his shots from downtown, and not for lack of trying, as he takes over five shots from downtown per game. I look forward to hating him for years to come. And at 6-foot-6, he's the rare college 3-point gunner who is is actually tall enough to translate his game to the next level. I hate to predict a whole player's career after 15 games, but his shooting goes past being hot for one night or something: it's not going away anytime soon.

How can NU defend Michigan?: Haaaaa. It's rare you see a team with three players as individually great at taking guys as Burke, Hardaway, and Robinson are, so NU will get killed in man. And all three guys are passable shooters, while Stauskas is a ridiculous gunner, plus, they're the No. 2 team in the country in terms of turnover percentage, so the zone won't work. Oh, and Burke might be the best point guard in the country, and Jordan Morgan has killed Northwestern before, so they can also pick-and-roll NU to death - as they have in past - if they get bored with regular dominance.

I shouldn't even ask about vice-versa, huh?: Nah. Michigan's 1-3-1 with all those athletic long dudes at the top is a real sight, although they probably won't play it against NU.

Can NU win?: I pretty genuinely don't see it happening. This is an uphill battle against a great team even with your stars, and now you don't have them. I'd love for the team to prove me wrong.