Cause I know You Love Your Tempo-Free: Wolveriiiiiiines!

Your favorite hoops pollyanna at the SoP, macarthur31, breaks down the four factors, individual stat-lines and other miscellany just in time for the B1G. For his first installment, it's Michigan.

Share All sharing options for: Cause I know You Love Your Tempo-Free:  Wolveriiiiiiines! 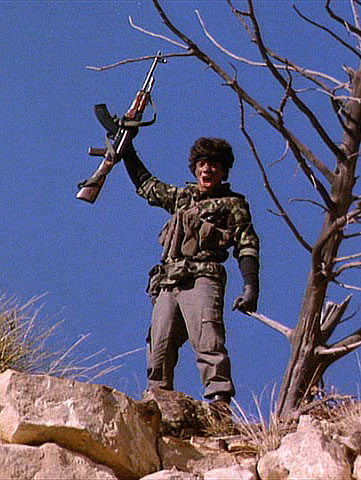 C. Thomas Howell offers a blood curdling victory yawp after fending off the Russkies in the good "Red Dawn" (1984). Fast forward to 30 years later, and darn it if things don't change.

Hey there, SoP. Instead of squinting in the comments, you get my tempo-free take in sweet sweet 14 point serif. And they told me that my Comm Studies degree would never amount to anything. (I showed you, Mom!) Alright, enough of my yappin', onto the take.

My source for the stats, the NBCSports.com Box Score.

Takes on the Tempo-Free:

What does life after Drew Crawford (and Reggie Hearn) look like?
Ladies and gentlemen, here is your wing play:

In short, not enough production -- Marco, Kale Abe and Demps combined eFG was 42.3. However, I liked that both Chips and Tre aren't scared out there. Chips has a really quick shot, and Tre can break down his guy. We've got something to work with there, in terms of offense.
How'd we do at the 5?
Olah/Turner/AJOU!: 41 m, 16 pts, 5 boards, 6 assists, 6 TO.
Points were ok, except that they're inflated by cameo triple by Chier Ajou. Needed more boards, and needed to take care of the ball better. It's not like Michigan harrassed us on D, the 5 was just sloppy.
Savvy Veteran Watch, a.k.a. "So, Sobo and Swop?"
Sobo: 34 m, 7 pts, 5 assists, 1 TO.
Swop: 30 m, 11 pts, 4 assists, 1 block, 2 TO.
The above are satisfactory "role-player" performances. However, we need front-line starter production from both.