Why does Northwestern struggle so much at rebounding? Is it talent? Coaching? SoP tries to get down to the bottom of the Wildcats' perennial weakness.

Share All sharing options for: Anatomy of a Missed Northwestern Rebound: Part 1

If you've been following NU men's basketball for some time, you know that rebounding has been one of the Wildcats' persistent problems. Thursday's game against No. 2 Michigan was a case in point, as the Wolverines nabbed offensive rebounds on eight out of their 23 missed shots. Jordan Morgan, in particular, was a beast, grabbing five of those offensive boards.

So why is NU so subpar at rebounding? A few theories have been floated. NU has lesser athletes than almost every Big Ten team. Head coach Bill Carmody and his assistants don't teach proper technique. The 1-3-1 defense does not lend itself to good rebounding. NU's starters play so many minutes that they're too tired to rebound. NU's lineup is undersized and soft.

Well, I decided to try and break down some game film from the Michigan game to see if any of those theories fit. I'm not trying to single out any players for any lapses or mistakes, but maybe if we look at some of the Wolverines' offensive rebounds, we might be able to determine if there are any patterns or cues that could indicate systemic issues. So, away we go with screen shots and MS Paint!

The first Michigan offensive board we'll examine is their first offensive rebound of the game. It happens just 1:10 into the game, as Nik Stauskas misses a layup after driving the lane, but Morgan is there for the putback. Let's set up the play. 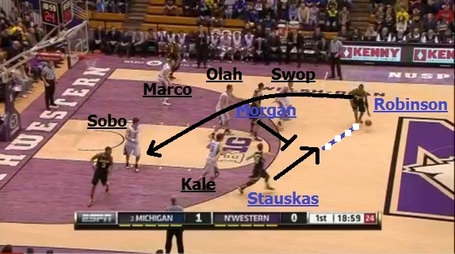 Hopefully I haven't cluttered up that photo too much, but Glenn Robinson III has the ball. He will pass it to Stauskas at the top of the key, before cutting diagonally through the lane. Morgan, meanwhile, will set a screen for Stauskas.

NU is in a man-to-man defense here, with Jared Swopshire guarding Robinson, Alex Olah on Morgan, and Kale Abrahamson on Stauskas. On to the next screenshot. 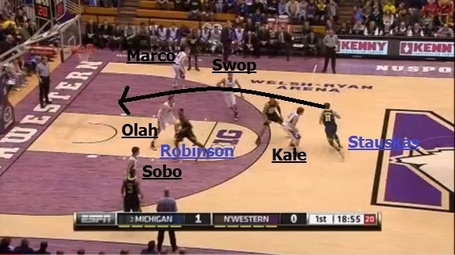 So now we see that Robinson is indeed cutting diagonally, and Morgan has set the screen for Stauskas up top. Stauskas will go around Morgan's screen, and I suspect he has two choices: If he is open on the perimeter, he can take the three-pointer, but he also has the option of driving if the lane is clear.

This is where trouble begins for NU. Swopshire and Olah appear to have switched their man-to-man assignments, with Olah now taking the cutting Robinson. Or have they? Olah certainly has sagged into the key, but Swopshire looks like he's also chasing Robinson (albeit very late). Next screenshot. 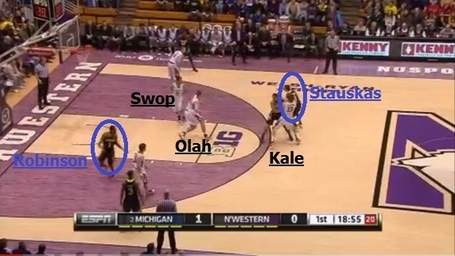 The apparent miscommunication between Olah and Swopshire is pretty evident here, as now neither is guarding anybody. Olah is trying to get to the top of the key to defend Stauskas, with Abrahamson completely eaten up by Morgan's screen, while Swopshire is nowhere in the vicinity of the cutting Robinson, nor is he close enough to Stauskas to provide effective defense on him. Stauskas is completely open for a three here, and he's deadly from behind the arc, but he chooses instead to drive, as we shall see in the next screenshot. 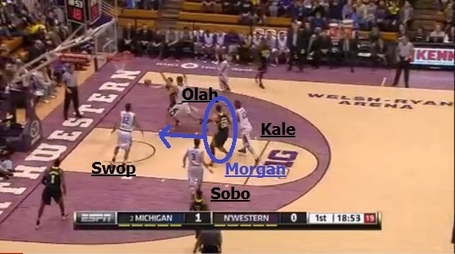 This picture just about says it all. Olah has recovered somewhat to make Stauskas' drive a little more difficult, but he still doesn't have great position. Swopshire, meanwhile, has gotten across the lane in pursuit of Robinson, but sees that Stauskas is going in for a layup and turns to see the shot. Morgan comes off from his screen to crash the boards...and nobody puts a body on him. Not Abrahamson, who is beaten into the lane. Not Swop, who is watching Stauskas. And not Dave Sobolewski, who sags down from guarding Trey Burke on the perimeter.

So, three guys have a chance to box out Morgan, and nobody does so. 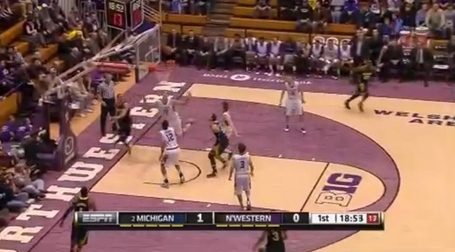 Ball is up, and everybody in white is watching it...many of them flatfooted...as Morgan gets to the basket unimpeded. 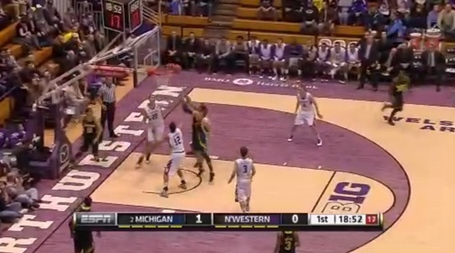 And there's Morgan with the easy putback. Abrahamson tries to challenge the rebound, but he doesn't have good position. Swopshire has either mistimed his jump or didn't react to Morgan quickly enough. Olah is off-balance from having tried to block Stauskas' layup. Sobolewski and Alex Marcotullio are watching the play.

Really, there's not much excuse for this play. The switch-off or non-switch-off or whatever was supposed to happen between Olah and Swopshire was poorly executed, leaving Stauskas open for a relatively free drive to the basket. The Wildcats might have dodged that bullet with Stauskas missing the scoop, but then they failed to put any bodies on Morgan, despite having players in position to do so, allowing him to come in unchallenged for the offensive rebound. Morgan didn't have to make some incredible, athletic play to get to the ball. The Wildcats all but rolled out the red carpet for him.

I'm not a coach, so I don't know a lot of the intricacies of X's and O's, but this seems like a pretty basic thing to teach and something that the players should know from grade school basketball-- box out, don't just stand and watch the shot. Is it the coaching staff's fault for not doing a better job of drilling this concept in during practice? Is it the players' fault for being mentally out to lunch on such a basic play? Can't quite tell from this one single play in a vacuum.