Bill Carmody was in charge at Northwestern for 13 years. A look back at what college basketball - and Bill Carmody - were like 13 years ago serves as a reminder of the job he did, and the job ahead.

Today, March 16, 2013, Bill Carmody was fired - er, well, probably fired, he could technically have resigned - as Northwestern's head basketball coach. It's the beginning of a very interesting process, and one Northwestern really hasn't had to deal with in a while.

How long has it been since Northwestern made a change at head coach? Well, a really long time.

In 2000, I wasn't a Northwestern fan. I was ten years old. I'd estimate the first time I heard or thought about Northwestern sports was in 2006, when Pat Fitzgerald took over, but even then I could not have told you anything about the school. Anything. If I had known anything, I would have seen a program in shambles. When Bill Carmody took the Northwestern job, he was taking over a program that was absolutely a wreck in the wake of the departure of Evan Eschmeyer. They'd gone to the NIT with the center, Northwestern's last NBA player, but Kevin O'Neill's squad went 0-16 in 1999-2000. Somehow, instead of getting fired, Kevin O'Neill left, to take a job with the Knicks as an assistant.

Now, I'm a Northwestern graduate. I write this website. Northwestern's program is not in shambles. They went 4-14 this year, and we consider that a horrible, horrible outcome after the injuries that befell the team. We can debate whether or not Carmody would have been the guy to do bring Northwestern to the NCAA Tournament. But there's one thing that's a fact: he will not.

How long? For starters, let's take a look at Bill Carmody in 2000. He was a 48-year-old coming off four years and four successful seasons - two NCAA appearances, two NIT appearances - at Princeton. In the press release where AD Rick Taylor announced his hiring, there's a picture where Carmody looks like this: 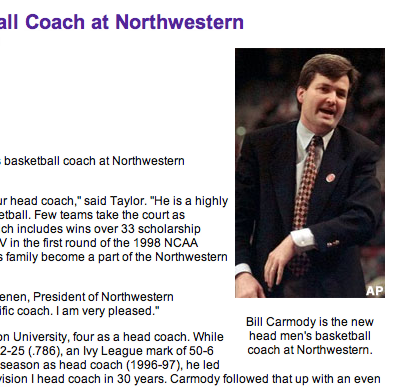 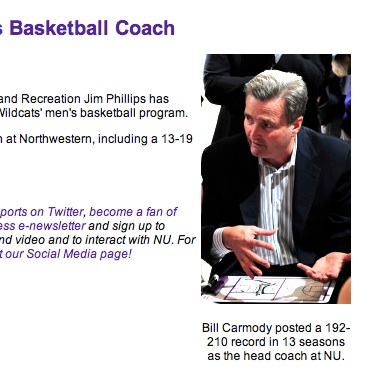 The top song in the US? "Doesn't Really Matter" by Janet Jackson.

Yes, the same Janet Jackson whose song about cats features the cat noise featured on Northwestern's PA every time they do everything good. It replaced "Incomplete" by Sisqo, which, SISQO. I'M LIKE 80 PERCENT SURE DUDE IS DEAD.

The No. 1 movie at the box office the week Bill Carmody was hired was Bring It On, the movie about cheerleading wars starring Kirsten Dunst and Elisha Dushku. In the time it took Bill Carmody to get fired, there have been four straight-to-video sequels to Bring It On and a musical adaptation. Movies that were popular when Bill Carmody was named head coach now have friggin Broadway plays based on them.

For better or worse, Bill Carmody was the face of Northwestern basketball for 13 years, and that's a long, long, long time.

Those 13 years serve as both a testament to the job he did. Nobody can take that away from him. But it also serves as a reminder of the dissatisfaction we have as a fanbase with the failure to make the NCAA Tournament, as well as the task ahead of Jim Phillips as he looks for a replacement - and of the task ahead of whoever gets that job