After a long day of waiting,, longtime Duke assistant Chris Collins will be the next head coach of Northwestern basketball, meaning the Wildcats got their first choice for the job.

Collins will assume coaching duties as soon as Duke completes its appearance in the NCAA Tournament. The news had been expected to come Wednesday, and although it took a while, it's finally officially official. Chris Collins skipped the team flight to Indy and had dinner with president Morty Schapiro somewhere in Chicago tonight. And we've got ourselves a coach. 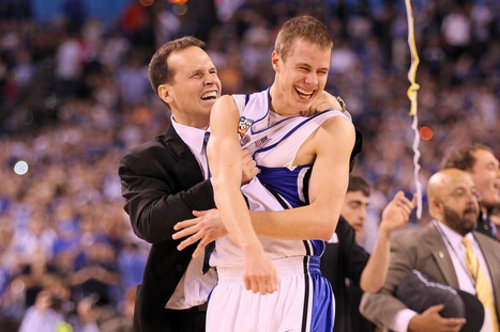 Chris Collins went quickly from being one of many candidates to NU's next coach. A look at the past two weeks

This doesn't come as a surprise: Collins' name has been linked to the Northwestern job since last year. Soon after Bill Carmody's firing, it became clear Collins was NU's first choice, and reports started leaking out that Collins was interested as well. An interview was conducted on Monday, and from then on, it seems as if this was a done deal. Other coaches were interviewed, but it never seemed as if this wasn't Collins vs. the field.

The son of Illinois native and former coach of the Chicago Bulls Doug Collins, Chris Collins was raised in Northbrook just a shimmy up the I-94 from Evanston, Collins was Illinois Mr. Basketball at Glenbrook North, playing some games at Welsh-Ryan Arena before signing up to play for Mike Krzyzewski at Duke. He'd start two of his four years at Duke, averaging 16.5 points as a senior. After a brief professional career overseas, he tried his hand at coaching, first in the WNBA, and since 2000 at Duke. Since 2008, he's been Associate Head Coach, but it doesn't seem as if Mike Krzyzewski will leave anytime soon, so Collins opted to move on after over a decade by Coach K's side.

At a school that turns off even its truest fans with its continual ability to disappoint, Collins seems to be passionate and excited about taking on the challenges of making Northwestern successful.

This seems like a fit in many, many ways. First, there's the Illinois thing. Collins understands the scene, landing Jon Scheyer for Duke out of Glenbrook North and Jabari Parker this past year, although Parker basically said he didn't consider Collins to be from Chicago. Second, there's the academic thing. Collins has been at Duke all this time, where there's a similar emphasis on academics in players, something which is a huge factor for any NU coach. And Northwestern is looking for a sea change, starting with a young, excitable guy. They're getting that in Collins, a 38-year-old taking his first head coaching job.

Of course, there are some concerns. While it's great that this is his first coaching job and Northwestern is getting an up-and-comer, this is also his first coaching job. We have no evidence Collins can be a strong head coach after being a career assistant. And fellow Coach K disciples have often flamed out, with relatively few exceptions.

But it's hard not to be excited about this.

As Northwestern basketball fans, we are used to bad news. Year after year after year, this team has failed to make the NCAA Tournament, often coming excruciatingly close. This year, they were supposed to have another chance at being selected. Instead, the team, in chronological order: suspended a key player for academics, lost its leading scorer to a shoulder injury, lost several bit players to season-ending injury, lost its leading rebounder to a season-ending knee injury, lost every single one of its final nine games by double-digit points, many blowouts, then fired its longtime coach, a man of class and character that a large part of the fanbase was in favor of retaining. In the ever-spiralling whirlpool of bad feelings that is Northwestern basketball, the past year has somehow managed to stand out as an outlier in terms of depressing news.

Here, we have good news.

Not only was the coaching search not a debacle, as many feared, NU landed its top candidate. And not just did they get him, it happened quickly and painlessly. In Collins, NU lands a hot coaching commodity with a history of success, who, at a school that turns off even its truest fans with its continual ability to disappoint, seems to be passionate and excited about taking on the challenges of making Northwestern successful.

Jim Phillips thinks Collins is the guy for the job, and Collins thinks so too. And there's a chance they're both right.

So does that mean this is going to work out perfectly? Not necessarily. Collins takes on one of the toughest coaching jobs in America. He immediately has to set out to making sure he retains top recruit Jaren Sina and the aforementioned leading scorer, Drew Crawford, who can transfer to another school immediately with no repercussions after redshirting this season. And even then, this team is not necessarily going to be talented enough to make its first NCAA Tournament. And after that, there's the job of recruiting to NU, which we have no evidence Collins will be able to pull off. Five years from now, we could look back on this hiring as a failure.

Jim Phillips, who has rarely misstepped in his time as Northwestern's athletic director, thinks Collins is the guy for the job, and Collins thinks so too. And there's a chance they're both right. So let's pour this purple into our cups, raise them, and prepare to sip to Northwestern's first NCAA Tournament appearance.