Share All sharing options for: Will Chris Collins clear staff at Northwestern?

We know officially Chris Collins will be the head coach at Northwestern, and while a lot of ink will be spilled for the most part, there's little concrete work he can do in the coming days and weeks that's perceptible to us. Recruiting, etc., but perhaps the most intriguing is who he will put on his staff - and right now, it doesn't necessarily look good for the old guys.

Yesterday morning, I looked at Northwestern's roster page on a whim - really, I wanted to see if they still by some fluke had "Bill Carmody" listed as head coach or something - and sure enough, Carmody was gone, but all his assistant coaches were there. Later?

Sure enough, all those coaches' names are gone: 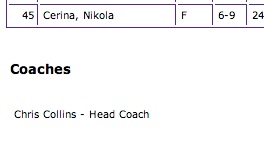 Collins' name was on the list just minutes after the announcement, and everybody else was wiped blank. We haven't heard any official reports on what will become of the rest of his staff, and it's probably a little bit silly to read into website minutiae, but sometimes it's telling, and new coaches do often like to bring their own guys - ahem, Greg Paulus.

I'd hope Collins doesn't intend to completely wipe the coaching staff clean. Tavaras Hardy is a great recruiter and a Northwestern alum, and Collins could use one of both on staff. And, I mean, Collins worked with Fred Hill at Seton Hall on Tommy Amaker's staff, and Hill is the best connection he has to an incoming recruit who could ditch the school. As excited as I am for Collins' tenure, axing both guys would seem imprudent. Sure, keeping both would also make things retain a little bit more of Bill Carmody's touch than anybody wants, but one could stay.

But again, this could also just be site maintenance.