SoP Psychoanalytics Theater: Breaking down Reggie Hearn's dream about me and him being chased by hyenas

We like to break down video replays of important moments in Northwestern games, but very rarely have the ability to analyze the dreams of its athletes. Today, we discuss a dream Reggie Hearn had where he and I were attacked by hyenas.

Share All sharing options for: SoP Psychoanalytics Theater: Breaking down Reggie Hearn's dream about me and him being chased by hyenas

Sigmund Freud taught that analyzing human's dreams provided a window into their unfettered wants and desires, the things we're unable to act out in real life become available to us in dreams, or at least I think he'd say something like that. Fellow respected professor Leonardo DiCaprio also showed the importance of dreams with his WE HAVE TO GO DEEPER Theorem of 2010.

But rarely do we actually get glimpses into the subconscious of Northwestern athletes. On the scant occasions we do, it's obviously necessary to GO DEEPER to get the full insight into Wildcat athletics and the very future of the programs we support. Unfortunately, to do this, athletes have to reach out to me on Twitter to tell me about their dreams, which doesn't happen particularly often. But luckily, Reggie Hearn did that exact thing the other day. And now, we must break it down.

@rodger_sherman had a dream I visited the SoP headquarters (which was in my hometown Fort Wayne) and met you, but you didn't look like you

So there's obviously a lot to unpack here.

And why would Hearn be visiting? Logically, we'd be interviewing him. But isn't that boring? I think it's safet to guess that Hearn has long harbored anger at me and other fellow Northwestern sports bloggers for counting him out as a regular walk-on towards the beginning of his career, and dream-fantasizes about killing me and other Northwestern media members.

Reggie Hearn does a totally not fake windmill dunk 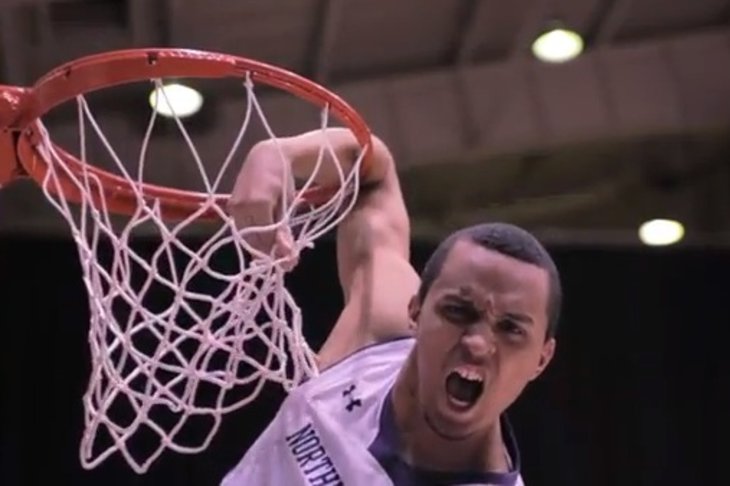 2. Why are said SoP headquarters in Ft. Wayne? Well the connection here is pretty obvious: Sippin' on Purple is vaguely named after purple drank, which is the favorite beverage of L'il Wayne, who founded Ft. Wayne as an Indiana stronghold for his followers in 2004 following a particularly bitter feud. However, more worrisome is Hearn's belief that I would open up a branch of SoP in his hometown to more closely cover his basketball exploits. Goaded on by bloggers who think its a good idea to write a 1,000 word joke post about three tweets about one of his dreams, Hearn has come to believe he is incredibly important and is now suffering from illusions of grandeur.

3. Why don't I look like me? I don't know. The real point here is that I don't think I've ever met Reggie Hearn in more than passing, so it's pretty weird he knows what I look like. Dude has been stalking me.

@rodger_sherman then we got chased by a pack of hyenas...they didn't teach us dream analysis for my psych major so I don't get it

4. Earlier fueled by murderous rage, Hearn has realized that we have bigger issues to fight than each other. The hyenas represent the struggle to survive a post-grad lifestyle in these tough economic times, and with that facing us, Hearn and me cannot quibble over the fact I thought he was not going to play basketball very often when he was a freshman. That is in the past, as we run away from laughing killer dogs.

5. Why hyenas? The lion's share -- no pun intended -- of dream analysis is based around discussing the different morphological and behavioral traits of the animals chasing you in your dreams, so this is really key. Lions probably mean you fear being taken down by some dominating, powerful force in your life, bunnies mean you are taking small things in life too seriously and/or have an irrational fear of cute woodland creatures, giant 800-foot tall crab people means you're taking acid and having a really bad trip and RUN FASTER THE GRASS IS MADE OUT OF LAVA.

So let's talk about hyenas. Yo, hyenas SUCK. They're too mangy to be cute, they're carnivores, but cowardly scavengers rather than majestic hunters -- btw, the Wikipedia literally uses the phrase "cowardly scavengers," which is kinda editorializing if you ask me -- and they are played by Whoopi Goldberg and Cheech from Cheech and Chong in the Lion King. And they actually do laugh like stupid jerks. It's a mix between "diabolical henchman" and "your least favorite roommate who actually thinks The King of Queens and The Big Bang Theory are funny after a few drinks." Ugh.

My point is, hyenas can buzz off and die. The end of The Lion King would've been better if Simba killed all of them too instead of letting them eat his evil uncle. Oh, sorry, spoiler alert. It's my firm psychoanalytical belief that Hearn's subconscious fear of being chased by hyenas is probably a manifestation of deeply vested psychological belief Hearn has built up that hyenas totally suck. It's a little bit worrisome that me and Hearn simply escape the hyenas, rather than turning to fight them, but, oh well.

6. Are there any more hyena details?

Oh. SNOW hyenas. Totally different. White represents innocence, but the black spots indicate that these hyenas have been specked or blemished.

It's pretty clear that Hearn is a deeply, deeply troubled young man. Despite his incredible growth an afterthought on Northwestern's basketball team to arguably its most important player in just four short years, I think it's safe to say that several personality traits revealed in this dream -- namely his a) self-centered thinking b) obsession with proving wrong/wanting to murder "haters" such as myself and c) crippling fear of hyenas -- were roadblocks preventing Northwestern from making its first NCAA tournament while Hearn was playing.

Anyway, that's it for now. If any other Northwestern athletes would like me to analyze their dreams -- PREFERABLY dreams including Sippin' on Purple -- you know where to hit me: