Plays of the Week: Running Kain

Share All sharing options for: Plays of the Week: Running Kain

Kain Colter's statline from Saturday is a reminder why he is one of the most exciting players in the Big Ten: 14 carries for 161 yards and 4 touchdowns along with 9 catches for 131 yards. OK, so 1-3 passing for 2 yards and an interception is bad. How many quarterbacks led their team in receptions, receiving yards, rushing yards, and touchdowns this week? That's what I thought.

Colter's touchdowns were the crowning achievements of a day that saw Northwestern gain almost 400 yards on the ground. Northwestern did this by taking advantage of an aggressive Indiana defense that sent the linebackers flowing hard at run action. While Indiana's strategy successfully limited Northwestern's outside zone and speed option plays, Mick McCall used two kinds of runs to take advantage of the defense. The first was a type of counter in which the running back would take a handoff heading one way and immediately cut back in the other direction. The other was the simple zone read, with Colter riding his running back until the defensive end committed just enough to open a running lane.

The Northwestern offense didn't start the game well, punting on its first drive and losing the ball on a Kain Colter interception on the second. On the third, five runs took the ball from the NU 20 to a 3rd and 2 from the Indiana 8. Northwestern brought Kain Colter, who had taken two plays of the drive off, back in as the quarterback and lined up in a pistol formation with two tight ends and a fullback. indiana packs most of the defense in the middle of the field, with a safety shaded to the single wide receiver side. 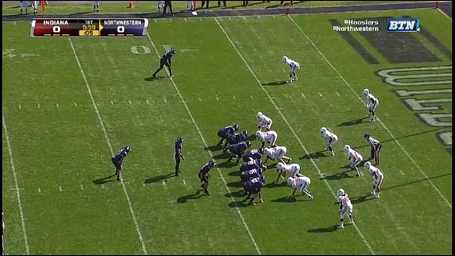 Before the snap, Tim Riley motions from the fullback position to a position wide right. The corner near the line widens out to cover him. 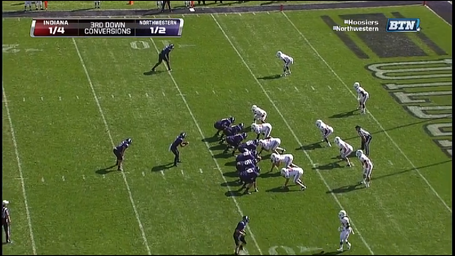 After the snap, Colter opens up for a zone read, reading the defensive end to the offense's right. Brian Smith, the tight end on the right, heads for a linebacker, Riley blocks the corner, and the other two linebackers look for Mike Trumpy heading left. 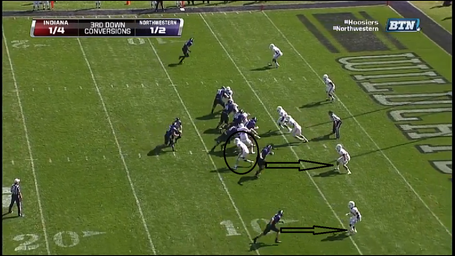 Colter and Trumpy mesh at the 12. Rather than simply decide on the spot whether to give or keep, Colter rides the mesh to the 10, at which point the defensive end is definitely committed to Trumpy. Meanwhile, the Indiana linebackers get caught up in the mess at the line of scrimmage. 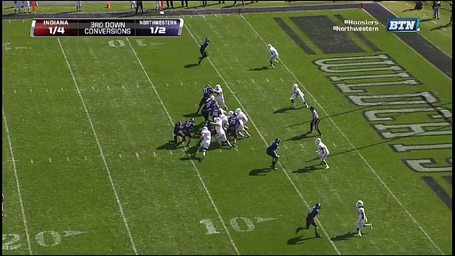 Colter heads right and cuts inside Smith's block for an easy touchdown. 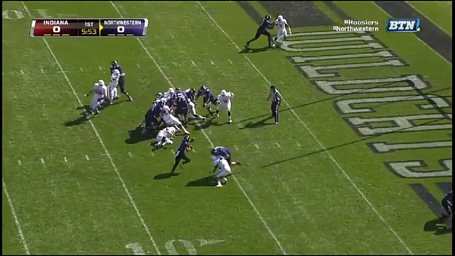 This was well designed and executed. Riley's motion effectively neutralizes the most dangerous perimeter defender, while the extended mesh allows Colter to make a clearer decision than he would have with a more conventional stationary mesh. This leaves the offense needing only one block. Brian Smith takes the linebacker outside on this play, but he is under no pressure to do anything but get in the defender's way, as Colter has plenty of room in either direction.

The next touchdown came in the second quarter. Northwestern once again has the ball at the Indiana 8, though this time it is 1st and goal. NU lines up with split backs and three receivers. Indiana commits three defenders to the twins side, while they shade the linebackers towards the single receiver side. 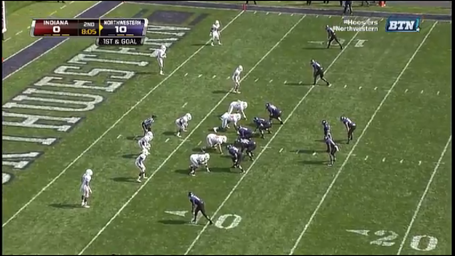 Trumpy, lined up as the right running back, starts in motion to the left just before the snap. After the snap, Colter meshes with Venric Mark like the play is a zone read. I say like a zone read because Patrick Ward blocks the defensive end, and the linebackers flow to the offensive left; if someone is being read, I am not sure who it is. 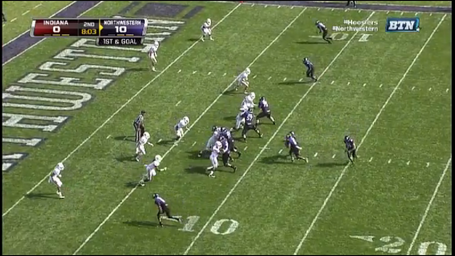 Colter once again rides the mesh before pulling the ball late. In this picture, Indiana has three unblocked players in position to defend Colter and Trumpy on the option. 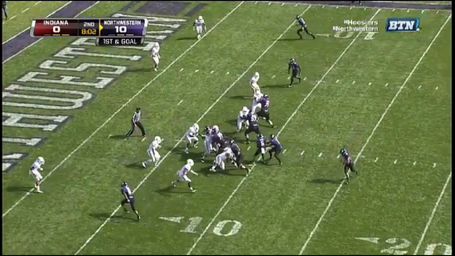 Fortunately, one of those unblocked players stays with Mark coming up the middle. Another runs upfield to take Trumpy. Patrick Ward quickly disengages from the defensive end to pick up the third, once again creating a nice lane for Colter to pick up the touchdown. 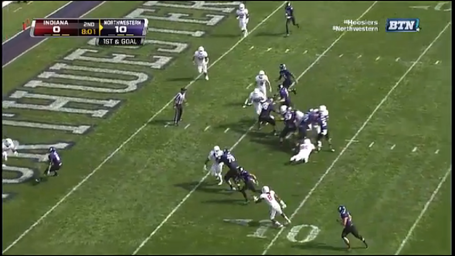 I'm not sure what happened to Ward at the start of the play, but he deserves major credit for coming off that block to seal off the lane for Colter. Once again, an Indiana player on the perimeter is taken out of the picture accounting for a running back, this time as the pitchman on the option rather than a receiver.

Colter's next touchdown came on the first drive of the third quarter. NU reached 3rd and 3 from the Indiana 15, and McCall sent on Colter to pick up the yardage. Colter lines up in the same formation as above, once again with Trumpy to the right and Mark to the left. 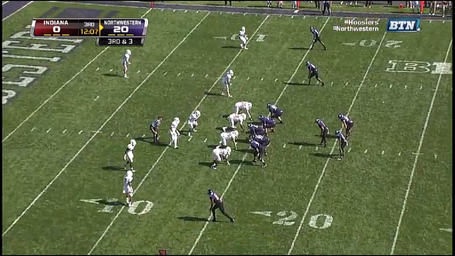 This time, Colter meshes with Trumpy. He makes this read quickly as the defensive end sits too far inside. 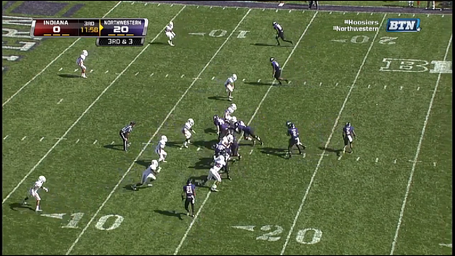 The receivers to the right are heading for the outside corner and safety, leaving the inside corner for Colter to read. With the closest linebacker blocked, the only question at this point is whether Mark or Colter is going to pick up the first down. 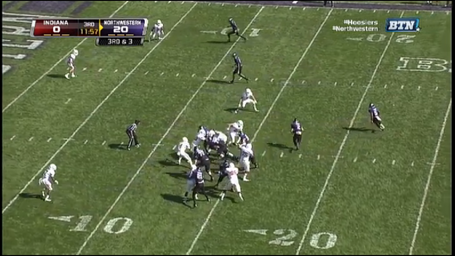 Colter answers that question with a shoulder fake that convinces the defender to commit to Mark. First down, Northwestern. 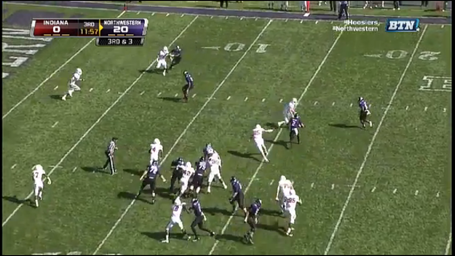 The Indiana cornerback on the outside does a good job of getting off of Rashad Lawrence's block and making a hit on Colter. Colter, however, is not very impressed by this attempt at a tackle and continues into the end zone. 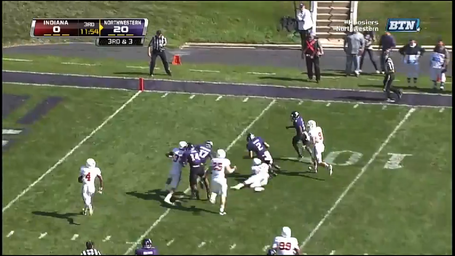 Once again, Northwestern was able to get a clean pitch read, and once again the Indiana defender took the pitch man. The mesh with the dive back was quicker on this play; I suspect that this is something that Colter is allowed to work on the fly. In this case, the defensive end had no hope of stopping Colter from the start, so he didn't bother riding the mesh to make the end commit. The play should really only have brought up first and goal at about the 6, but the corner failed to at least hold Colter up enough to allow help to arrive.

Colter's final touchdown came in the fourth quarter, when Indiana had closed the deficit to 8 points. After an Indiana punt, 7 rushes brought from the NU 38 to a 2nd and 10 at the Indiana 22. This time, Colter brings the offense out with Mark in the pistol and trips right. Indiana lines up with a four man line and a linebacker at the line of scrimmage on the trips side.

Colter reads that linebacker, as the corner to the single receiver side blitzes and the trips receivers head downfield to block. 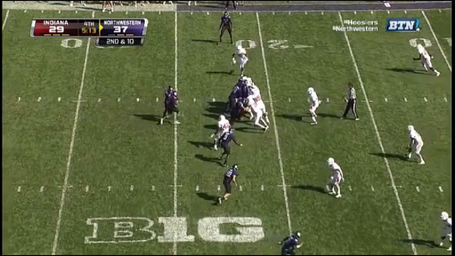 Colter's read here is excellent. The linebacker is in decent position to stop the keeper, but he is entirely focused on Mark, allowing Colter to slip outside him where three receivers are heading for three defenders. The corner blitz, which might have helped against a Mark run, has the side effect of forcing the safety on that side to head away from the run to cover Tony Jones. The end result is seven defenders staring at an empty-handed Venric Mark, one running away from the ball, and three more with receiver blocks in their faces. If you are counting, you should quickly realize that nobody is left to take Colter. 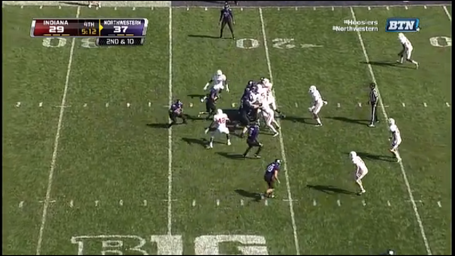 The defense still almost makes a stop, but Dan Vitale and Demetrius Fields are able to open a crease between two defenders. Colter bursts through. 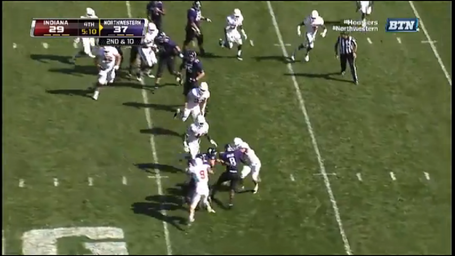 The cornerback, meanwhile, has retreated to the goal line where Rashad Lawrence ensures that he can't prevent the touchdown. 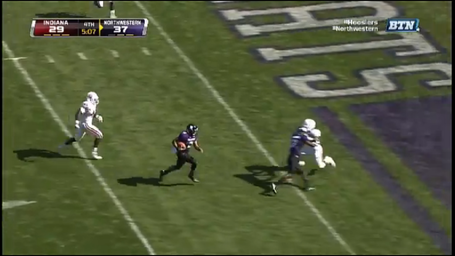 Jeff Budzien's extra point closed scoring for the day. At this point, Indiana had put together a 29-10 stretch following NU's touchdown on the opening drive; Colter's touchdown put Northwestern back in the driver's seat. Though the defense managed to stop the Indiana offense on the next drive, I don't think I am alone in giving a ton of credit to the offense for providing a larger margin for error to the defense with this touchdonwn.

Obviously, the big question is what we can learn from Colter's monster day about what the offense will look like during the rest of Big Ten play. Against Indiana, Colter's primarily came in to run plays like these, mostly in short-yardage and goal line situations, though he got a few drives as a changeup from Siemian's more balanced offensive package. I think that he can be effective in this role against other Big Ten teams. Though Indiana's defense is certainly less talented than most of the rest of the conference, all these runs were set up to gain a numerical advantage on the edge. More athletic defenses will be more likely to catch Colter from behind or to get off their blocks and limit gains, but they still only get to play with 11 players. If the offensive line and running backs can force defenses to commit numbers to the box, these plays on the perimeter will be there all season long.