Share All sharing options for: Plays of the Week: Venric Mark's Big Day

The offense against Minnesota was a one-man show put on by Venric Mark. This was partly a result of the weather, which seemed to limit the passing game and Kain Colter's ability to make moves in space, and partly a result of awful play from the Minnesota linebackers and safeties in the first half.

Two weeks ago, Iowa dominated the first half of their game against Minnesota with big plays on the ground. After Minnesota handed Northwestern the ball on the Minnesota 26 thanks to a mishandled kickoff, Northwestern showed that they had seen that game tape.

Northwestern comes out with Kain Colter at quarterback and Venric Mark to his right, with trips left and a tight end right. Minnesota responds with a 4-3 over front (meaning the defensive line is shifted towards the tight end), with the secondary lined up well off the receivers. Their alignment should let them play the run with 8 men, but 5 of these are to the right of the center and only 3 to the left. This is a problem for the Gophers. 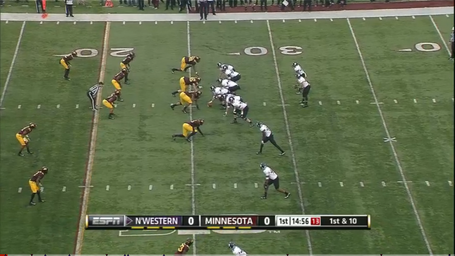 Northwestern runs inside zone to the left with no read of the defensive end. The receivers run a bubble screen, which could have gained a few, but Colter is handing off all the way. The blocking kicks both defensive ends out and both guards are able to release to the second level. There is a massive hole between left guard Brian Mulroe and left tackle Patrick Ward. 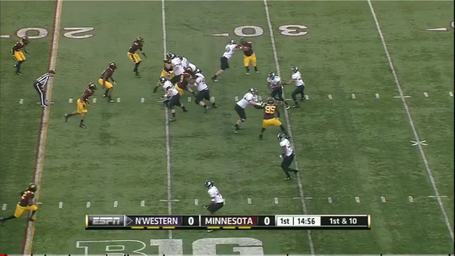 As Mark heads into the hole, the Minnesota linebackers run straight into the guards and get taken out of the play. The safety to the left widens to play the bubble screen, while the other safety is too slow to cut Mark off. He runs for the score untouched. 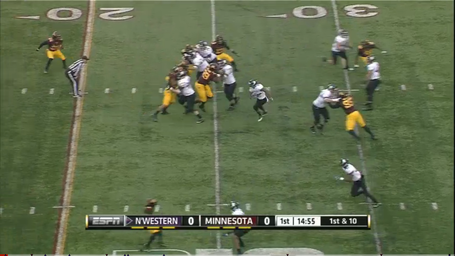 I don't want to take anything away from Mark or the offensive line on this play, but Minnesota made their jobs easy. In theory, Minnesota's alignment gave the defense the numbers to play the run; in fact, they left half the field undermanned. The linebackers were extremely slow to flow to the play, allowing Northwestern's offensive line to get good blocks. If you look at the last picture again, the nose tackle is farther left than the weakside linebacker. This is because the linebacker failed to play the weakside B-gap that was (presumably) his assignment, instead gently running into the offensive guard trying to seal him inside. Getting solid blocks on linebackers is hard, so credit Mulroe for making good contact and sustaining the block, but his job was made much easier by the linebacker's failure to fight to maintain leverage.

On the next drive, Northwestern comes to the line on a 2nd and 5 at the Northwestern 40 in a 4 receiver formation with superback Dan Vitale in the slot. Minnesota puts the strength of their defensive line to the offense's right and splits a safety over Vitale. 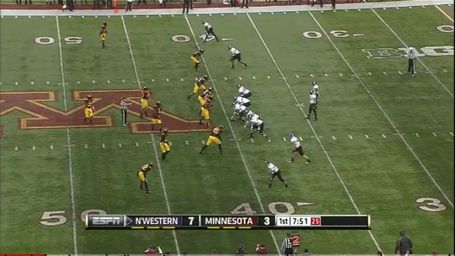 Vitale motions to the right side of the formation, and Minnesota drops the safety over his initial position to the middle of the field and walks the other down over Vitale's new position. Once again, Minnesota has eight men in good position to play the run. 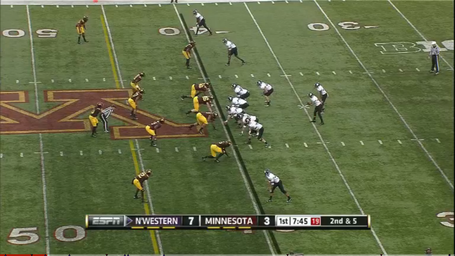 Northwestern runs the same play as above, inside zone with no read. Instead of the bubble screen from the first play, Tony Jones comes from his position as the left receiver to block the safety. The playside linebacker shoots the left A-gap, while Patrick Ward seals the defensive end outside. This opens another massive hole to the left, though the safety or corner should be able to make a tackle. 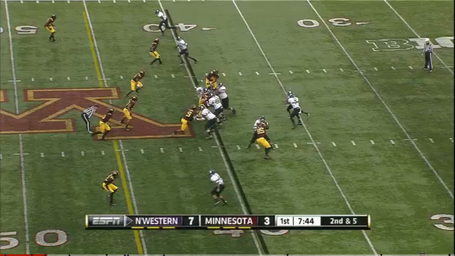 The safety and middle linebacker come close to Mark, but Jones is able to take both out of the play with one block. The corner tracks Jones inside and loses contain, allowing Mark to tear off a 47 yard run. 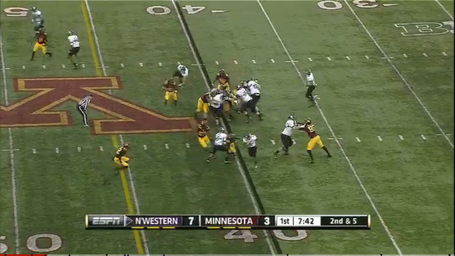 Once again, numbers in the box couldn't rescue Minnesota from their own mistakes. It isn't clear who is supposed to be filling the left B-gap. The safety and middle linebacker both head straight for Mark instead of working together to contain him, setting Tony Jones up to spring Mark to the outside. The corner is completely lost, letting Mark get outside. Once again, Mark and the blockers (particularly Jones) deserve credit, but Minnesota makes the offense's job easy.

After David Nwabuisi's second quarter interception, a 9 yard Venric Mark run off an option pitch set up a 2nd and 1 at the Minnesota 48. Northwestern comes out in the pistol with Mark as the tailback and Tyris Jones as the fullback. Minnesota has three players lined up in loose man coverage with the other eight keying on the run. This time, Northwestern runs power towards the defensive line's strength. 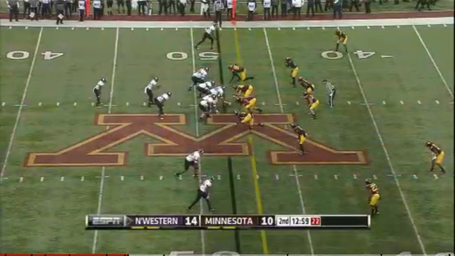 The blocking is perfect. Tyris Jones kicks out the playside end, while Neal Deiters crushes the 3-technique inside and Jack Konopka releases straight at the middle linebacker. Brian Mulroe pulls from his left guard position to lead Mark through the hole. 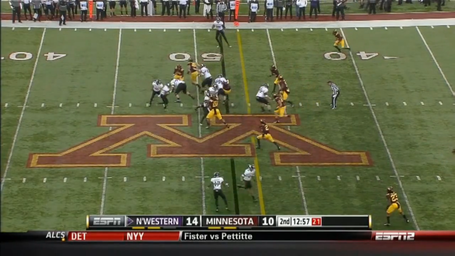 Mulroe gets a good block on the playside linebacker. Konopka gets just enough of the middle linebacker to keep Mark clean, while the third linebacker gets tangled up in the block. With three defensive backs keeping an eye on the receivers and the fourth playing to contain Mark, there is a massive seam in the middle of the field, which Mark is more than fast enough to score through. 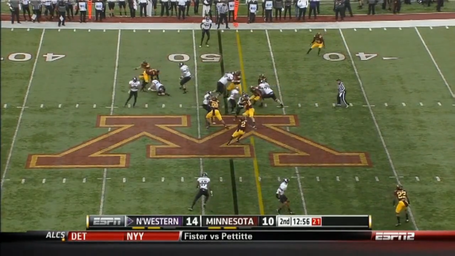 As with the first play, Minnesota emptied the deep middle of the field to play the run. The receiver screens once again helped to draw defensive backs away from the middle of the field to open the seam. Inside, the only block that was less than perfect was Konopka's block on the middle linebacker, though helping to pick off a second linebacker helps redeem that block. Unlike the first two, Minnesota didn't make any glaring errors on this play; Northwestern's line simply dominated their front seven to spring Mark for the touchdown.

I would like to conclude by writing about how well Northwestern's run game worked and how this should indicate more success to come, but I don't think that would be justified. Mark got to flash his big play ability against Minnesota more because of Minnesota's poor linebacker and safety play than because of anything he or his blockers did. Credit is due to the offense for executing on these plays, but the defense did everything it could to make the offense's job easy. In the second half, Minnesota cleaned up their play and the offense struggled to maintain drives.

On the whole, I am willing to take a road win in bad weather without too much distress, but the offense has struggled two weeks in a row now. The good news about this week is that Nebraska's defense has been susceptible to the run in the past. The bad news is that it is unlikely to hand Northwestern multiple long runs quite as easily as Minnesota did. Everyone on offense will need to be sharp to score points on Saturday.