Plays of the Week: Three and Out

Share All sharing options for: Plays of the Week: Three and Out

In the fourth quarter, Northwestern went on offense for the first time in the quarter with a three point lead, needing to, at the very least, move the ball and run some clock. Instead, the offense went three and out and Penn State would march down the field to take the lead. While the defense deserves some blame for allowing multiple long scoring drives, the offense's failure to move the ball set up the defensive breakdown. The three and out with a 28-25 lead was the most important of these offensive failures.

On first down, Northwestern lines up with Trevor Siemian at quarterback, Mike Trumpy at running back, and two receivers to each side. Kain Colter is the slot receiver to the right. Penn State, as they did for most of the game, cheats the defenders over the slot receivers towards the box. 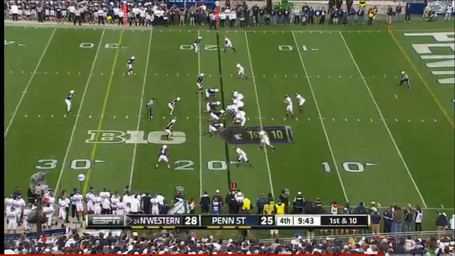 Dan Vitale motions from the left slot into the backfield. Gerald Hodges steps away from the box. 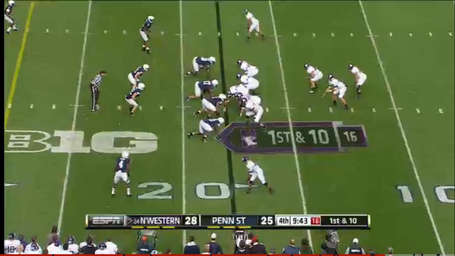 At the snap, Siemian opens to Trumpy on an inside zone. The line works to the left, while Vitale attempts to seal the defensive end to the right. 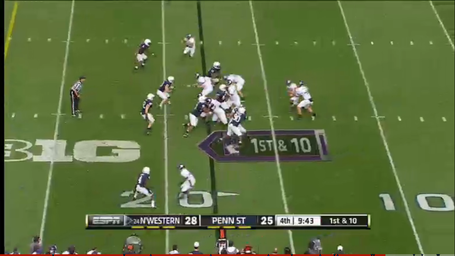 The blocking isn't very good. Vitale fails to cut the end, allowing the defender to keep his feet and get a hand on Trumpy. Colter comes inside to block Hodges, but Colter has no chance because Hodges is so far inside him at the snap. Jack Konopka gets a free release to the second level and engages Mike Hull, but Hull holds his ground and remains unmoved. Nobody gets a block on Michael Mauti. Trumpy heads inside Vitale's block, but Hull and Hodges are able to squeeze the crease shut for a two yard gain.

On second down, Colter moves to quarterback and Northwestern lines up with three receivers right and a tight end left. Penn State keeps two safeties deep and puts seven in the box, not even pretending to respect the bubble screen. 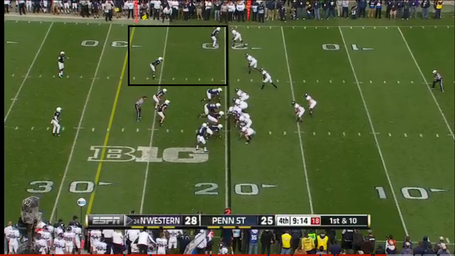 At the snap, Colter meshes with Trumpy and reads the defensive end. The outside receiver runs a fade, while the inside two receivers set up for a bubble screen. 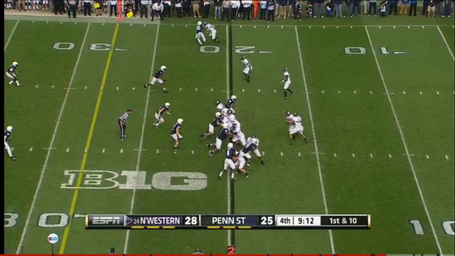 If Colter pulls the ball and throws outside, this should be an easy five yards or more. Instead, he sticks with the zone read. The end stays home, so Colter gives the ball to Trumpy. 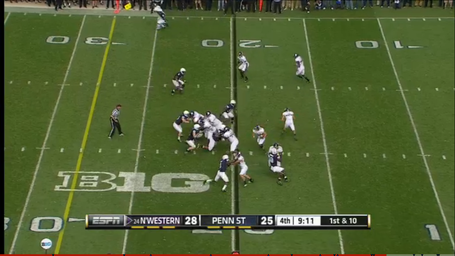 The first level blocking is fairly good, opening a decent hole. Unfortunately, the offensive line once again can't get to Mauti. Leaving the defense's best linebacker unblocked on the playside=2 yard gain. 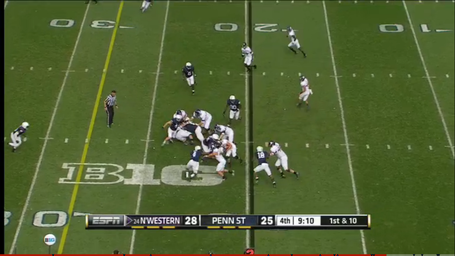 On these two plays, Penn State played the inside run hard, and Northwestern failed to punish them for it. The Penn State front seven did a great job on both of occupying blocks without being taken out of the play, while the Northwestern line couldn't get the second level blocks needed to spring Trumpy.

On third down, Northwestern sends Siemian back to quarterback. Dan Vitale motions across the formation from the left slot to become the inside man in a trips formation. Penn State crowds the line and shows man coverage behind. 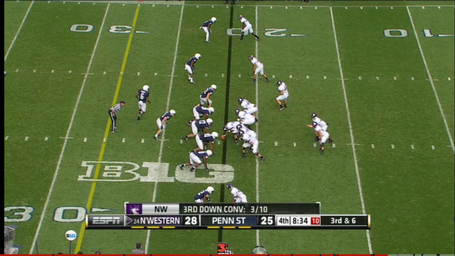 Penn State brings the blitz, and Northwestern is able to pick it up well enough. The outside receivers both run fades, Vitale heads for the flat, and Colter tries to release inside, though he is effectively rerouted by the Penn State defender. Lawrence gets a good release and Siemian sees his chance. 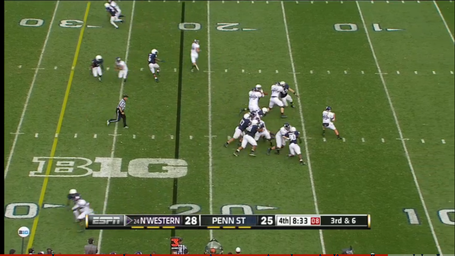 Lawrence is able to establish a great cushion, but Siemian's throw sails over his head. Northwestern punts on fourth down.

Each of these plays has a simple explanation as a failure of execution. Northwestern had the numbers to block the runs on first and second down, while throwing a fade is one of the standard responses to man coverage with a blitz. On third down, it is hard to see what other option there was. The first two downs, however, played to Penn State's strengths. Both were straightforward runs up the middle. While the second down play got Colter involved, the end was easily able to force the give. On both downs, Penn State left the perimeter poorly defended with their alignment, keeping two safeties deep and cheating players inside to play the run. Spread offenses are supposed to punish that kind of defense with quick throws and outside runs, but Northwestern failed to do so.

This drive was a great example of the broader struggles of the Northwestern offense against Penn State. A week after Kain Colter shredded the Indiana defense on the ground, he was frequently relegated to watching from the slot as Siemian handed off. When Colter was in at quarterback, Northwestern allowed Penn State to devote their full attention to stopping the run even when the defense lined up in completely unsound formations. In passing situations, the Penn State back seven did a great job of redirecting receivers, especially Colter, preventing easy throws, while Siemian struggled to make the hard throws. Venric Mark was good when he got the ball, but he was kept off the field for much of the game. Penn State's defense is very good, but Northwestern's offensive approach failed to take advantage of real weaknesses.