Share All sharing options for: Plays of the Week: Dion Sims's Seams

On the whole, the Northwestern defense was effective against Michigan State, holding LeVeon Bell scoreless and without any big runs, keeping Andrew Maxwell's completion percentage under 50%, recording four takeaways, and stopping the Spartans twice on fourth down. The only Spartan offensive player to have significant success was tight end Dion Sims, who finished the game with 102 receiving yards off only 5 receptions.

The longest of those receptions came on Michigan State's second drive of the game. After a 3 yard LeVeon Bell run on first down, MSU comes out in a singleback formation with a tight end and a wide receiver to each side of the field; Sims is the tight end to the right. Northwestern responds with their usual 4-3 under, treating the field side as the strong side of the offense. The secondary is in the usual 2-deep shell with the corners playing off; Northwestern doesn't have a more vanilla defensive look than this. 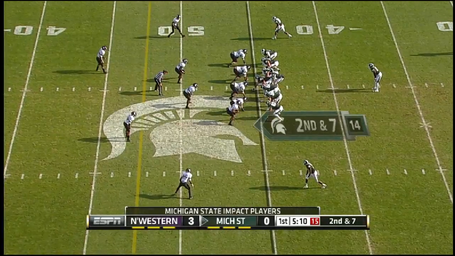 The defensive call, however, is a blitz. On the defense's right, Quentin Williams loops outside, while Damien Proby and Chi Chi Ariguzo both rush inside him and Jared Carpenter comes down from his safety position to join the undercoverage. On the other side of the line, Tyler Scott drops into coverage as the third undercoverage player. The MSU receivers and tight ends release vertical, while LeVeon Bell steps up to help in the protection. 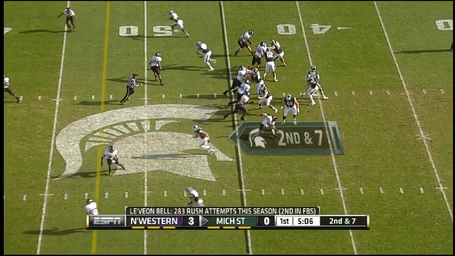 At 12 yards, the wide receivers break outside, while the tight ends continue up the seam. David Nwabuisi carries Sims 10 yards deep before planting his feet and releasing Sims to the deep coverage. 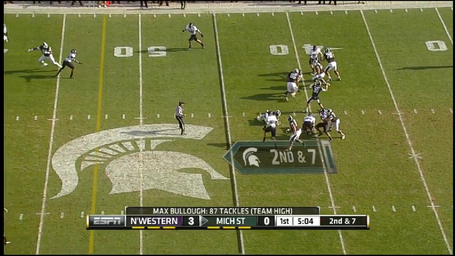 Because Ibraheim Campbell has to worry about both seam routes, he cannot come over to pick up Sims. This leaves the tight end wide open. 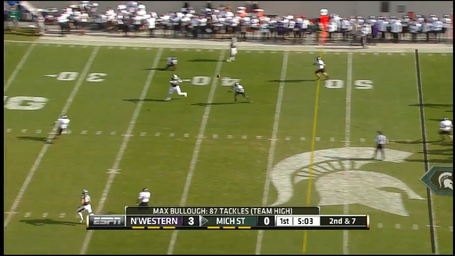 Sims catches the ball at the 35; Campbell completely misses the tackle. Nwabuisi and Carpenter hit Sims at the 25 and get dragged to the 11 for a total of 44 yards on the play.

Other than the poor tackling, which is a common result of trying to bring down a 6-5, 285 pound tight end, this play was an example of Michigan State taking advantage of a weakness in Northwestern's 3-deep coverage. Since the corners have to play the out routes from the receivers, the two seam routes give Andrew Maxwell a 2-on-1 against Ibraheim Campbell. Campbell's only choice is the one he makes, keeping between the routes and breaking on the throw; if he commits to one route early, the play should go for a touchdown to the other. Northwestern's only hope is for the undercoverage players (Nwabuisi and Carpenter on this play) to recognize the problem and carry those seam routes deeper. Carpenter does better than Nwabuisi with this, but neither player is in position to prevent a completion.

Sims got his next reception on an almost identical play. In the second quarter, MSU lines up for 2nd and 10 in the same formation, once again with Sims as the right tight end. Northwestern is in the 4-3 under, treating the field side as the strong side. This time, Ibraheim Campbell walks down to form an 8-man front. 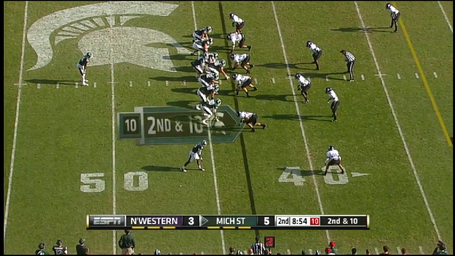 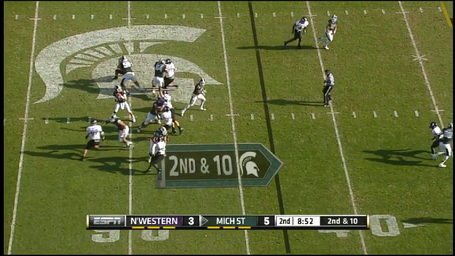 Campbell is never actually blocked, but he has to sort through enough traffic that he can't get to Maxwell. Damien Proby does the same thing that Nwabuisi did on the first play, carrying Sims 10 yards before handing him off to Jared Carpenter in the deep middle. The result is similar. 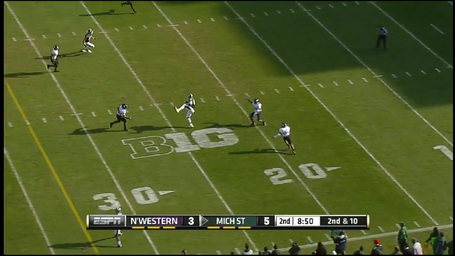 Fortunately, Sims has to jump to bring this throw in and falls down after the catch.

This wasn't the last time Michigan State looked to Sims down the seam. On the final Spartan drive, Michigan State faced 4th and 10 from their own 20 with only 1:15 remaining and no timeouts; a failure to get the first down would end the game. MSU lines up in a balanced three receiver formation with Sims on the offensive left and Maxwell in the shotgun. Northwestern responds with a 3 man line, with 3 linebackers and the nickelback all close enough to the formation to blitz while the safeties are almost 15 yards deep. 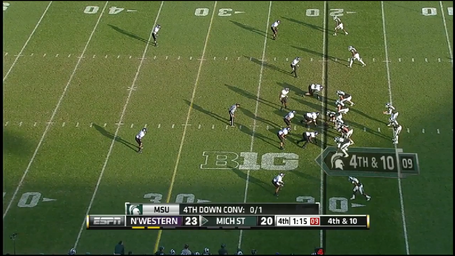 Of the potential blitzers, only Chi Chi Ariguzo rushes. Northwestern plays man coverage with 2 safeties over the top, while MSU runs 4 verticals. 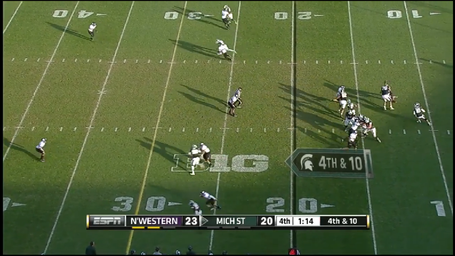 Jimmy Hall draws responsibility for Sims, and the tight end easily wins the matchup by releasing outside before bending his route back inside to create a window. Maxwell's throw is right on target. 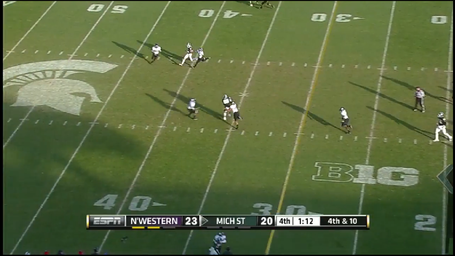 Though the throw is good, Sims has a hard time securing the ball, and when Ibraheim Campbell arrives from his deep safety spot, Sims still has the ball held away from his body. Campbell's hit jars the ball loose, and the officials rule the pass incomplete. Since Hall is able to collect the loose ball, Northwestern would have won even if the play had been ruled a catch and a fumble. Still, Sims was able to abuse the coverage once again, making the proper adjustment to his route against man coverage, and Maxwell was able to deliver a throw on time and on target. Credit is due to Campbell for knocking the ball out, but Northwestern's coverage had no answer for Sims on this route.