Plays of the Week: Winning on the Line

Share All sharing options for: Plays of the Week: Winning on the Line

Michigan State has some offensive line issues. This shot comes from an early run play. 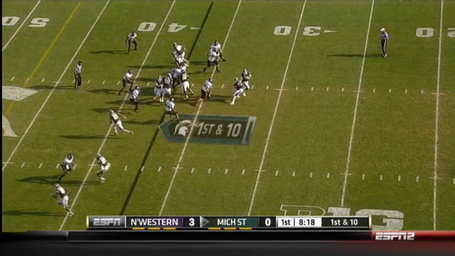 I'm not going anywhere with this, just thought it was awesome. Not as awesome as this, but still pretty awesome.

While Michigan State's run blocking was decent during the rest of the game, the same cannot be said for their pass protection. The Spartans had a particularly serious problem when Northwestern sent players other than the down linemen. The second play from yesterdays post was like this; though Andrew Maxwell was able to get the ball out in time, Ibraheim Campbell got through unblocked.

The result was significantly better on Michigan State's first drive of the second half. After picking up a first down, Michigan State lines up in an I-formation. Northwestern lines up in the 4-3 under, with Ibraheim Campbell walked into the box on the weak side of the formation. 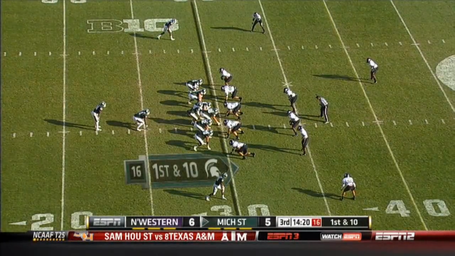 Michigan State looks to take advantage of Northwestern's 8-man front by passing. Maxwell takes a straight dropback while the receivers and tight end release on route. Both running backs set up to pass protect on Maxwell's left. Northwestern sends 5, with Ibraheim Campbell coming from the offensive right in addition to the 4 down linemen. 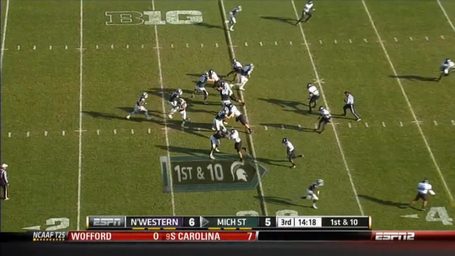 I think that Michigan State is in a man protection scheme. If I am right, the line is responsible for the 4 linemen and one of the linebackers, while the running backs are each responsible for one of the linebackers. This also means either that Maxwell is responsible for throwing hot if the eighth man, Campbell, blitzes or that the protection has no way of accounting for that eighth man. Since no linebackers rush, the fullback releases to the left flat, while LeVeon Bell looks to help the offensive line on the left side. Maxwell hits the back of his drop and keeps looking downfield. 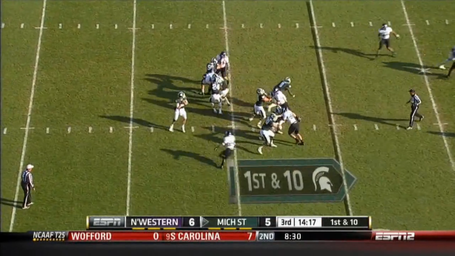 Campbell hits Maxwell just as he is throwing, and the ball floats into David Nwabuisi's waiting hands. 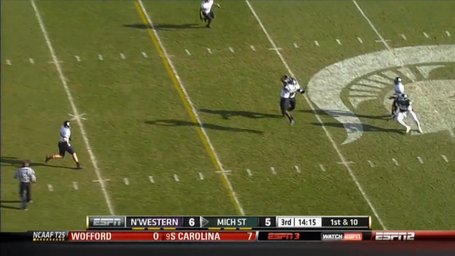 This wasn't the end of MSU's pass protection problems. Later in the third quarter, MSU lines up in a balanced singleback formation and Northwestern responds with the 4-3 under, this time with both safeties deep. 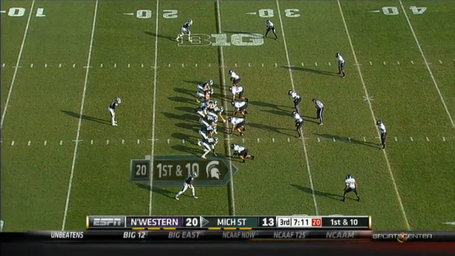 Once again, MSU goes to a dropback pass. Maxwell takes a seven step drop while the receivers and tight ends all release immediately. Chi Chi Ariguzo rushes from the offensive left, while Tyler Scott drops into coverage on the right. LeVeon Bell is once again in the protection, initially looking for a rusher to Maxwell's right. 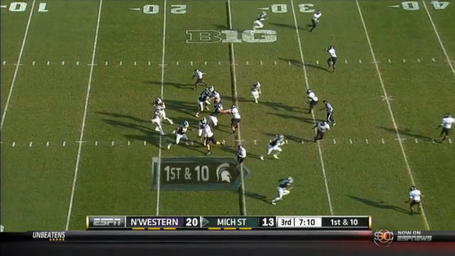 With the left guard and tackle double teaming Quentin Williams, Ariguzo has a free run. Bell Tries to move over to pick Ariguzo up, but the running back is too late to do stop the rush. Ariguzo hits Maxwell during his windup to pick up the sack. 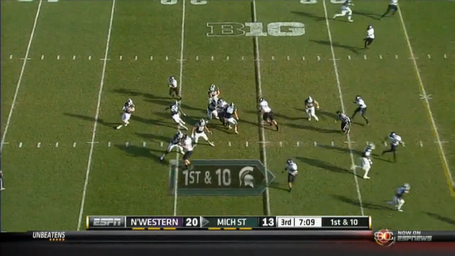 I don't have a good guess at MSU's protection on this play. Whatever it was, it left Bell in an impossible position.

Northwestern's final sack came on the same line slant. After driving into Northwestern territory down 23-20, Michigan State lines up on first down in an I formation. Northwestern is, as usual, in the 4-3 under, this time with Ibraheim Campbell in the box on the strong side. 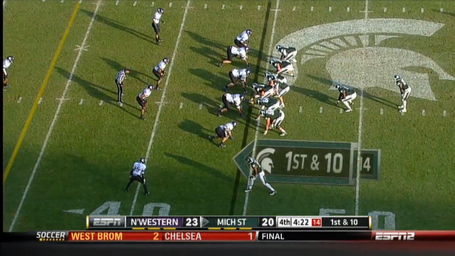 Michigan State wants to go deep off play action. As Maxwell makes his fake, the MSU offensive line slides to their left, with LeVeon Bell looking to pickup a rusher from the right. Northwestern is in the same defense as the last play, with Drew Smith rushing from the offensive right and Tyler Scott dropping into coverage. With both the tight end and fullback immediately releasing into the patter, MSU's slide protection leaves them with an awful situation on the right. 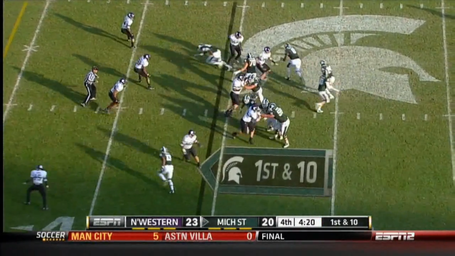 The MSU offensive line only blocks the defensive tackle, leaving Bell to pick up both Dean Lowry and Drew Smith. Bell correctly decides to pick up the inside rusher, Lowry, but this leaves Smith with a free run at Maxwell. To make things worse for the quarterback, Bell's attempt to cut block Lowry only slows the defensive end down. This is the result. 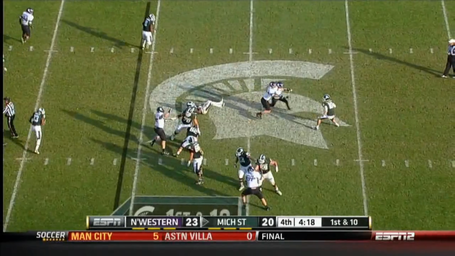 Smith wins the race and brings Maxwell down; two plays later, Michigan State would punt the ball on 4th and 8.

On all three of these plays, Michigan State tried to take a shot downfield on first down. Against a team with a shaky secondary, this strategy makes sense. If the protection can't pick up all the rushers, however, the secondary hardly matters. I can easily understand the first play; Campbell disguised his rush well, leaving Maxwell without many options. I don't understand the other two. Not only does Northwestern run this slant frequently, most other 4-3 under defenses have the same call. Failing to be prepared to pick it up makes no sense. I would say that Illinois will do better, but this is Illinois, a team that has given up a Big Ten leading 37 sacks this year.. Don't be surprised if Northwestern picks up a few more easy sacks next week.