Share All sharing options for: Plays of the Week: Fat Man Touchdown

Paul Jorgensen is listed on the depth chart as Northwestern's backup left tackle, but this year he has been wearing 81 and lining up as a tight end. For the most part, his job is to be the sixth lineman in run-heavy packages. Against Illinois, Mick McCall dialed up a play to reward his effort with a touchdown.

In the third quarter, an Ibraheim Campbell interception set Northwestern up with great field position. Northwestern comes out with most of the offense clustered behind the offensive line. 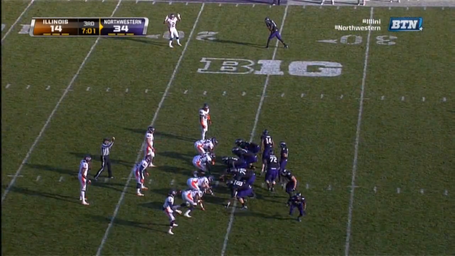 At first glance, the offensive line looks normal. A closer look reveals that left guard Brian Mulroe is in the backfield, with Patrick Ward lined up next to the center and Jorgensen outside Ward. Northwestern shifts to the final formation. 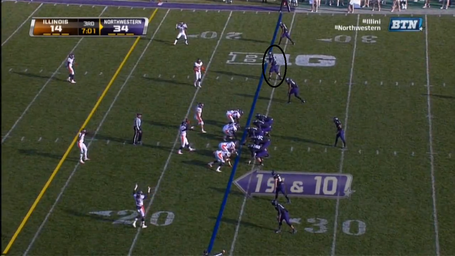 The circled player is Mulroe, who is ineligible as a receiver. At the snap, 4 receivers release vertical while Mike Trumpy and Mulroe turn towards Kain Colter as though they are looking for a screen. 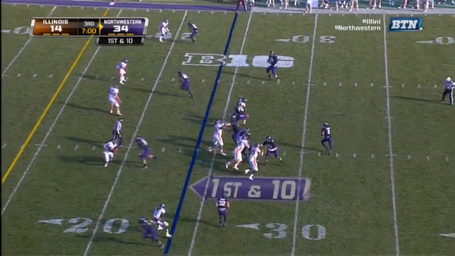 While Mulroe isn't eligible as a receiver, his route offers the possibility of drawing an inattentive defensive back up. On the offensive right, the defense doesn't seem to bite on Mulroe's fake; on the left, Trumpy's draws in the corner. Illinois lets Jorgensen run straight up the seam, leaving him wide open. 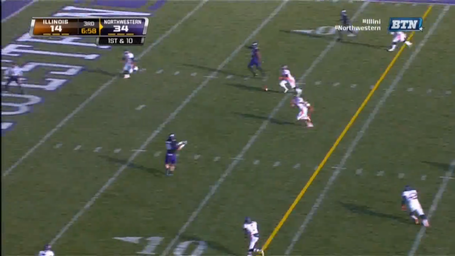 It looks like Illinois is in cover-2, so four verticals was going to cause troubles no matter what. Lining Jorgensen up where you would expect an offensive lineman only increases the defense's confusion, as the safety to his side of the field bails outside to cover Tony Jones coming down the sideline while the other safety picks up the seam route on his side of the field. This leaves Jorgensen in position to score an easy touchdown.

This play put Northwestern up 41-14. The play design is nice, requiring only three offensive players to do something they aren't used to, but it wasn't really needed to put the Illini away. I don't worry much about running up the score; the offense is under no obligation to quit playing football just because the defense can't stop them. A part of me does wish that the staff had kept this under wraps for the bowl game, though. Still, it was cool to see an offensive lineman get a score, and if it takes a trick play to do that, then so be it.