Next on the Chopping Block: Mississippi State

Four (Five!) times this year, and, well, every year, NU plays an out-of-conference opponent. The question arises: who are these guys? Some people only want to know who they are in a football sense, but, to truly understand our opponents on the gridiron, you have to know where they come from, so football strategy can wait. I plan on getting to know these universities a little bit better with posts slandering each college, mainly with info gleaned from their wikipedia pages.

Share All sharing options for: Next on the Chopping Block: Mississippi State

(sorry, this is one of the worst ones. Might stop doing these after this year.) 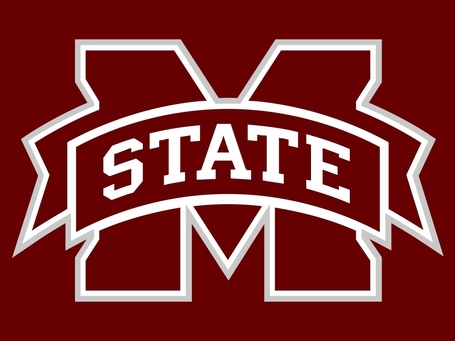 Where: Starkville, Mississippi. (Yes, Mississippi State is in Mississippi. This whole "correctly placed geographic school names" is going to take getting used to for Northwestern fans.) Starkville is a town of about 20,000 a lil bit northeast of the center of Mississippi. Teeball was invented there, hopefully by somebody with kids and not just a moving-objects-challenged adult with hopes of making it big, and Johnny Cash wrote the song "Starkville City Jail" after being arrested for public intoxication. (He said it he was arrested for picking flowers.)

Stadium: Davis Wade Stadium. Not named after Kansas City Royals reliever Wade Davis, it was built in 1914 and seats 55,082 - not really that much bigger than Ryan Field.

Mascot: The Bulldogs. We've been over this, but I'm sort of a sucker for bulldogs. I'm really a sucker for all sorts of dogs, but bulldogs are just so jowly and fat and stupid looking.

They're officially represented by a bulldog named Bully - you see... bulldog... I don't really have to explain it, do I. They were once called the Aggies - they used to be called A&M by the way - and Maroons, but made the shift officially in 1961. They've been represented by live bulldogs named Bully since 1935, but unfortunately, Bully I was hit by a bus. They're now on Bully XX, whose born name is "Champ", which is kinda misleading.

Mascot if I ran the school: I'm stickin with bulldogs, but only puppies. Once them bullies hit one, they're out the door and replaced with another newborn fat thing that has difficulty standing.

Notable Alums: John Grisham went to MSU after a THRILLING academic career spread between three schools. Machine Gun Kelly - the gangster, not the white rapper from Cleveland - briefly attended MSU before realizing he could make more money killing people and stuff than through academics.

Difference between the amount of times MSU has been to the NCAA Tournament and the amount of times Northwestern has: 10, including a Final Four trip with Erick Dampier. They went in 2008 and 2009 with Jarvis Varnado recording an unfortunate amount of blocks, and are in their first year under Rick Ray after 15 years under Rick Stansbury. Final Four aside, the most important game MSU ever played was probably the 1963 Game of Change, an NCAA regional semifinal game in East Lansing against Loyola (Chicago). Three times, state laws against playing integrated teams had prevented the Bulldogs from accepting NCAA Tournament bids, and an injunction was filed against the team to prevent them from leaving the state to play the game, but coach Babe McCarthy snuck the team out of town in the middle of the night to play a Ramblers team with four black starters.

Elsewhere in MSU sports: No natty championships so far as I can tell, but the baseball team - the Diamond Dogs - have had some decent success. Rafael Palmeiro went there before playing 40-odd years in the MLB and getting busted for 'roids.

You see, cows wear bells so they don't walk away without their herders noticing. This is related to Bulldogs football because, as the MSU traditions page states:

The most popular legend is that during a home football game between State and arch-rival Mississippi, a jersey cow wandered onto the playing field. Mississippi State soundly whipped the Rebels that Saturday, and State College students immediately adopted the cow as a good luck charm. Students are said to have continued bringing a cow to football games for a while, until the practice was eventually discontinued in favor of bringing just the cow's bell.

It also probably has some link to their historical status as an A&M school, too. For a while they used legit cowbells, but eventually a professor started making ones with handles for easier clangin. This was so annoying that fron 1974-2010, the SEC banned "artificial noisemakers", which was their way of saying CHILL OUT WITH THE COWBELLS, you know, unless Auburn was using those thingies you spin on Purim. But it was pulled back, and now they're back at it, ruining the best efforts of herders in the Starkville area to locate their lost calves.

Not exactly something to brag about: "Mississippi State is credited with being the first to use the song Who Let The Dogs Out? at a sporting event." Verily, they were the ones who let the dogs out. Between that and the whole cowbell thing, dudes really have the market cornered on "annoying as all get out".

Civil War Trollin: In May 2012, it was announced the school would host the Ulysses S. Grant Presidential Library. A) isn't it a bit late to figure that out, U-God? B) Word? Starkville, Mississippi?