A bunch of multimedia from Northwestern's first bowl win since 1949. The happy is still rolling after the Gator Bowl win over Mississippi State.

It's been under 24 hours since Northwestern won its first bowl game in 64 years, and its an understatement to say the fun still has yet to wear off. I can spend hours just cruising around the internet, eating up all the words, visuals, and sounds from Northwestern's Gator Bowl victory. Here's a look at some of it:

The highest of lights: We'd be remiss without posting the 15-minute highlight cut from the game. Watch it, then watch it again, if you haven't already.

Coachspeak: Pat Fitzgerald got to talk a lot yesterday, and you'll want to watch all of them. Here he was pregame:

And postgame, with his former teammate Sam Valensizi when his eyes sounded a little bit sweaty:

And on ESPN after the game:

And then there was the trophy ceremony. Highlights of that include a) Pat Fitzgerald giving the band the wrong tempo for the fight song and Jared Carpenter being just as confused as everybody else about why he was player of the game.

From the "great sentences" department: The AP story:

And as a reward, Fitzgerald let his players rip the monkey to shreds in the locker room.

In a .GIFfy: Hail To Purple got a little bit excited about the win, and you can tell from their front page. They also beat me to "Party Like It's 1949", which I'm none too pleased about.

Front page news: Northwestern got the big boy treatment by the Sun-Times: 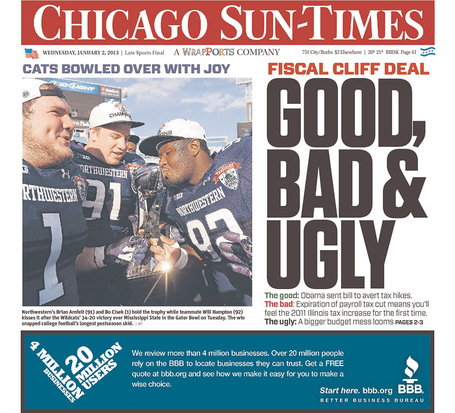 The Trib led with NIU, so they can go eat it.

Tyler Russell, too!: Northwestern was trending when the game ended yesterday: 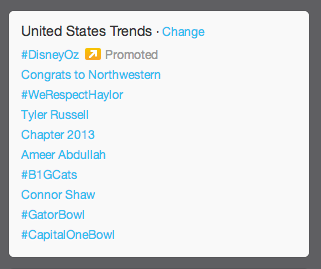 Recaps: From LTP and For Whom The Cowbell Tolls. We'll get around to it also just give us time.