Share All sharing options for: Plays of the BOWL WIN: Quentin Williams Scores

In case you missed it, Northwestern won a bowl game Tuesday. Senior safety Jared Carpenter was named the MVP of the game, which is OK, but in my book fellow senior defender Quentin Williams deserved the honor for the reasons Rodger mentioned earlier. Williams may have suffered for making his biggest play on the third play of the game. 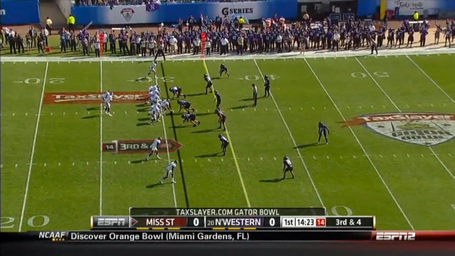 All 5 eligible receivers release at the snap. The offensive left side is where the action is, as the running back releases to the flat, the tight end stems vertical, and the receiver works inside. Northwestern, meanwhile, blitzes both outside linebackers, while David Nwabuisi sprints to the offense's left. Quentin Williams, the defensive end to that side, engages the MSU tackle before backing off into coverage. 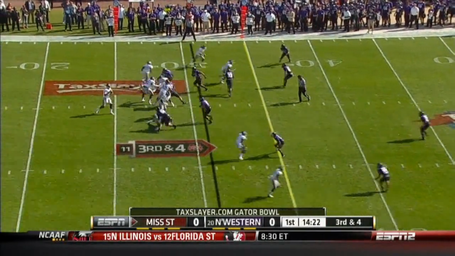 The tight end breaks outside on a corner route, while the receiver settles down inside; MSU is running a snag concept. Northwestern is in man coverage with a safety in the middle of the field, so Tyler Russell needs to let his receivers work open against the coverage. With Nwabuisi coming from the middle of the field to take the running back, the throw to the flat isn't a terrible idea if you ignore the defensive end dropping into the passing lane. 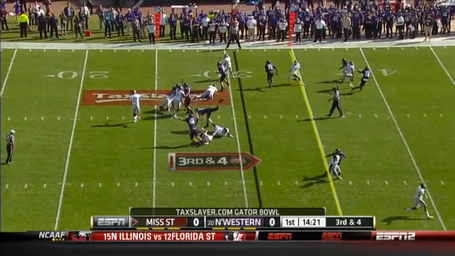 Russell does, and Quentin Williams makes him pay by catching a gently tossed ball and returning it for a touchdown. This was a bad play from Russell in several ways. He obviously missed Williams dropping into coverage, but even if Williams hadn't been there the throw took long enough to come out and was soft enough that Nwabuisi could have made a play, maybe even undercutting the throw. There was an open receiver on that side of the field, the wide receiver settling inside, but Russell completely missed that option. While the throw to the flat may have been his first read, somewhat mitigating his culpability for that particular mistake, it nevertheless emphasizes how much the quarterback forced this throw. On the positive side, Russell hustled back and nearly caught Williams on the return; this probably wouldn't have been returned for a touchdown from 5 yards further out.

Northwestern's defensive scheme was an interesting twist on cover-1 man. While NU rushed 2 linebackers and dropped a defensive lineman into coverage, they only sent 4 total pass rushers. The coverage played cover-1 with Jared Carpenter as the deep safety and Williams helping Nwabuisi by dropping into the flat; I suspect that the call drops the defensive end to the running back's side to compensate for the middle linebacker's long run from his position to cover those throws. In this case, it worked perfectly, baiting Russell into throwing an easy interception and putting Northwestern on top before the offense ever set foot on the field.