Share All sharing options for: Plays of the BOWL WIN: Inverted Veer Adventures

Almost a third of Mississippi State's 186 rushing yards in the Gator Bowl came on one play in the second quarter. Though the Northwestern defense had trouble stopping the run all game (MSU's other 29 non-sack rushes went for 150 yards, a healthy 5.2 yards per carry), no other single run came close to matching the 59 yard gain. Somewhat surprisingly, Northwestern would later stop the same play for a 5 yard loss, the biggest loss suffered by the Bulldogs in the run game. The two plays were virtually identical except for the play of the playside defensive end.

Midway through the second quarter, Northwestern was holding a 13-0 lead when Mississippi State took over on their own 37. A first down rush for 2 yards sets up a 2nd and 8 from the 39. MIssissippi State lines up in a balanced 4 receiver formation, while Northwestern shows a 3-deep shell with 6 men in the box and a defender over each slot receiver. 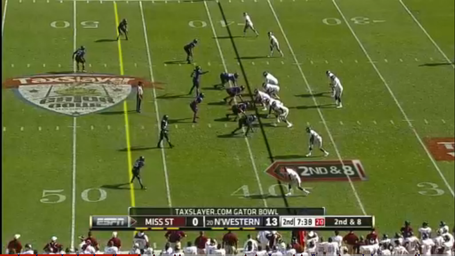 Mississippi State runs the inverted veer to the left, reading defensive end Deonte Gibson. When the play begins, Gibson stands up at the line of scrimmage and watches the mesh. 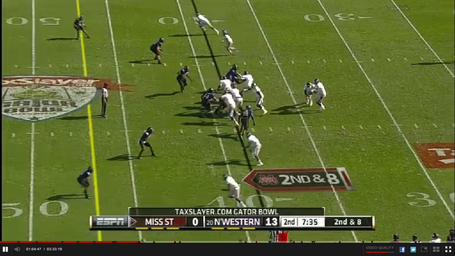 After this brief hesitation, Gibson charges the mesh point. Tyler Russell, however, has already handed the ball to running back Josh Robinson, who has two receivers set up to block the nearest Northwestern defenders. Gibson is too far inside and has too much upfield momentum to threaten Robinson. 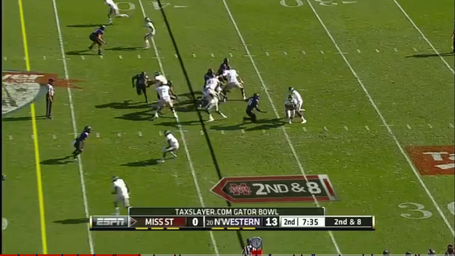 With Gibson taken out of the play by the read, MSU only needs the perimeter blocking to hold up for a big gain. It does. Ibraheim Campbell, lined up over the slot receiver, is able to play off the block and get a hand on Robinson about 10 yards downfield, but Robinson is barely inconvenienced. Jared Carpenter takes a bad angle from the deep safety position and Robinson easily avoids him. The defense keeps pursuing, eventually tracking Robinson down at the 2 for a 59 yard gain. Mississippi State would proceed to commit 2 false starts and settle for a field goal, but this play was the start of their bid to make the game competitive.

To see what went wrong, we should turn to a later play in the game. In the third quarter, Mississippi State faces a 2nd and 10 from the Northwestern 25. Once again, they come out with four receivers and the running back (LaDarius Perkins, this time) to Tyler Russel's right. Northwestern's defense is in a slightly different look, with the secondary lined up over the receivers in soft coverage and linebackers in the alley between the slot receivers and offensive tackles. 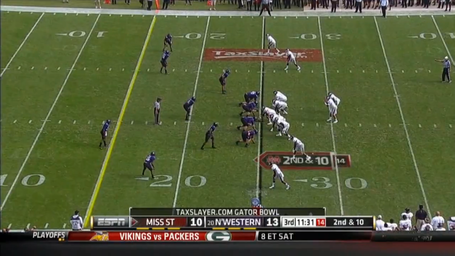 Mississippi State runs the inverted veer, reading Quentin Williams this time. Unlike Gibson, Williams doesn't hesitate, instead charging straight at the mesh point from the moment the ball is snapped. 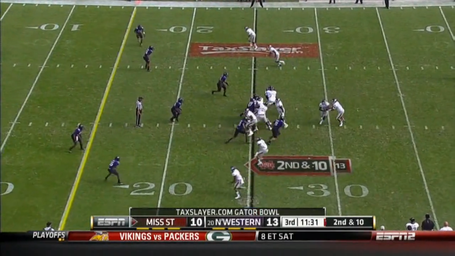 Russell hands the ball to Perkins, but Williams makes the tackle before Perkins can make a move. 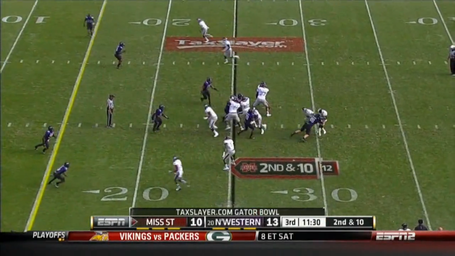 Russell would throw incomplete on 3rd and 15; though Devon Bell would tie the game with a field goal on 4th down, the second down TFL both drastically reduced the chance of MSU taking the lead and forced a somewhat more difficult field goal.

The difference between these plays was the moment that Gibson hesitated before charging the mesh. Had he recognized the play as quickly as Williams, Gibson could have, at the very least, forced Robinson to widen his path, providing time for the defense to rally to the ball. Instead, by hesitating before charging upfield, Gibson took himself completely out of the play. Williams, on the other hand, was able to disrupt the play before it even began. As far as I can tell, this was not a coaching adjustment, simply quicker recognition and better execution of the defense's plan against the inverted veer. This is the advantage experience gives; with a year under his belt, Gibson may be able to make quicker reads next year and record some TFLs of his own.

Nortwestern's run defense only allowed 2 rushes over 30 yards this year, though both of those rushes went for 50 yards. Both came off of inverted veer handoffs, one against Michigan and one against Mississippi State (oddly enough, both teams failed to take advantage of the big gains, as Fitzgerald Touissant fumbled at the end of his run and Mississippi State failed to get the ball in the endzone after Robinson's). Defensive end play was not the only problem on either play, as both included missed tackles in the open field. Furthermore, on Michigan's big run, the defensive end stepped inside to take away the QB keeper instead of charging the mesh point. Still, when one play burned an otherwise solid unit as badly as the inverted veer did this year, it is a cause for concern. Against Mississippi State, the defense showed that it has the kind of players needed to aggressively attack the mesh if they recognize the play and attack immediately. When the end fails to recognize the play, however, this gameplan allowed a massive running lane to develop on the outside.