Share All sharing options for: Northwestern-Ohio State: Scouting the Buckeyes and Wisconsin

I didn't write about Maine last week for two reasons:

On the second point, Northwestern's quarterbacks and receivers missed a few plays, and the offensive line was painfully inconsistent.  The defense did fairly well in the first half, I thought, though it could have been better in the second.

Even though Northwestern was idle on Saturday, I was riveted to the TV for one of the biggest (if not the biggest) Big Ten games of the season: Ohio State's 31-24 win over Wisconsin.  While all Big Ten fans should have been interested in the game's championship implications (OSU has to try really hard not to make the championship game), those two teams are also Northwestern's next two opponents.  I picked a couple of plays that I think give an idea of NU's upcoming challenges, one from Ohio State's offense and one from Wisconsin's.

Ohio State, though they get lumped in with teams like Northwestern as a spread offense, has a throwback philosophy of using the run to set up a vertical passing game.  Against Wisconsin, all four of their touchdowns came through the air, with three of the four coming on plays of 25 yards or more.

Ohio State started hot, forcing a three-and-out from the Wisconsin offense on the opening drive and then driving 30 yards in three plays to set up a first and ten from the Wisconsin 25.  OSU comes out in the pistol, with two receivers and a h-back left.  Wisconsin responds as you should expect Northwestern to respond, walking a linebacker out over the slot receiver and keeping all 4 defensive backs well off the line. 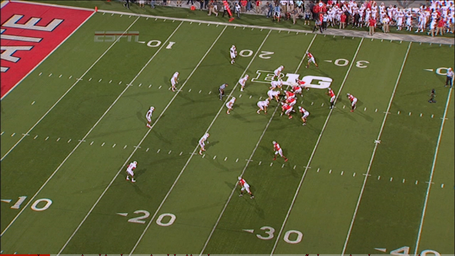 Urban Meyer wants the TD right now, so he dials up a play action pass, with a post-wheel combination from the receivers on the left as Braxton Miller's primary read.  As soon as Miller turns to fake a handoff to his running back, the Wisconsin safety in the middle of the field charges towards the line of scrimmage; while he could simply be reacting to the fake, I think his coverage responsibility is shallow, leaving the cornerbacks and other safety to handle the deep zones. 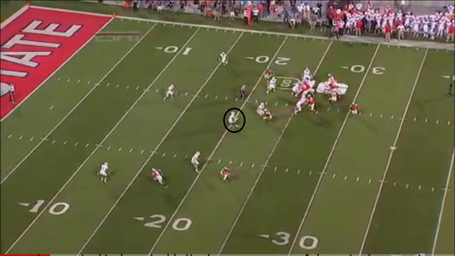 The other safety respects the run enough that he doesn't see the routes developing to his right, and OSU has the matchup they want on the outside: if the Wisconsin cornerback defends the post, he will leave the wheel open down the sideline; if he stays outside to stop the wheel, the post will be wide open. 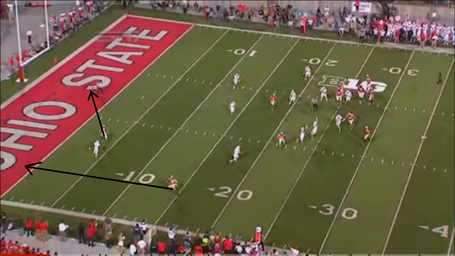 As it happens, the corner chases the post but has no chance of stopping Miller's throw. 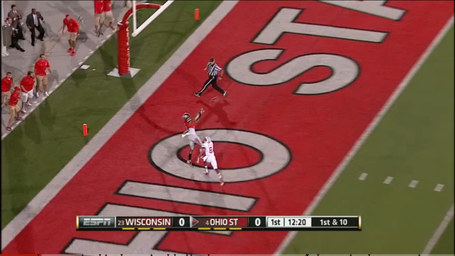 OSU's play is well designed and well called.  By placing three receivers to one side, OSU can increase the chance that the defense plays three deep coverage.  The play-action fake, meanwhile, prevents the deep safety from realizing that a receiver is threatening the deep middle.  The result is an easy 2-on-1 against a cornerback, which should end in a big gain for the offense every time.

Wisconsin also leans on their running attack, and they also use two runners.  Instead of Ohio State's quarterback-running back combination, however, both of Wisconsin's runners are running backs.  While they will simply rotate the backs, Wisconsin also likes to use a fly sweep package to get both on the field at the same time.

After giving up the touchdown, Wisconsin comes out with both Melvin Gordon and James White on the field.  Initially, they line up with a single receiver right and three receivers bunched left. 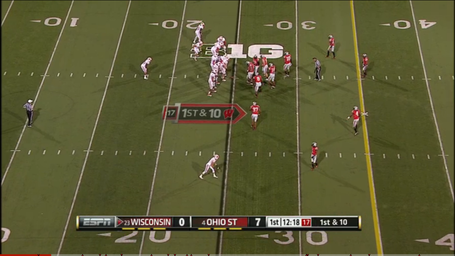 Almost immediately, Wisconsin shifts out of this formation, sending two tight ends to the right side of the formation and Melvin Gordon wide left. 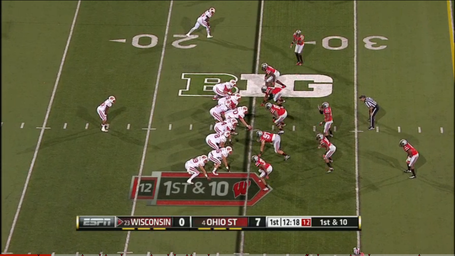 This formation strongly suggests that Wisconsin is in their fly sweep package, as they have Melvin Gordon lined up off the line of scrimmage left and have a covered a tight end (that is, a tight end ineligible to catch a pass) on the right.  This formation doesn't make much sense unless the offense plans to motion Gordon across the formation.  Ohio State puts 8 defenders in the box, anticipating a run, with the lone safety shaded well to the offense's right.  Sure enough, Gordon goes in motion and receives a handoff heading wide right. 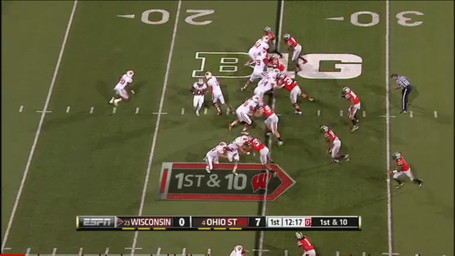 The blocking is somewhat interesting, as the offensive line appears to block inside zone to the left; this should draw in any defenders reading the line and enhance the deception when Wisconsin dials up that play off of a fake fly sweep.  The tight ends are the key blockers, as they lead the way outside.  OSU, however, has the play sniffed out.  Bradley Roby, lined up over the lone receiver, immediately attacks the play, preventing Jared Abbrederis from making any sort of block.  Meanwhile, two linebackers and the safety in the box also attack the sweep, combining with Roby to outnumber Wisconsin's 3 blockers at the point of attack. 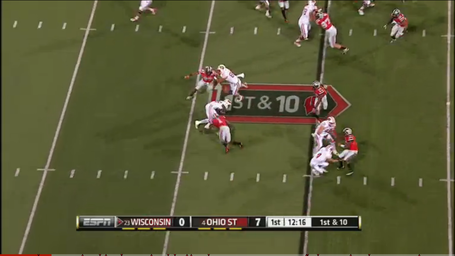 Roby comes untouched and nails Gordon for a four yard loss, but it would have taken a great play to turn this into anything positive for Wisconsin.

Wisconsin has other options from this motion, and they had some success with inside zone and play-action passes off of the fly sweep look.  These plays are important, as the formation and motion telegraph their intention and make it easy for the defense to outnumber the offense at the point of attack; if Northwestern is too aggressive about defending the sweep, those counters could lead to a long day for the defense.  Still, stopping the base play is critical; ask Nebraska what happens if you let Gordon get the edge.

At this point, I am confident that Northwestern's offense will move the ball and score some points on both of these teams.  If NU can prevent big plays, whether from Braxton Miller throwing bombs or Melvin Gordon heading around the edge, and come up with a few turnovers, a 6-0 start is possible; if not, Northwestern will enter division play with two conference losses already in the books.