Play of the Week: Down in Flames

Northwestern's first drive ended in disaster; it was one of the best drives of the day.

Share All sharing options for: Play of the Week: Down in Flames

Northwestern's defense wasn't great on Saturday, but that wasn't much of a surprise. The surprise was on the other side of the ball, with an offense that went three-and-out 8 times on 15 drives, only scoring two field goals. NU gained 20 or more yards on 5 of those drives: field goal drives of 29 and 58 yards, punts after 20 and 27 yards, and Kain Colter's interception at the end of a 26 yard drive on the first possession of the game.

After Northwestern received the opening kickoff, the offense gained 26 yards on only 3 plays, setting up a first down at the Wisconsin 49. NU comes out in a three receiver formation, with Dan Vitale at h-back and Venric Mark in the backfield. 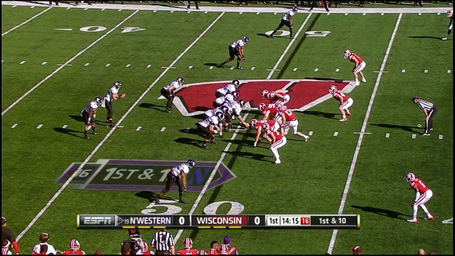 Wisconsin crowds the line with seven defenders, anticipating a run. NU is ready to take advantage, faking a handoff to Mark and setting up for a play-action pass. Wisconsin runs a zone blitz, rushing 5 and dropping into a 3-deep, 3-under zone coverage. 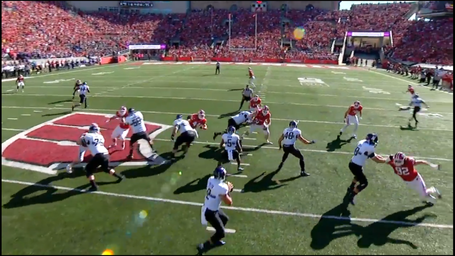 The interior protection isn't very good, as both Brandon Vitabile and Ian Park get beat. Still, Venric Mark and Dan Vitale are in position to help out on those blocks. More importantly, Christian Jones is coming open in the middle of the field, where Colter seems to be looking. 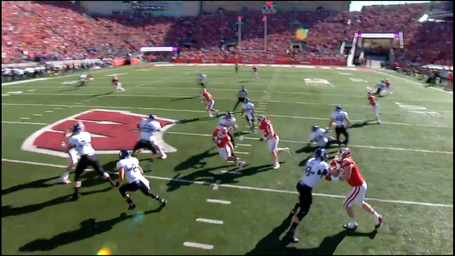 Instead of helping the line, Mark and Vitale leak out into the pattern; they are probably responsible for the linebackers who have dropped into coverage. Colter sees two pass rushers breaking through and takes off to his left instead of hanging in and trying to deliver the throw to Jones in the middle of the field. Wisconsin rallies to the ball quickly, penning Colter in against the sideline and forcing him to throw the ball away. 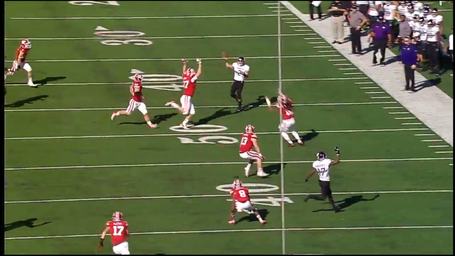 Instead of throwing out of bounds or trying to hit Rashad Lawrence at the sideline, Colter decides to try to hit Christian Jones in the middle of the field. This goes poorly, as Colter takes long enough to set his feet and get off a bad throw that Wisconsin's defenders are able to converge on the ball; Sojour Shelton is the lucky winner, coming down with the interception, but Tanner McEvoy also would have had a better shot at the throw than Jones.

There are a lot of problems here, obviously. The worst part is that they all come down to execution: two blown blocks, a missed receiver by Colter, and then the disastrous decision to throw across his body instead of out of bounds or down the sideline for Lawrence. The receivers execute their assignments, which is something, I guess.

I'm reasonably confident that Northwestern's quarterbacks will usually play better than they did against Wisconsin. I am less confident about the offensive line, which has been subpar in pass protection for the last four games. Northwestern usually tries to keep in as few blockers as possible, releasing backs on plays like this; if the line can't hold up better, that approach may need to change.

Northwestern-Wisconsin: No. 19 Wildcats looking for bounceback