GET YOUR TERMINOLOGY STRAIGHT, JERKS.

Share All sharing options for: Northwestern-Minnesota: 5 reasons to hate the Golden Gophers

Northwestern plays Minnesota tomorrow! It's been a busy week for me, mainly due to trying to find an apartment but also due to work, which explains the lack of stuff. Also we're trying to reconcile "Northwestern just getting the crap beaten out of them" with "Northwestern being 10-point favorites" in our head.

We don't really hate Minnesota, in part because the last few years have been rather one-sided. The series history still favors Minnesota by a lot because of Bronko Nagurski and whatnot, but the Wildcats have won five of 6 and 10 out of 15. I think my main sporting gripe with the Gophers stems from a 2012 overtime Big Ten Tournament loss, which sucked prohibitively.

But it's hard to hate gophers, you know? I would make a Caddyshack joke but I'm pretty sure these people are tired of that. Since I have no qualm with lakes, I've drummed up a few Friday morning reasons to hate. 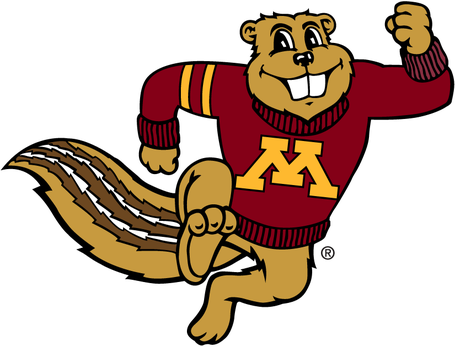 He's adorable! Look at how smiley and excited he is in that sweater! Oh, man, furry animals in sweaters! Awwww! I've spent five years trying to get over how damn cute Minnesota's mascot is. He's so cute.

However, he is distinctly not a gopher. This is a gopher: 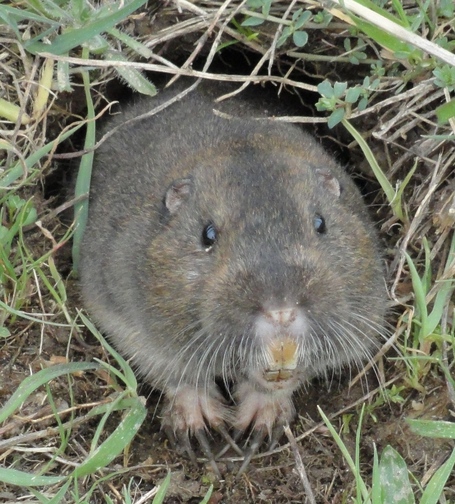 Gophers comprise the Geomidae family, although some ground squirrels are erroneously called gophers as well. Gophers are squat creatures whose lifestyle consists of burrowing and storing food in their cheek pouches to bring back to their burrows and hoard. They have become known as pests because they have a tendency to screw up humans' lawns in their burrowing process. They would not make a good mascot, because quite frankly, they're not very cute.

However, Minnesota is known as the Gopher State. This is not because of a preponderance of gophers in Minnesota. Gophers are generally found in the Southwest. It's because of a cartoon from the 1850's mocking a railroad appropriations bill that depicted gophers driving a train, andit was not intended to be a compliment. But the nickname stuck and the derogatory meaning fell away.

So when time came about to find a mascot for the University of Minnesota, the gopher was the go-to choice. However, whoever was charged with actually drawing said gopher did not choose to draw a gopher. They drew a 13-lined ground squirrel: 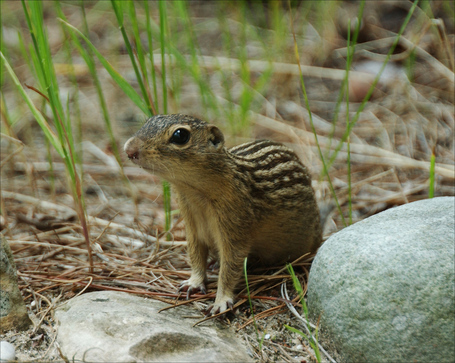 The state of Minnesota sacrificed accuracy for the sake of cuteness. It seems harmless, but it's obvious Minnesota doesn't want you to know the truth about gophers. Burrowing, snivelling gopher.s

(Let's not even get into the "golden" aspect of said gophers. Gilding animals is something we should tell PETA about.

Ever wonder what Ski-U-Mah means? I mean, obviously it means nothing, but no, it really means nothing. Take it away, Wiki.

U of M Rugby captain John Adams who coined the phrase in 1884, had heard Sioux boys yell "ski-yoo!" when they won canoe races on Lake Pepin. He took that as the Sioux word for victory, or exultation. A co-captain added the "mah" to make it rhyme with "rah" and created "Ski-U-Mah!"

I'm sure that rugby player was super-accurate in his anecdotal, virtually contextless diagnosis of a language he didn't understand.

Dakota-Lakota specialists state that the word "Ski-U" or "Ski-yoo" or "Ski-oo" are not Sioux victory cries or the Sioux word for winning and that what the boys heard that day "Ski-yoo" may have just been a nonverbal exclamation, the way we now yell "Whoo-hoo!" when we have reason to celebrate something. Other possibilities that they may have heard that day are:

This is how two-thirds of America was named. By having brief, meaningless interactions with Native Americans and then assuming the word they were using for "hello" was their way of naming the place they were standing in, and then being like "That's a great name! We'll use it now that we own it!"

One of the fun things about the Big Ten is how many rivalry trophies are. It's fun when, at the end of the year, Northwestern gets to take Illinois' hat from them, even if it's a new hat meant to replace a tomahawk.

However, Minnesota goes kind of overkill on this. Several teams have three rivalry trophies, but only Minnesota has four: The Floyd of Rosedale with Iowa, the Little Brown Jug with Michigan, the Paul Bunyan's Axe with Wisconsin, and the Governor's Victory Bell with Penn State.

These are of varying levels of awesomeness. Floyd is awesome because it's a damn pig, there's tons of border hate, and it's a relatively even series. Since the trophy was put into play, Minnesota is 41-36-2.

The Paul Bunyan's Axe is pretty cool because it's Paul Bunyan's Axe, and it's the oldest rivalry in college football, dating back to 1890, although they wouldn't play for the axe until 1948. But now Wisconsin kinda owns the series, winning every year since 2004.

The Little Brown Jug has history, but it's kind of silly playing for a trophy if Michigan wins every year. The Gophers have only gotten to take home the jug three times since 1968

Having a rivalry with Penn State is just the silliest. When the Lions entered the conference in 1993, it was invented to make Penn State seem at home, or something, a feat which could somehow be accomplished via a trophy game with a school damn near halfway across the country. Penn State owns the series, 9-4, and considering the new division setup, these two teams will play just about never. So, what's the purpose?

Of those teams above, how many would name Minnesota as their top rival? Iowa, maybe? I think it's more fun to have one real rival (which Northwestern wishes it does) than to have four schools you're supposed to care about.

Paying more attention to hockey than to us

LOOK AT HOW MANY POSTS THE DAILY GOPHER HAS ABOUT THE HOCKEY TEAM THAN THEY DO ABOUT NORTHWESTERN.

I like hockey, y'all. I didn't grow up on it, but watching the Rangers and Blackhawks the past few years has been really fun. I wish Northwestern had a hockey team, somewhere around No. 13 on the list of things I wish were different about Northwestern sports.

But, YO, we're playing you! In football! On a football field! And y'all are getting pumped about beating New Hampshire?