Plays of the Week: Identity Crisis

Share All sharing options for: Plays of the Week: Identity Crisis

Northwestern needed more from the offense on Saturday; while the defense wasn't perfect, 10 of Minnesota's points came from an interception returned for a touchdown and a 6 yard field goal drive. The offense, on the other hand, had trouble finding something to hang its hat on.

Following Minnesota's first half touchdown drive, Northwestern starts the drive with three receivers bunched to the right and a lone receiver left. Minnesota plays tight coverage on the outside and puts six defenders in the box, leaving a single safety deep in the middle of the field. 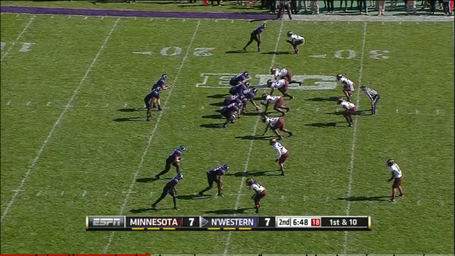 With Colter in the game, a defensive look like this would be a green light to run the ball: the defenders over the receivers are closely watching their offensive counterparts, and between the 5 offensive linemen and Colter reading a sixth defender NU has the numbers to deal with Minnesota's run defenders. With Siemian in the game, however, this should usually be a pass, and that's the route Northwestern goes on this play. 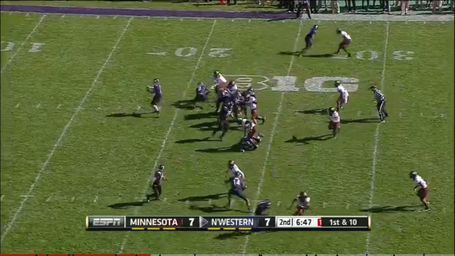 What doesn't make sense is the type of pass. Dan Vitale flares out to the flat, while Christian Jones sets up to block the inside defender on the line and the outside receiver (Rashad Lawrence, I think) takes the other defender deep. This is a bubble screen, which is a great option if the defense is cheating players inside to take away the run and not a very good option if the defense has 3 players within 7 yards of the three receivers. To make matters worse, the defender lined up over Jones immediately reads the play and charges into the backfield, interfering with the throwing lane. 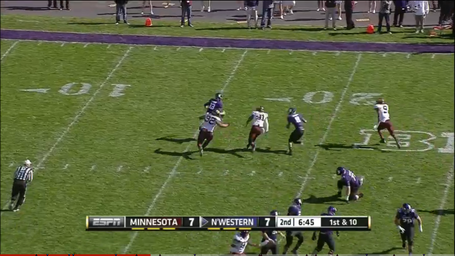 Instead of risking a forced throw, Siemian rolls to his left and throws the ball away.

This play doesn't make much sense to me. The offensive line and running back (Stephen Buckley) are pass blocking the whole way, so this isn't a run with a packaged bubble screen on the outside. The receiver going deep on the right might be intended to slip past defenders playing the screen; if that is the case, Minnesota's man coverage kills that plan before it starts. On the backside, Tony Jones blocks instead of running a route, suggesting that this really is a bubble screen all the way. Whatever the case, Minnesota was in position to deal with the play before the snap; Northwestern can't afford to waste downs on plays that have little chance of working.

Later in the same drive, Northwestern comes out in the pistol, with Malin Jones to Siemian's left and Stephen Buckley as the tailback. Minnesota lines up in a 4-3 defense, with one outside linebacker outside the defensive end to better deal with the two receiver side of the formation. 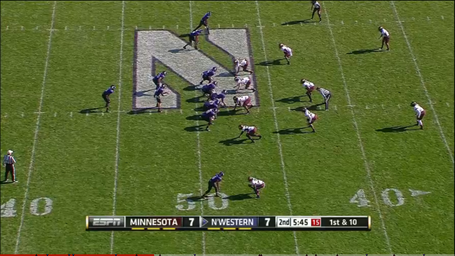 Northwestern runs speed option left, letting Siemian read the defensive end on that side while the rest of the team blocks outside zone. Siemian gets a clear pitch read from the defensive end, and the blocking sets up nicely: Jack Konopka releases at middle linebacker Damien Wilson, Christian Jones has a great angle on James Manuel, and Malin Jones should be free to work his way up to the safety, opening up a big play for Buckley. 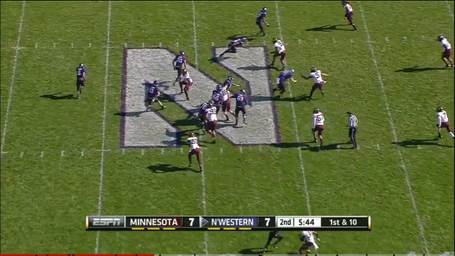 Except for the detail that both Konopka and Christian Jones completely whiff on their blocks. Instead of Malin Jones going safety hunting, he is forced to block Manuel at the line of scrimmage. 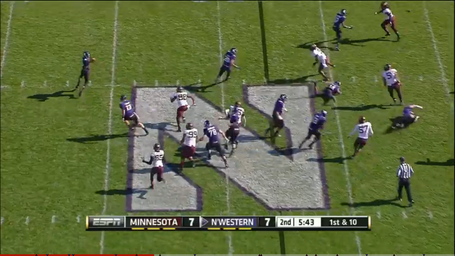 This leaves Wilson free to make the tackle for no gain. 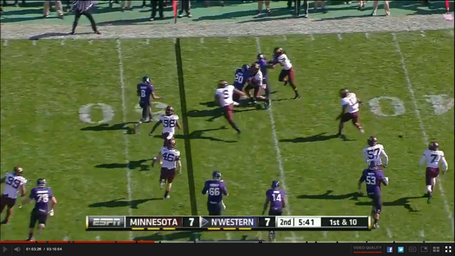 I have seen complaints about using Siemian on the option, but this play shows why I think they are unfounded. Siemian did his job, taking the defensive end out of the play on the pitch. Had the end widened to take Buckley, Siemian has plenty of speed to pick up 4 or 5 yards on the play, a perfectly acceptable first down run. The problem with the play wasn't the quarterback but the players who missed the two most important blocks on the play. If either Konopka or Christian Jones makes a block, Malin Jones should be able to pick up the other linebacker and let Buckley take the safety one-on-one a couple of yards down the field. If both make their blocks, Buckley should get an easy 10 yards with a chance at more. When neither makes a block, however, the defense has no problem stopping the play.

Northwestern has struggled in the absence of Kain Colter and Venric Mark, and part of the problem is that the offense is missing players that give a clear identity as a run-first, option-heavy attack. The bigger problem, however, is the ongoing struggle to execute. Players like Colter and Mark can make a lot of tacklers miss, but no running back or quarterback can completely eliminate the need to block well at the point of attack; as long as Northwestern can't reliably make blocks, the offense won't reliably move the ball.