Considering the epic dropoff since, Northwestern-Ohio State actually was the biggest game in recent Northwestern history. Let's think about how we got there -- and how we can get there again.

Share All sharing options for: The Slings and Arrows of Outrageous Fumbles: Northwestern's high water mark

Above is Cameron Dickerson's touchdown, a score that put then-undefeated Northwestern up 30-27 against No. 4 Ohio State.

I don't remember that instant, per se. I remember the feeling of being up in the game Northwestern had waited eons for, but not the nitty-gritty of that moment. Like most of my college and subsequent postgrad college football watching experiences, it's a blurry, happy, drunk splotch, a scattershot streak across football fandom's Pollock.

Even the characters in the play seem to be operating in a drunken haze. Trevor Siemian, noted immobile QB, is Feats of Strength Drunk Guy, attempting to do something he should not -- running towards the line of scrimmage like he could pick up a third-and-12, then throwing on the move, which he has never ever ever ever done in his entire life -- and succeeding. Dickerson catches the ball and promptly stumbles out of the end zone, but goes back in out of unnecessary instinct, as if the TD would be negated by staying out too long but nobody would notice if he went back in. He's greeted by Christian Jones, and they gleefully traipse groundwards, reminding me of the things I remember about trying to give my 6'3 friend a piggyback ride home walking to the el from McGee's. (I mainly remember the falling and laughing and the next day finding enormous scrapes on my knees and palms.)

In that moment, I was chugging, both literally and figuratively, instead of sipping, as my site's name suggests. And when you do that, you miss the details, both of the finer qualities of the hooch and your surroundings. I wish I'd noted those details, because in retrospect, I wonder if that moment might have been the best Northwestern football will ever be.

When the Civil War ended, America was overloaded with a new, unfortunate commodity: dozens of enormous fields where thousands upon thousands of men had died. These blood-soaked plots looked bucolic without reminders that something brave, yet horrible had happened there, so instead of allowing the battlegrounds to return to being farms or whatever, hundreds of monuments were set aside to memorialize the dead.

There's a particularly interesting one by a copse of trees in southern Pennsylvania. It represents "the High Water Mark of the Rebellion." 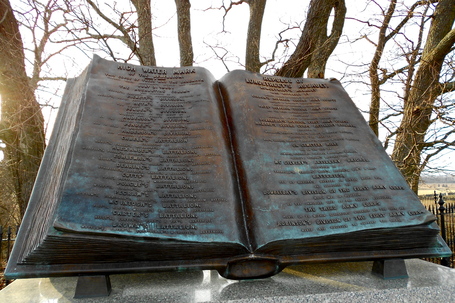 General Lee's Confederate army had come to Pennsylvania in hopes of bringing the war to the North. After spending much of the war defending their home turf, the hope was to to engage the Union Army on the terms they wanted. They got their battle: the two sides met at Gettysburg with the northern forces fortifying defensive positions in between the Confederates and important cities to the South and East. The battle quickly became one of the most ferociously fought of the war as the men in grey tried to dislodge the northerners. After failing for two days, Lee ordered a grand charge was ordered on the third, with the Confederates sprinting towards the enemy lines in hopes of breaching the center of the Union line. Their target was the copse of trees pictured above

Charges worked in a time when everybody had swords. The Union army, however, had guns. The mass of yelling Southerners was asked to run about three-quarters of a mile in plain sight of those guns, and many men were mowed down. Some of them stayed on their feet long enough to reach a location close to that copse of trees.

If the Confederates had broken through, the war would have changed drastically. They would have been able to wreak havoc on the defenseless Union positions and, having significantly weakened their opposition, forced the North into pushing for peace. The war might have ended, and the new nation might have been able to continue existing.

That did not happen. Pickett's Charge, named for the unfortunate man selected to lead it, was repulsed, violently and with large loss of life. The Confederates quickly left Gettysburg and headed back for Virginia. Their campaign into the North was over, and Lee's troops would spend the next 20 or so months staving off defeat before relenting, never having threatened again.

That spot the Confederates reached was the closest they got to winning. Hence, the term "High Water Mark," the furthest reach stained by rising floodwaters before they eventually subsided.

Northwestern's 2013 has been a black-and-white cookie, with Dickerson's catch the thin line between heaven and here. Up until that moment against Ohio State, everything went pretty damn near perfect. There were chinks, sure, like poor run defense, even against bad teams. But 4-0, and the No. 4 team in the country on the ropes.

Since then? NU blew the lead to Ohio State -- obvi -- and followed that up with a blowout loss to Wisconsin and losses to Minnesota and Iowa teams against whom NU had been double-digit favorites in August. It looks like a ticker tape of a stock market crash.

How does that happen? What was Northwestern's ipecac that made everything so right go so wrong so suddenly?

Lots of people have answers. The sports columnist says the team is demoralized after losing the big game. The pessimist says the team was overrated and we never should have bought the hype. The optimist is snorting Valium and telling everybody Chris Collins is going to turn this basketball program around.

To me, one thing that stands out prominently while scanning the box scores, and even more prominently when thinking about the games themselves. Against Minnesota, NU had three turnovers, one pick-six and one fumble that gave Minnesota a field goal, 10 points in a game NU lost by three. Against Iowa, Northwestern's offense actually looked pretty good when you look at the stats, but two of their best drives were killed by Mike Trumpy fumbles (one is credited to Kain Colter's pitch, but, well, it hit him in the hands.) Both could have led to NU points, instead, the Wildcats lost in overtime.

But in a game that's primarily chaos, they're superchaos. Fumble! Let's arbitrarily bounce an ball with a completely unpredictable bouncing pattern on the ground with no warning and see which fat dude jumps on it! Interception! Now all the guys who never tackle have to tackle the guys who never have to run with the football.

In 2012, Northwestern rode the turnover train, outchaosing its opponents 29-15. Several games swung on key turnovers and ended up as NU wins instead of losses. As fans, we were 80's stockbrokers, and wait how did all this cocaine get here and let's snort it all and BUY BUY BUY BUY BUY. Then, our earnings came in and we bought MORE COCAINE and more stocks, too.

2013 started off the same way. Two pick-sixes against Cal! Four picks against Syracuse! Two more pick-sixes against Maine! We stopped having to call our coke dealer: he just showed up Tuesdays, Thursdays and Saturdays and the stock kept going up.

But you shouldn't build your castles on quicksand, and you shouldn't make investments because you're strung out. Turnovers don't explain the loss to Ohio State -- maybe that blocked punt does -- and they don't explain a blowout loss to Wisconsin. But they made the team at its best seem better than it was, and right now, they're making the team at its worst seem like its much, much worse than it is.

With 150 years of retrospective, we can see the Civil War for what it was: a few insanely wealthy potentates driving an entire nation into armed conflict for the sake of preserving an inhumane, morally corrupt economic system to keep themselves insanely wealthy. But in postbellum America, that would have been a bad thing to point out.

Normally the winners write the history, but in this situation, the winners had to awkwardly segue from trying to destroy their enemy to trying to inhabit the same country with their enemy peacefully. Gloating would have been politically unwise.

So when America built its monuments, they didn't always hail the victors valiant, but rather focused on the brave deeds of both sides. That's the lens through which the High Water monument was built. It doesn't comment on the motives of the South. It doesn't mock them for their failure. It takes the spot where they suffered their gravest defeat -- the one that, more than any other spot, doomed them to defeat -- and makes it a monument to their attempt at victory. It's an epitaph for Icarus that praises him for getting really damn close to the Sun.

In this case, we're the ones who get to write the history.

If we want, this season can be a perfect Wile E. Coyote cartoon. We were chasing that Road Runner, we almost had him, suddenly, he was gone, we were looking down, and the ground wasn't there, and we had but a split second to hold up our sarcastic sign before plummeting. We were great, and now we're falling into an endless abyss. We were so great and nothing came of it. We were choke artists.

If that's the case, you have your high water mark. It's preserved as a monument. This one's on YouTube.

I will savor that moment crafted for us by randomness, even if we weren't good enough to deserve it at the time. That was really cool! We should also be furious that those slings and arrows gave us profound disillusionment when we realized we couldn't touch something we thought was there, and also giving dumb people a few trillion more arguments about why Northwestern will be good at sports.

But I'd also like to start thinking about Northwestern sports rationally again. We want to be better than this. That requires building, not leaps, and Pat Fitzgerald seems to be building. Our expectations of success were bumped up by the slings and arrows of outrageous fumbles. Let's let them return to where they should have been before because although we might one day eclipse our high water mark, it probably won't be this year, or next year, or maybe the year after that.

Chugging was fun. That party last night was awfully crazy, and luckily, somebody taped it, and now we can watch it if we feel like.

But for now, it's time to get back to sipping.