Plays of the Week: Ham Vitale

Northwestern's superback was a bright spot on offense against Iowa

Share All sharing options for: Plays of the Week: Ham Vitale

I could write an article about what went wrong on Saturday, but I think one stat sums it up: Northwestern had 8 offensive possessions in regulation (excluding the game-ending kneeldowns) and turned the ball over two times. The other 6 only produced 10 points, which still isn't good, but I like NU's chances of finding a few more points if they don't put the ball on the ground.

So instead of talking about the bad, I want to focus on a few things that went right. Many of those plays came from one man: sophomore superback Dan Vitale.

For our first play, we go to the third quarter. Northwestern faces second and 8 from the Iowa 10, and the offense comes out with trips right and Mike Trumpy in the backfield. Iowa responds with what looks like a man-to-man look on the outside, with the other 7 defenders looking into the backfield. 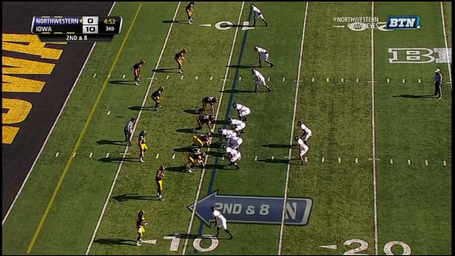 Northwestern calls a play-action pass, running Dan Vitale down the middle from the inside of the trips side while the other two receivers run a smash concept. 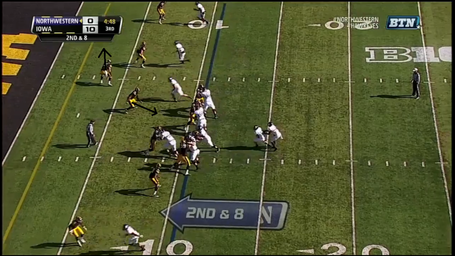 I don't know what coverage Iowa was trying to run, but it doesn't work out. Tanner Miller, lined up over Vitale at the snap, immediately turns outside, covering the corner route from the inside out. The only other defender close to Vitale is Anthony Hitchens, who steps toward the run fake. This leaves Vitale wide open in the end zone. 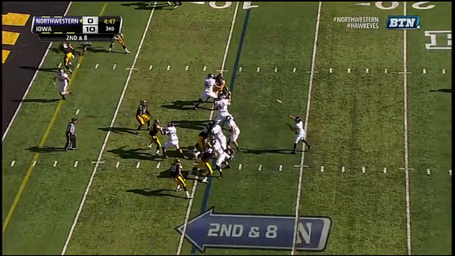 Obviously, the play-action fake was extremely effective, sucking all three linebackers up towards the line. Even considering that, though, Iowa's coverage doesn't make much sense to me. Iowa's three defenders to the offensive right play a zone coverage, with Miller apparently responsible for the deep half to that side. On the other side, Iowa plays straight man coverage against the lone receiver. This puts Iowa's linebackers in conflict on play-action: they are responsible both for handling any middle pass routes and for plugging holes against the run. This might be how they drew it up, in which case this is a nice job by Mick McCall exploiting the tendency, or Iowa might have had some communication problems and ended up with part of the defense in one coverage and part in another.

Play action is a traditional way of getting tight ends open, as the position's combination of run-blocking and pass-catching puts a corresponding dual stress on the defense. Northwestern exploited that stress earlier on the same drive, getting Vitale open for a 31 yard gain.

On the second down following a Kain Colter rush for 3 yards, Northwestern comes out with trips left and Vitale lined up as a tight end on the right. This is the same formation as the first play of the drive, and Iowa responds with a defense heavily shifted towards the trips side. 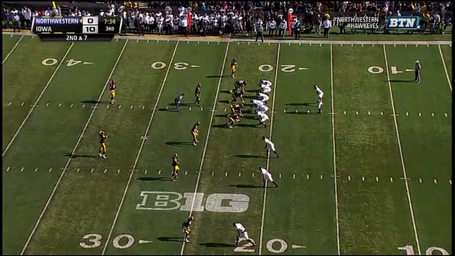 At the snap, Colter fakes a handoff and Vitale opens his body outside before heading towards the cornerback on his side, BJ Lowery. 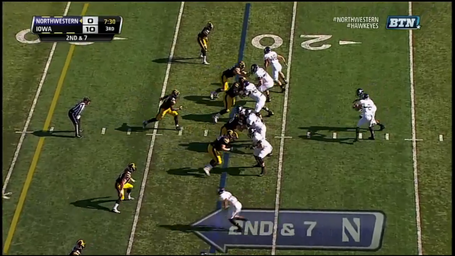 Compare Vitale on the previous play, where he is responsible for blocking Lowery. 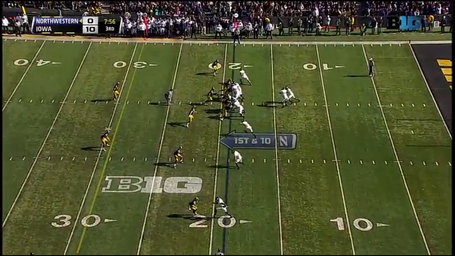 In both cases, Vitale begins by dropping his outside foot before heading for Lowery's inside shoulder. His job on the run is to seal the corner outside, opening the outside for Colter if he keeps the ball. On the pass, his job is to sell the run before accelerating downfield. 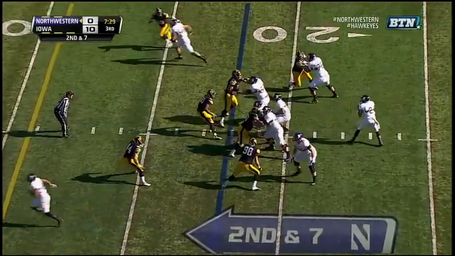 Lowery catches on quickly, and Vitale has to try to run by him. 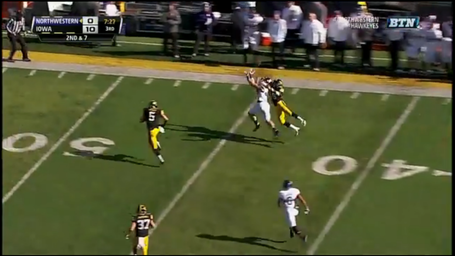 Vitale just manages to get behind Lowery, and Colter's throw is just beyond Lowery's swipe. Vitale bobbles the ball once and hauls in the reception.

Vitale might by himself a step with his release, but for the most part he simply beats a cornerback by running straight downfield. The separation may not be great, but he gets the job done.

Mick McCall likes this formation with trips away from a tight end, and Vitale makes it a matchup nightmare for the offense. Iowa matches up to the three receiver side by moving linebackers outside, which both weakens their run defense inside and leaves those linebackers vulnerable to pass routes from the receivers. On the other side, Iowa's cornerback has to play an important role against the run, which isn't ideal. With a tight end who can also beat that cornerback deep, the offense has a lot of options.

After the game, Fitz made some comments about the staff's goal of getting Vitale more involved against Iowa. While using your best players always makes sense, Venric Mark's absence makes Vitale particularly important as one of the few Northwestern players who can consistently beat defenders one on one. Hopefully Vitale can have another big finish this year and help Northwestern to a strong finish.