Play of the Week: A Buckeye Blocks a Punt

Share All sharing options for: Play of the Week: A Buckeye Blocks a Punt

Northwestern played a good game on Saturday, but a few big mistakes handed OSU the game. One came on a late interception, when Trevor Siemian forced the ball to a well-covered out route. The first major mistake, however, came on a punt in the first quarter

With Northwestern leading 7-3, Ohio State had pinned the Cats inside their own 1 yard line with a punt. A conservative three plays (run, run, Colter scramble) later, NU faces fourth down. OSU puts 8 players in position to rush Brandon Williams, one more than Northwestern's 7 blockers can handle. 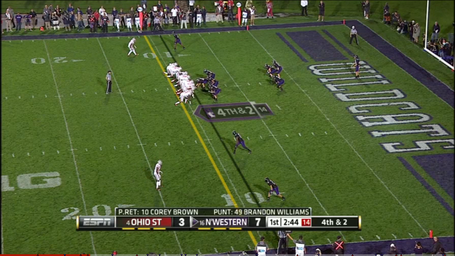 At the snap, however, one of the OSU rushers backs off to set up the return; the situation is now 7-on-7, and Williams should be able to get off the punt. 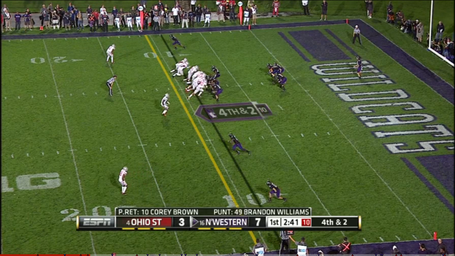 OSU is attempting to overload the right side of the protection, but the three rear protectors should be able to adjust to the rush. 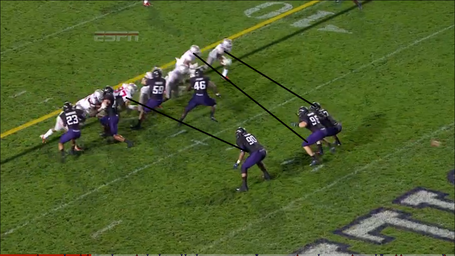 Two things go badly wrong at this point. First, long snapper Pat Hickey is bowled over without even slowing down his man; This gives OSU a 4-on-3 against the second line. Second, C.J. Robbins and Max Chapman double team the leftmost OSU rusher. This leaves Tyler Scott all alone against three rushers. 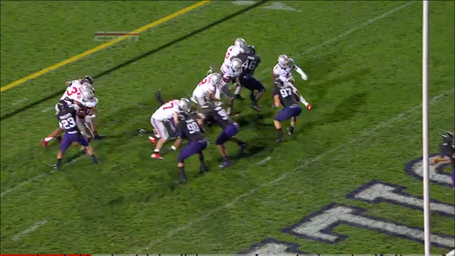 Scott picks off one of the rushers, but the other two have no problem getting to Williams before the ball leaves his foot. 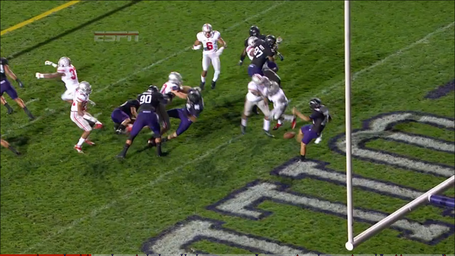 There were three main failures on this play.

1. NU should have brought another blocker in tight presnap to even the numbers; even though the eighth man bailed, this might have allowed NU to better slow the initial surge.

2. Hickey must do better on his block. Long snappers have a tough job, as they must accurately throw the ball 15 yards backwards and immediately be ready to stop a rusher; this isn't an excuse for getting blown up, though.

3. The second line must adjust to the rush. OSU overloaded a side of the formation, but having 3 players back should let the blockers see the rush develop and react. Instead, NU ended up with a double team and two unblocked rushers.

Ohio State used a nice rush scheme on this play, and their ability to put elite athletes on the punt block team helped them overwhelm NU's long snapper. Still, it was primarily a breakdown by Nortwestern's punt team. I expect that Pat Fitzgerald has gone over this play many times, trying to figure out whether NU has better options when faced with an opponent looking for a punt block. I don't think radical changes are in order (NU hasn't had a punt blocked since 2008, if I am reading cfbstats.com correctly), but you can bet that special teams coordinators around the conference are licking their chops at the thought of repeating Ohio State's success.