Plays of the Week: Fourth and Game

Share All sharing options for: Plays of the Week: Fourth and Game

After taking over at their own 22, Michigan followed a first down completion with a pair of incompletions, setting up a fourth and four from their own 26. Michigan compresses the formation, putting a pair of receivers tight to either side, while Northwestern drops three safeties deep to prevent a big play. 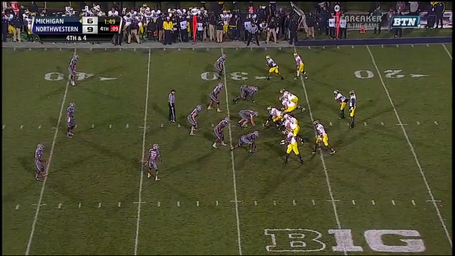 Northwestern goes with a three man rush, and Deonte Gibson gets around Taylor Lewan. It looks like Devin Gardner has an easy throw in the left flat, but he never looks that way. 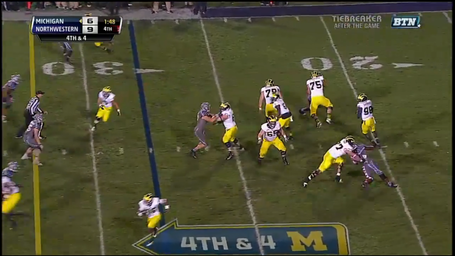 The rush flushes Gardner to his right, where Chi Chi Ariguzo comes down from coverage and Ifeadi Odenigbo releases from his pass rush. Ariguzo takes an inside angle, which causes all three players to collide and interferes with Odenigbo's pursuit. 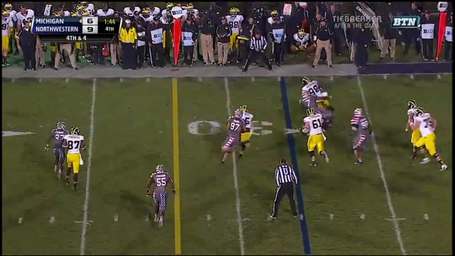 The collision frees Gardner, who makes it too the first down marker. 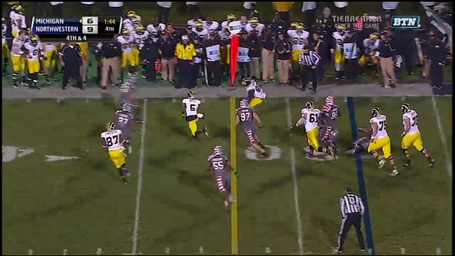 Gibson's rush on this play is exceptional; while Lewan gets enough control to prevent Gibson from finishing the play, he does well enough against a NFL-bound tackle to force Gardner out of the pocket. If you can get a rush like that, the three man rush looks pretty good. It does, however, weaken the middle contain from the defensive line, as Tyler Scott is responsible for all four gaps between the tackles. On a third hand, flooding the zones limits Gardner's quick options and puts Ariguzo in a good position to rally to the scramble. The play comes down to the pursuit angle: if Ariguzo plays a bit wider, the drive ends on this play.

On the ensuing series, Michigan got to fourth and four by means of a six yard pass on second down. The Wolverines stack three receivers to the right, and Northwestern responds by showing pressure. 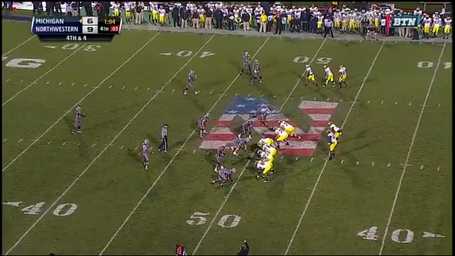 Northwestern sends six pass rushers, leaving the three defenders over the stack alone outside. Michigan gets the rush sorted out, giving Gardner a clean pocket. 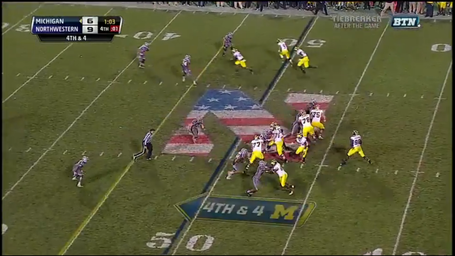 Michigan runs a stick concept with the stack, with the front receiver heading deep while the other two run an out and a short curl. Northwestern's coverage is confused: Ibraheim Campbell carries the front receiver deep, double teaming him, while nobody picks up Devin Funchess on the curl, leaving him wide open for the conversion. 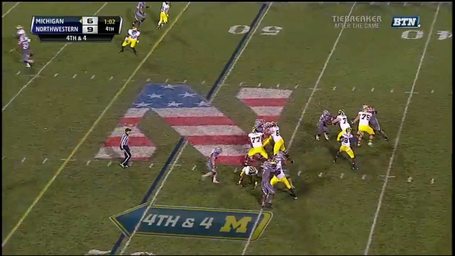 Presumably, Northwestern was in man-to-man coverage, to which the stacked receivers are an ideal counter. Because the receivers' releases overlap, the defenders must pick them up after they get into their routes, and the defense must find their assignments on the fly. The usual way to deal with this is to have rules that assign defenders to receivers based on where the receivers break their routes; obviously, Northwestern fails to execute those assignments. Without knowing the rules, though, I can't say what exactly broke down.

Before this drive, Northwestern hadn't allowed a third or fourth down conversion in the game, which makes the breakdowns even more frustrating. Schematically, the first play worked well, putting two defenders in position to make a stop; missed tackles are a glaring problem in execution, though. The coverage matchup on the second play isn't ideal, as the stack is a strong way to attack man coverage. On the other hand, I doubt that the play was drawn up to leave one of those receivers wide open, so the execution wasn't ideal.