Play of the Week: Rundown

MSU's winning touchdown under the microscope

Share All sharing options for: Play of the Week: Rundown

To be clear at the outset, Northwestern's offense has been the main problem in the last few weeks; against Ohio State and Wisconsin, the defense forced turnovers and kept explosive offenses from playing their best game, while Minnesota, Iowa, Nebraska, and Michigan all struggled to move the ball with any consistency. Still, offensive struggles have received plenty of attention, and I plan to look at the problems on that side of the ball in more detail in the offseason. So the offense's struggles against MSU weren't exactly surprising; what was surprising was the defense breaking down against a questionable Spartan offense.

On their first touchdown play, Michigan State comes out in an I-formation on third and 5; Northwestern puts 8 in the box, with Traveon Henry in the deep middle of the field. Though the defensive formation is set to play the run, Northwestern is in a nickel package, with Jimmy Hall on the field instead of a third linebacker; I saw Hall much more than expected in this game. Before the snap, MSU motions the flanker from left to right, drawing the cornerback with him. 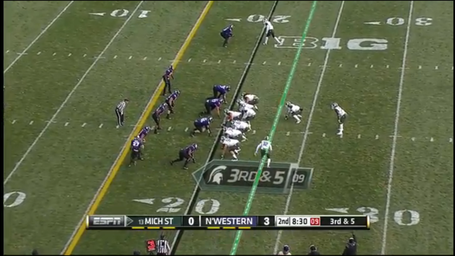 At the snap, Michigan State sends the fullback to the right; combined with the receiver in motion, this draws the Northwestern linebackers to the right, while the offensive line sets up a run left. The left tackle and right guard block down to the defensive tackles while the right tackle, center, and left guard all pull left to lead on the run. 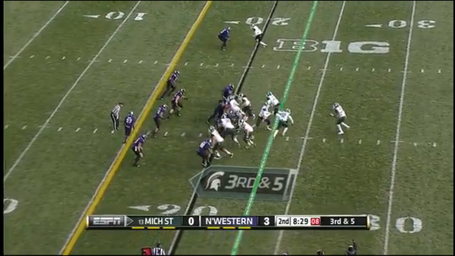 The blocks are, to say the least, well executed. Deonte Gibson, at the playside defensive end spot, attacks the guard coming at him; this is the correct play, but it depends on the linebackers flowing behind to string the play out to the sideline. The rest of the defense is out of position as MSU sends five blockers and a ballcarrier against four Northwestern defenders. 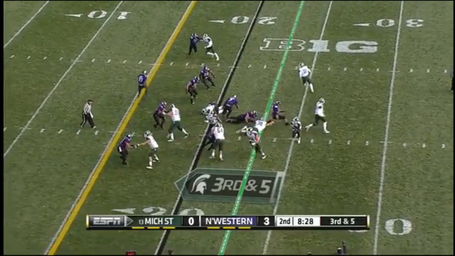 At this point, the play is over; Jimmy Hall is blocked to the sideline by the tight end, who is joined by the otherwise unoccupied center to completely bury Hall. The right tackle gets downfield to take Henry out of the play, leading to an easy touchdown.

The misdirection element of this play worked exceptionally well; MSU didn't block two of the eight defenders in the box and still had no trouble busting the play because those players were occupied by the receiver and fullback heading right. With those players out of the play, MSU could afford to double-team playside defenders if needed; executing multiple single blocks effectively turned the play into an easy touchdown.

I don't have a scheme point here; Northwestern had the numbers to play the run (though perhaps the personnel group wasn't ideal) and simply failed to diagnose the play correctly or to effectively shed blocks. "Execution" is a favorite explanation of losing coaches for what went wrong, which many fans find unsatisfactory; I tend to sympathize with the coaches on this point.