Northwestern spring football starts today! What you need to know

It might be early, but the Wildcats are starting spring football. What should we be paying attention to? Oh, nothing? Great.

Share All sharing options for: Northwestern spring football starts today! What you need to know

Ahhh, February 27. The sun is out, the bluebirds are chirping, and the whistles are in the... wait. /Looks outside /sees cold rain /remembers he's in New York /checks phone 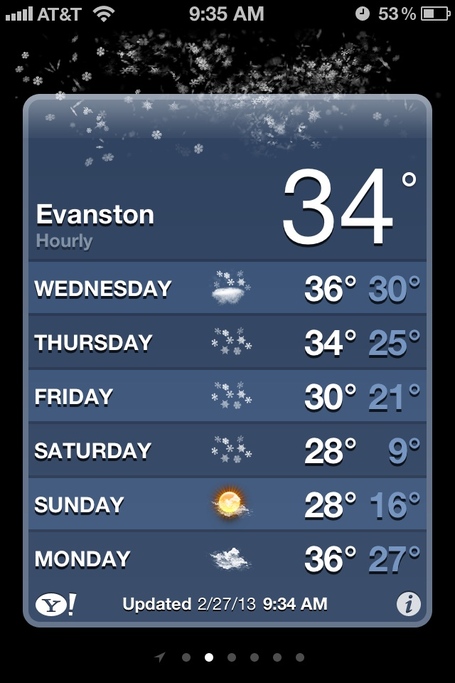 So, well, maybe not. But anyway, I figured I'd answer whatever questions Boldfaced Questions Guy has to ask about Northwestern spring ball. Here we go!

Not much. Just writing a post about Northwestern spring football.

Well, first off, that's not really a question, and second of all, yeah, you sort of stopped being relevant once nobody wanted to read Northwestern basketball previews.

Okay. My point is it's nice to talk to you. When's the spring game?

Why's it so damn early? It's snowing outside?

Pat Fitzgerald gave a few reasons. For starters, he feels the quarter system gives him an opportunity to extend practice over a longer period of time than they normally do, which helps them not screw up the team's predetermined lifting and do more quality control. And secondly, it helps guys who potentially get injured get back quicker. Not a bad line of reasoning. They're not the earliest - Army has been going for two full weeks - or the earliest BCS school - Texas got in action the 21st, Cal the 25th - but they are the first in the Big Ten, making sense because of COLD.

Secondly, some injured guys. Let's mark 'em off in tiers of importance:

Nick VanHoose - NU's best corner last year, easily. At least it's good to know he's getting his nagging issue dealt with now rather than later.

Damien Proby - a senior, we've seen this dude play well at linebacker for some time. With him and Chi ChiAriguzo back, that should be a strong unit.

2. Possible starters: Kyle Prater - yeah, this debate again. He was the star of last year's spring ball, at least from a "how many stories were written about him" perspective, so maybe this is good.

Paul Jorgensen - NU used him as a superback in goal line situations and he caught a touchdown against Illinois, but he could fight for whichever tackle spot Konopka doesn't play. Huge guy.

Deonte Gibson - was a nice defensive end recruit when NU got him, played a little as a redshirt frosh last year.

Matt Frazier - maybe a factor for one of the guard spots

3. Not likely to play: Andrew Scanlan - maybe a factor at wide receiver?

Jarrell Williams - had to look up his first name, but cornerback also has an opening

What should we be looking for in Northwestern spring ball?

Quite frankly? Not much. Having covered Northwestern spring football four years out of my four years in college, it's rare that the things you see in spring are huge indicators of what you see in fall. Sometimes you can find a guy you didn't expect to do much who you can tell will be a big factor - off the top of my head, it became clear very early last year that Nick VanHoose would be the starter at corner - more often you can't.

I speak from experience: I once made the mistake of writing stories in back to back years about how Jeravin Matthes and Alex Daniel would sufficiently fill in for Tyrell Sutton at running back and how Evan Watkins could push Dan Persa for a starting spot. The thing is, from watching those practices, I wasn't crazy wrong. It's what people were talking about on the sidelines and in the press box at the spring game. So here's why not to judge on spring ball:

First of all, its crazy early. This team practices through the spring, then in the fall, and as you saw last year, changes gameplans and personnel week-to-week throughout the year. There's a lot a lot a lot of time for things to change, and you generally don't find out the identity of a team until the season is more than halfway done - even if you did watch every open practice from start to finish.

Secondly, since there are no early enrollees. That means that a) the personnel are the same as last year, and you'd be much wiser to base your opinions on what you actually saw in the 12 three-hour games than a few semi-competitive snippets of practice you see. And b) there's nobody new, and if there is a freshman who will be a strong contributor, you wouldn't know it until fall ball.

And thirdly, a whole heck of a lot of guys are injured, a lot of whom will be big factors. It's really good that all those guys are getting healthy instead of playing, especially guys like VanHoose and Prater.

You mean the thing where Kain Colter and Trevor Siemian are both going to play? Yeah. That thing.

Northwestern continued to tinker with its gameplan for Colter and Siemian from week-to-week through the year last year, with Colter going from full-time-QB to wide receiver to sometimes QB to QB who never throws to eventually a guy who threw sometimes but ran more often and sometimes subbed out for Siemian. I think we'll probably the same thing happen week-to-week next year. Regardless, both guys will be contributors, and its very unlikely something happens in March that changes that.

Would you say your continued insistence on writing posts where a make-believe character asks you questions about sports is a response to the fact that you work from home, and the subsequent lack of human interaction that goes along with it?

Because this is a 10-win team returning 15 starters, including a bunch at important positions. There's 125 teams kicking off spring ball in the next few weeks. Less than 20 can say they're better than Northwestern. Seriously. Look at the rankings. This will be a very good football team in the fall, and we're going to see some nice things written about them between now in August, and then we'll see them ranked in the preseason. If people from around the country think Northwestern is going to be good next year, maybe get up on them.