Sippin' on Purple's MountainTiger went behind the scenes at California's spring scrimmage. Well, not really behind-the-scenes, but, in front of them.

Not long ago, Rodger revealed the dirty secret of Northwestern football: it's really, really boring to write about. So boring, in fact, that I decided to start writing about an entirely different program.

OK, not really. Actually, I am a grad student at Cal, Northwestern opens the season in Berkeley, and new football coach Sonny Dykes has opened spring practice to fans and media. Dykes has a bit of a reputation among coach bloggers for running model practices with an emphasis on high tempo and maximizing reps, so I thought I would go see what all the fuss is about. SBNation's Cal site, the California Golden Blogs, has been providing coverage of every practice, with a particular focus on the wide-open quarterback competition. Since they do such a great job, I recommend that you head over there if you want to know who seems to be winning the battle to get on the field against Northwestern. 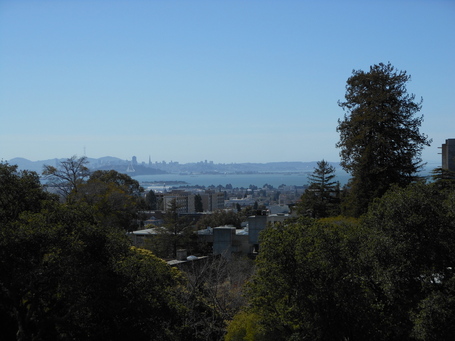 With the sun shining on a Saturday afternoon, the LadyTiger and I headed into the recently renovated Memorial Stadium. After picking up a roster and pausing in the concourse to admire the view across San Francisco Bay, we sat down in the shade of the press box to watch. DJ Khaled was blasting on the PA and players were milling about doing the things football players do before practice starts. A sparse crowd of fans was there, ranging from students to a couple of old-timers complaining about the last coaching regime. The weather in the stands was ideal, though I imagine the field was on the warm side. 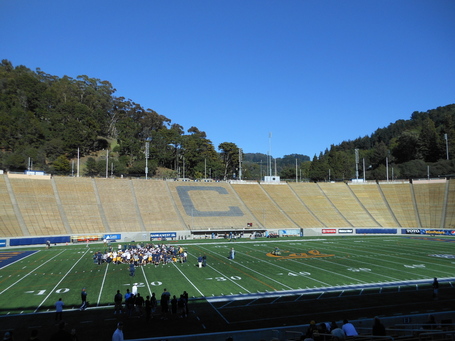 When the first period started, the team split up for warm-ups with their position groups. The quarterbacks and receivers went through drills that were recognizably descended from the Airraid drills that Chris Brown described a few years ago, though Cal's approach to a couple (settle-noose and pat-n-go) is a bit more elaborate. The rest of the team did drills with a similar emphasis on warming up while practicing football skills: linemen coming out of their stance and using their hands, running backs taking hand-offs, and so forth. After a half hour, the team came together for a brief period of dynamic stretching before the real work began. The music went off. 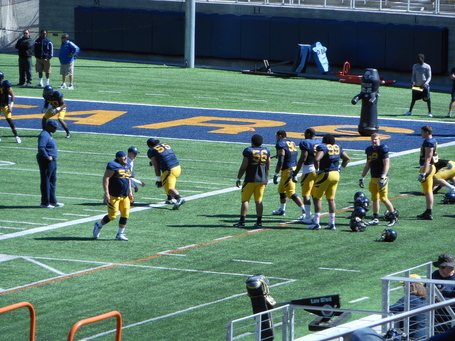 On the north side of the field, the offense began running through their routes on air again. This time, offensive coordinator Tony Franklin got much more involved with the quarterbacks and receivers, occasionally yelling coaching points and demonstrating techniques. On the south side of the field, defensive coordinator Andy Buh had his defense once again work from individual technique work to team drills, eventually bringing the whole defense together. Once both units had worked up to 11 man drills, the back 7 came to the offense's side of the field for some 7-on-7 while the offensive and defensive linemen practiced on the other side. The whole practice had a clear progression, with drills structured to start with individual technique and then gradually integrate larger and larger units until the entire offense and defense was working together. 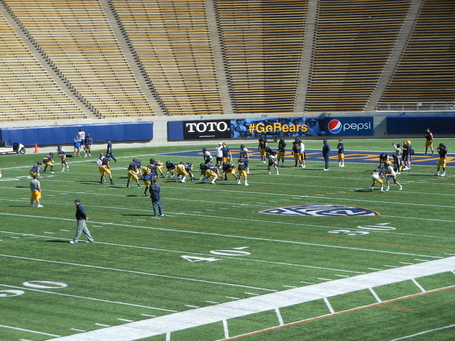 At about this point, I finally realized that the centerpiece of the practice was a scrimmage, Cal's first of the year. After the team got together one more time, the offense headed to the east sideline and the defense to the west. The practice clock went to 40 minutes, and the team started playing. The scrimmage was as uneven as you would expect for a team that has only practiced 6 times under their current coaches, but the offense was recognizably the same system that allowed Louisiana Tech to put up 57 points on Texas A&M last season. Highlights included the easiest 95 yard touchdown you could ever see off of a blown coverage and a perfect back shoulder fade followed by the receiver dragging his tackler several yards. The defense usually seemed a bit behind in coverage, though the defensive line looked good on both runs and passes. As one would expect for a hurry-up team, the offense used a few different tempos to keep the defense off-balance, with some success.

After the scrimmage, as many of the fans filed out, most of the team started work on kickoff returns while Tony Franklin took the quarterbacks off for a bit more work. I stuck around until the team got together for a final speech, at which point I headed home.

What did I take away from the scrimmage? First, the Airraid lives, at least in terms of practice philosophy. I don't expect Cal to match Hal Mumme's Kentucky teams in terms of pass-wackiness, much less Mike Leach's Texas Tech or Washington State teams; what I do expect is that the intense focus on maximizing useful reps in practice will pay dividends for the team's preparedness. They didn't have everything figured out on Saturday, but come this fall Northwestern won't be able to rely on Cal struggling to execute or displaying poor technique.

Second, the Airraid is dead in terms of what the offense actually runs. Mike Leach is still throwing the same few dropback passes on 80% of downs, but Cal's coaching staff has left that approach behind. All signs point to Cal running essentially the same offense that Dykes and Franklin used last year at Louisiana Tech, an offense based around run/pass packaged plays and high tempo. The dropback game is still there, but Cal won't make it the centerpiece of the offense. Tony Franklin's influence is particularly evident in the offensive tempo: last year, Louisiana Tech ran 1,054 plays in only 12 games; the most a Sonny Dykes-coached Arizona offense ever ran in a year was 914 in 13 games. I expect Cal to aim for Louisiana Tech's tempo this year.

Finally, Andy Buh has a great job. He appeared to have the freedom to run his part of practice as he saw fit; I'm not sure I saw Dykes on that half of the field. For a coach with experience as a coordinator in a non-AQ conference, a job with significant freedom to run one side of the ball looks like a great stepping stone to a head coaching position. His defense still needs to show results, but the opportunity is there. 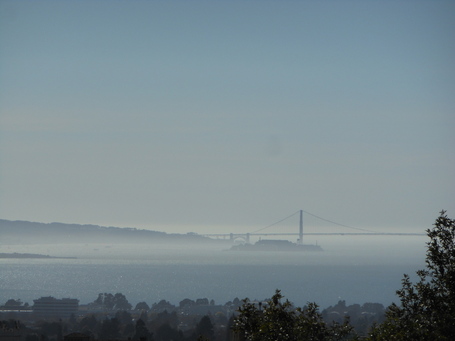 As you might already know, I'm a football junkie. Getting to go out and watch some spring ball was fantastic, but I am already counting down to the season opener in August. If you are considering a trip for the game, I highly recommend it. The stadium is a classic venue in a stunning location, Berkeley is a nice place at that time of year, and Cal should be a fun opponent. I've been a believer in Dykes since the hire was announced, so I expect NU to need all the support we can give to come away with a win.