Northwestern's unmitigated recruiting success, a lack of available scholarships, and a slew of seniors leaving early make us wonder: is it smart to continue redshirting pretty much everybody that comes through the program?

The stories are too easy to tell: four-star dudes in QB Clayton Thorson, RB Justin Jackson and probable RB Dariean Watkins. Three-star dudes like RB Auston Anderson and OL Tommy Doles who had offers from their home state schools in Texas and Michigan - Texas and Michigan! - and chose Northwestern. OL Blake Hance, who had offers from Nebraska-Illinois-other B1G schools, but waited on a Northwestern offer and committed the next day.

And we're in May, months before this is supposed to happen. It's unparalleled. It's not even worth comparing to past classes - this is Northwestern's best in history. Read Jared Shanker's story from yesterday about how recruiting success breeds recruiting success - it's happening.

However, it raises some questions: for years now, Northwestern has tried to compete with guys the recruiting process frowned upon. NU had to adopt certain strategies to make them competitive regardless - schemes, scheduling, etc. All this awesome success - and some things that have happened to NU that have seemed sub-optimal - got me wondering if one of those strategies should change. 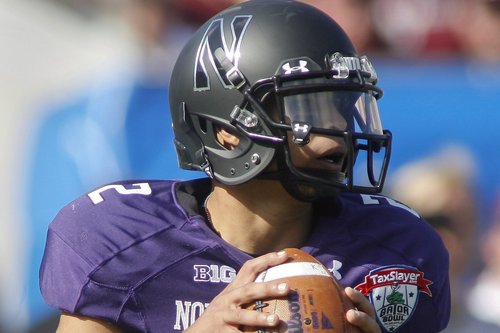 Even Ohio State blog Land-Grant Holy Land is starting to notice that Northwestern is killing it en masse, and starts to wonder where Northwestern fits in the Big Ten's power struggle - this year and for the immediate future.

Northwestern already has 10 recruits. Unfortunately, they only have 15 spots in the class. As LTP firmly outlined a few weeks ago, Northwestern's recruiting road map is planned out for the next few seasons already, due to Northwestern's strategy of keeping players for five years as opposed to playing them as true freshmen. That leads to smaller classes and less talent coming in.

On the one hand, the lack of available scholarships puts pressure on guys to pledge early, and Fitz's emphasis on strong commitments means guys typically don't leave. To a certain extent, it forces guys' hands.But it also could kill momentum: if Northwestern reaches 15 players relatively soon, the buzz around the program could die off, as will Northwestern's ranking - right now they're No. 12 in 247's composite, but that's heavily based on number of recruits.

Pat Fitzgerald's lack of interest in playing true freshmen made sense on multiple fronts when you considered the school's historic lack of recruiting prowess. For starters, when you get less players, you need to make them last longer. Why force yourself to need 21 guys when you're struggling to get 18? And less highly touted players are less likely to be able to fill in right away: Fitz has always said guys talented enough to play will play, but that often hasn't been the case. And with the exception of Luis Castillo, there haven't been a whole bunch of Northwestern players leaving school early for the NFL. Thus, Northwestern implemented the five-year plan for the majority of players, who would develop their first year, hopefully turn into something by seniors, and get their degrees.

Which was fine. It worked.

But there's a reason schools that are unbelievably successful go towards oversigning, which is skeezy and wrong and Northwestern shouldn't do. Bringing in more guys means more available players, more opportunities to create better players, more competition, and then eventually better on-field talent.

This past year, Northwestern began showing signs of struggling with roster attrition. If you remember from November, nine players from the class of 2009 opted to forgo their final seasons of eligibility. None of those players played as freshmen, meaning Northwestern essentially wasted nine roster spots in a season. It stands to reason that if those nine players weren't useful as seniors, they probably wouldn't have been as freshman. But by redshirting them, Northwestern never got to find out. NU doesn't seem to have any graduate transfers coming into the program and left scholarships on the table in 2013 recruiting, so I'd imagine those additional scholarships will just go to walk-ons and the like. Having walk-ons earn scholarships regularly is an awesome part of Northwestern's program, but, man, nine is a lot to fill.

The combination of a) relatively few scholarships being available as Northwestern recruiting reaches its best period ever while b) seniors are actively leaving the team without taking advantage of redshirt senior seasons means perhaps it wouldn't hurt Northwestern to try out a few guys early. It could get more competition on the practice field, more talent on the field, provide a slight uptick in recruiting, and genuinely continue the positive momentum of a squad that's got tons of it.

It's 2013, and things are starting to get a little bit interesting for Northwestern football. Maybe we don't need to do things the way we've been doing them anymore.

And many of the times they've opted to play true freshmen, it hasn't panned out. Adonis Smith and Arby Fields both played as true freshmen, didn't live up to promise, and transferred out of the program. And I think we'd all trade Venric Mark and Kain Colter's 2010 seasons - Mark caught five passes and had a kick return touchdown in a 70-23 beatdown against Wisconsin, Colter served as Evan Watkins' backup/change-of-pace guy in three losses when Dan Persa was hurt - for another season after they broke out as stars.

But it's 2013, and things are starting to get a little bit interesting for Northwestern football. Maybe we don't need to do things the way we've been doing them anymore.

Although on the other hand, maybe we shouldn't change a thing.