Northwestern doesn't always bring in a nickelback, but when they do, Jimmy Hall makes plays.

Share All sharing options for: Northwestern and Defensive Substitutions

Mgoblog recently posted a nice piece on the nickel package and how Michigan has adjusted their defense to the modern spread-heavy environment, where 3 or 4 receivers aren't necessarily on the field for a pass. Since it is the offseason and I have nothing better to do, I though I would take a look at a couple of plays from Northwestern's BOWL WIN over Mississippi State that show how Northwestern's defense deals with spread offenses from both the base defense and sub packages.

Northwestern doesn't automatically sub in a defensive back when the offense brings on a third receiver. Look at this photograph from the first quarter, with Mississippi State driving on the Northwestern side of the field. The Bulldogs started out with trips left and a running back before motioning the back to the far right. Since it is first and 10, Northwestern is in their base defense with Chi Chi Ariguzo splitting the inside receivers on the trips side and Damien Proby splitting the inside receiver and the tackle to that side. 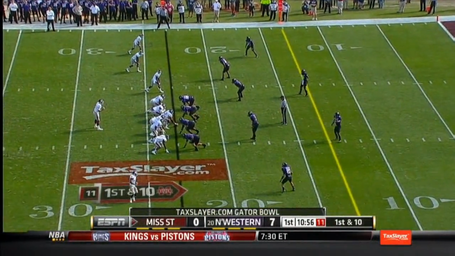 This is a nice look for Mississippi State for a few reasons. On the trips side, they have 3 receivers matched up with a corner, a safety, and two linebackers; this makes man coverage dangerous for Northwestern and puts receivers in position to work against linebackers in underneath zones, a favorable matchup. On the other side, not many running backs will consistently beat a cornerback, but splitting the back out wide means that the tight end should have plenty of room to work against the linebacker and safety. The running back motion, then, can take Northwestern's best corner out of the picture. 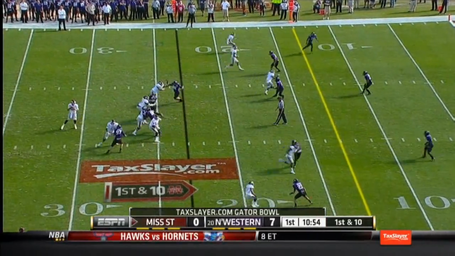 As the receivers head downfield, you can see how this develops. On the left, the corner drops into a deep zone and Jared Carpenter stays deep in the middle. The linebackers are now outnumbered 3 to 2 if the receivers all run short routes. On the right, Nick VanHoose stays in a short zone as the running back hooks up at 5 yards. Northwestern is playing 3-deep zone coverage rolled to that side of the field, which leaves Ibraheim Campbell solely responsible for any deep route from the tight end. At this point, the tight end is clearing the linebacker and is wider than Cambell; this is good for Mississippi State. 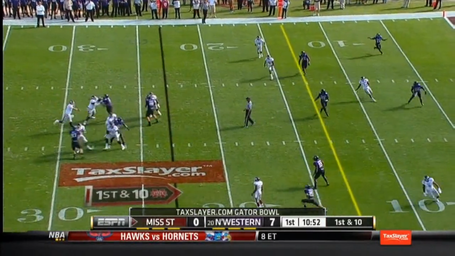 On the left, the offense is running a levels concept, and Northwestern isn't in awful shape considering; the deep in is bracketed by a defender underneath and over the top, while Ariguzo is in position to make a play on the underneath crossers. There is a decent throw to the outside receiver, but Ariguzo should, at the very least, be able to make a tackle. The right is a different picture. The tight end has broken outside on a corner route, completing a smash concept, and Ibraheim Campbell is well off the route. Tyler Russell throws that way. 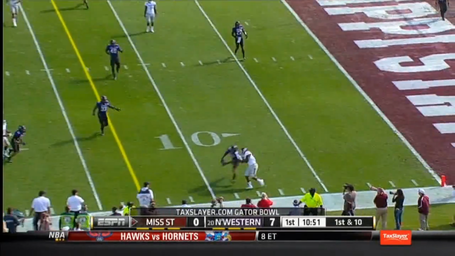 Fortunately, Campbell makes a perfect break on the throw and picks it off. This play worked out for Northwestern for two reasons. First, NU didn't ask the linebackers to do anything they couldn't handle. Keeping all three linebackers in underneath zones means they don't have to be able to run stride-for-stride with receivers or make difficult plays downfield in man coverage (Iowa gave up a 47 yard TD to Northwestern by asking a linebacker to do just this). Second, Ibraheim Campbell has great range in coverage. Russell had a good chance of completing the pass, but when the ball was just a bit slow to arrive, Campbell made him pay.

While Mike Hankwitz likes to use base personnel on early downs, Northwestern tends to substitute in passing situations. Later in the first half, Mississippi State reached the red zone, but a few false starts put them in a 3rd and goal from the 10. Mississippi State started in an empty backfield this time, and Northwestern took out a defensive lineman and a linebacker and brought in Jimmy Hall and Daniel Jones to strengthen the pass D. 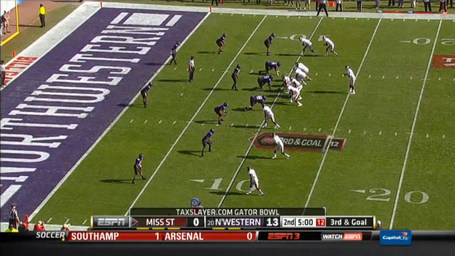 On the right, the two-receiver stack gets a two-defender stack, while the trips to the left get an almost identical look to the play above: a corner (Quinn Evans) playing off on the outside, a safety (Jared Carpenter) just inside the hashmarks, and two defenders lined up underneath. This time, however, the underneath defenders are Daniel Jones and Jimmy Hall instead of Chi Chi Ariguzo and Damien Proby. 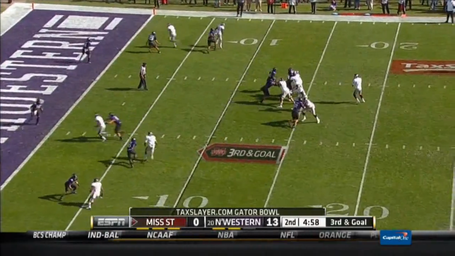 Instead of the zone coverage from the first play, Northwestern plays man coverage with two safeties providing deep help. The coverage disguise isn't perfect (the way the defense plays the stack strongly suggests man), and Tyler Russell quickly diagnoses the coverage and looks for his go-to receiver, Chad Bumphis, running a corner route from the inside position on the left. Bumphis gets outside both Jimmy Hall and the safety help, and Russell pulls the trigger. 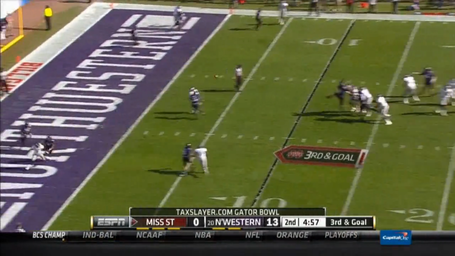 Once again, a Northwestern DB makes a great play on the ball to prevent the completion. Instead of the deep safety, however, it is Jimmy Hall in man coverage, who gets his head around and gets a hand on the ball.

What Hall does on this play is something you simply can't ask a linebacker to do successfully. He not only runs with the receiver going deep but also gets his head around, locates the ball, and makes just enough of a play to disrupt the catch. While modern defenses are more concerned than ever with defending the run from spread formations, the primary reason to bring in additional defensive backs remains the advantage they provide in coverage. What makes Hall's play here particularly impressive is that he is, in terms of the base defense, a safety and a big one at that; he was listed at 6-2, 210 for the Gator Bowl. A nickelback who can provide beef against the run and hold up in coverage is a nice asset.

At this point, I expect Hall to once again play the nickel in 2013. If he finds his way into the starting lineup, however, look for Cal to test his replacement early and often in the season opener.