Deonte Gibson is one of several real talented young defensive ends for Northwestern - how can this strong pass-rusher contribute in 2013?

One down, 98 more to go. (huffs something huffable)

Anyway, this lovely weekend day brings us Deonte Gibson, a 6'3, 240-pound defensive end from the Cleveland area - Lakewood, Ohio, to be exact. He started to show his potential last season as a redshirt freshman, what bigger things does this rising sophomore with a knack for pass-rushing have on deck?

Gibson was one of the more fearsome defensive players on one of the nation's best high school teams. His St. Edward's squad - its in the Cleveland area - was ranked No. 2 in the nation per SuperPreps, and won a state championship. (Gibson is one of three players from St. Ed's on the Wildcats, in a how-come-Dillon-wins-the-Texas-state-championship-on-FNL-but-like-only-one-dude-on-the-team-goes-to-college twist.) He earned the Cleveland Plain Dealer's Defensive Player of the Year honor was the No. 39 player in Ohio in 2011 per 247's Composite ranking. That would earn him some decent schollie offers - Stanford, Louisville, West Virginia, Pitt, Cincinnati, and Kansas - but the three-star prospect would choose the Cats.

Here he is being mean to people in high school:

Gibson might have been good enough to play as a true freshman, but redshirted to recover from an ACL injury. He'd cracked the 2012 two-deep out of training camp. He'd trade spots on the depth chart with Ifeadi Odenigbo a bit early after dislocating his elbow against Syracuse, but after Odenigbo himself had a season-ending injury, Gibson would become a third-down defensive end for the Cats, spelling Quentin Williams in passing situations. He'd record nine tackles, two sacks on the year.

Against Michigan, the Wolverines faced third-and-10 down seven in the third quarter, and sent Devin Gardner out to scramble around and hope something came open. He fiddled around for a while and ended up all the way on the right sideline. But after beating his mark, Gibson came all the way from the left side of the line of scrimmage to chase down Gardner. (Hat-tip to Inside NU for reminding me of this play.)

I mainly listen to rap, but I know Led Zeppelin is the best rock band of all time. And Jimmy Page is probably the best guitarist, in my eyes. And this is one of the songs wherein he goes the most nuts. He probably plays a higher percentage of wrong notes than any other guitarist we call great, but he manages to combine being lyrical and straight shredding like nobody else. He uses a Gibson Les Paul. It's why I bought one of these: 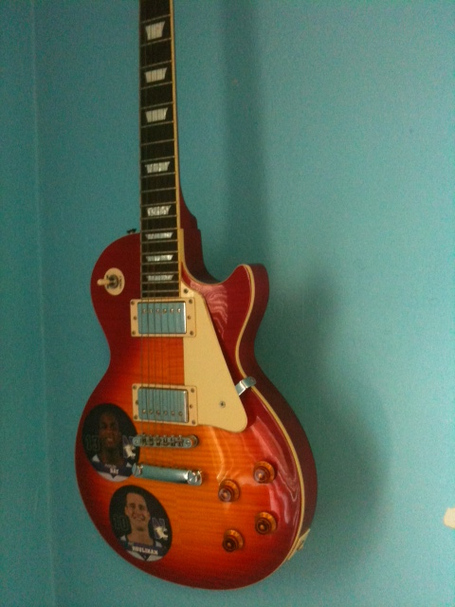 Its name is Marlon, although I rarely have opportunity to refer to it in the third person, except for when talking about it on my Northwestern sports website, I guess. It's an Epiphone. I'm not made out of money.

(NOTE: I was going to post "Since I've Been Loving You", but apparently I did that in this same post last year.)

Corbin Bryant was a pretty damn serviceable defensive tackle for Northwestern for five-ish years, and now he's on the Bills, so that worked out well. Between Bryant and Corey Wootton, NU had an NFL-caliber line and I was busy talking about Vince Browne.

How he can help

It's interesting to see whether or not the coaching staff thinks Gibson is ready for full-time defensive end duty. Gibson's a great pass-rusher: Both of his sacks last season - one against Iowa, and the previously described Michigan one - were on third down situations where the quarterback spent a little bit more time behind the line of scrimmage looking for an option downfield than they might have in a less obvious situation. Gibson's natural speed was an obvious benefit with the quarterback just leering around, as he shortened the amount of time the QB had and turned completions into coverage sacks. Northwestern will need someone who can make plays against the run and someone who can even occasionally drop into coverage opposite Tyler Scott, Quentin Williams pick-six style. Has Gibson rounded out his game to be a full-time DE yet?

We have Gibson as a backup at the defensive end spot opposite Dean Lowry, but don't read too much into that. Scott's an obvious starter, and besides him, Northwestern has three young, talented defensive ends - Gibson, Odenigbo, and Dean Lowry - all of whom have oodles of talent at relatively early times in their career. I think Lowry gets a spot with Gibson behind/sharing snaps - perhaps an early down/late down split that benefits Gibson's pass-rushing speed while Odenigbo develops behind Scott.