Cool things are happening with Northwestern football. Wait, what's this weird feeling? Why are the edges of my mouth curling upwards?

Hey y'all! It's May 7. Football is a super-long way away, but I don't think I'm the only one who can't stop thinking about it, and two things yesterday happened to make this a thing.

1) Dareian Watkins committed to Northwestern. Watkins is good. Super-good, per the people who pay attention to such things. The 6'2, 192-pounder is a high school quarterback, but has the speed and athleticism of a slot receiver in college, a consensus 4-star player. He had offers from Michigan State, Penn State, and, well, maybe it's easier to just say every school in the conference besides Michigan, Ohio State, and Nebraska. He posted a really excitable post to Facebook about how pumped he is for Northwestern football. He has a crazy story that makes you root for him.

I don't post about it much because I can't vouch for recruited players, and also because normally, Northwestern isn't in the mix for elite-ish guys. Well, now they are. As Inside NU detailed, Northwestern is working on one of the best recruiting classes in school history, per guys who know what they're talking about. Clayton Thorson is a four-star quarterback, Watkins is a four-star receiver, the other five guys in tow are all well-regarded three-stars, and a variety of other top recruits Northwestern typically doesn't compete for are still out there.

The momentum Pat Fitzgerald is building is very, very, real. In the Catch-22 scenario where you need to win to recruit and you need to recruit to win, Northwestern has already begun winning. Now, the payoff is starting to come. Very talented kids are starting to pick the Wildcats instead of the other guys, and now you start to wonder: if your team just came off a 10-win season with guys nobody wanted and a few standouts, what happens when you actually have the guys other teams were looking for? The future of Northwestern is bright, and it could get even brighter.

On the other hand... Illinois! 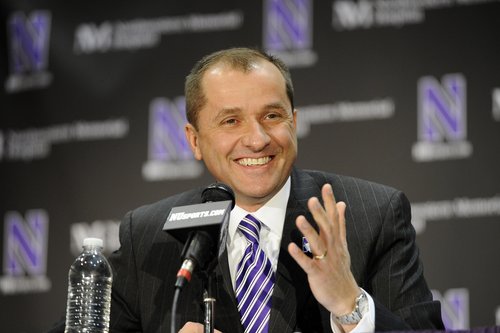 While everything Northwestern does seems to be awesome, everything Illinois does is somewhat of a strugglefest

2) Northwestern's first two home games, Syracuse and Western Michigan, will be under the lights, in addition to the game against Ohio State that's already under the lights. Northwestern even put in a splash page with a kickass video that will get you hype.

Yo! Football under the lights! Its thing No. 327 that makes me wish I were still in college, because now we have to come up with excuses to drink all day instead of just doing it. It's also an awesome atmosphere that looks pretty.

And that's the thing we're talking about here: atmosphere. Three of Northwestern's first four games will be prime-time, and like we said up there, we're talking about a team coming off a 10-win season with a bowl W and not losing many starters. And we've already seen that Jim Phillips and crew have boosted NU's marketing and stuff throughout the area around the school, and that's resulted in ticket sales.

For all the fun and stuff last season brought, Northwestern still only had 35,000 a game in attendance. It's an uptick , but even with a game sold out for us by Nebraska fans, it's not very impressive. You have to imagine that everything surrounding the team - and the three night games - boosts that up a bit.

Ionno about y'all, but my expectations are higher than they've ever been for Northwestern football. The team is ranked, the schedule isn't insanely difficult, and really big things, win-wise, could happen.

Am I crazy? Is this all going to end poorly, with Northwestern going like 6-6 and losing a bowl game and everything seeming like this past year never happened? I dunno. Perhaps. But right now, the point is, we're over 100 days til football season - past the halfway point! - and I'm bouncing off the walls for August.