Coach Pat Fitzgerald was first up at Big Ten Media Days, and mentioned NU's tough non-conference schedule as well as the fact that Northwestern has to do things besides just appear in bowl games.

Share All sharing options for: Pat Fitzgerald at Big Ten Media Days: 'It's Time For Action'

Pat Fitzgerald was thefirst up at Big Ten Media Days, and I was ready to take notes on what Northwestern's head coach in his official first interaction with the media of 2013... and... well, my computer randomly turned off three minutes in, and now won't turn on. Highlights, by people whose computers were on.

Fitz started off by mentioning that he's excited -- he asked if anybody out there was charting how many times college football coaches said they were "excited" at Media Days, and mentioning that his team had been to five straight bowl games. But:

Fitz: "We're not just satisfied with going to bowl games anymore. That's not acceptable...The expectation is to win championships."

Off the heels of our longest bowl streak and to have the number of men we have coming back gives us great confidence that we'll be able to take the next step.

Fitz talked about the schedule, which features a Cal team and Syracuse team in the first few weeks:

We will adjust our practice plan during the Cal week to prepare for time zone and game time change.

On the offensive line, where he feels Northwestern has players capable of sliding in at right tackle and the two guard spots:

Fitz: "Entire offensive line is heathy coming off the spring and going into Camp Kenosha. There will be great competition among that group."

On discipline, where some people thought he took a shot at Ohio State (he didn't):

Fitz: "I think disciplining begins in recruiting." Wonder what Urban will think of that one.

Fitz admits that NW is often a little late in offering recruits, but they need the extra time in making sure they're getting the right caliber of person for their program. Seems to be working. - MB

He mainly answered questions on targeting by discussing how much he cares about player safety, and brough up hockey:

Fitz taps into his #Blackhawks love to answer question about "targeting" penalties ... wants CFB to be safe for w/focus on athleticism.

And on the big OSU game?

Fitz on OSU game: "You get excited for B1G play. Last time we played them at night was pretty special."

And last but not least, look at how shiny he is! 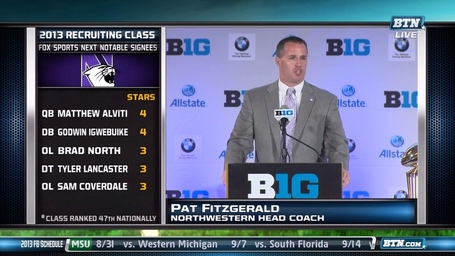 Typical Fitz, not much to discern from it, but he somehow managed to say all the right things.