In 2012, Northwestern's defense got better in the most important part of the field.

Bill Connelly's summer team-by-team preview series is one of my favorite parts of the football offseason; if you haven't read the Northwestern preview, go take a look. Connelly isn't content, however, to merely preview every team; he also has kept up a solid pace of general stat posts. Of particular interest to Northwestern fans is his recent pair of posts on offensive and defensive success at creating and converting scoring opportunities, in this case defined as possessions inside the defense's 40 yard line. In both cases, 2012 Northwestern had an interesting pattern: mediocre outside the 40 (61st at crossing the opposing 40 and 52nd at preventing opponents from crossing the 40) and above-average inside the 40 (45th on offense and 29th on defense in points per trip inside the 40).

The best example of the defense tightening up close to the goal line came against Michigan State; the Spartans advanced the ball inside the Northwestern 40 8 times but came away with only 18 points (2 touchdowns, a two point conversion, and a lone field goal), a miserable 2.25 points per trip inside the 40. Northwestern's defense wasn't the only factor, as MSU missed a field goal and turned the ball over off of a fumbled snap, but the defense did make a critical goal line stand in the second quarter that produced a turnover on downs. The final play of that drive provides a perfect example of how to stop a short-yardage run.

On third down, Le'Veon Bell came within inches of scoring a touchdown, and Michigan State chose to try again on fourth down from inside the one yard line. The offense initially lines up in an I-formation with a tight end on each side of the line and an h-back on the left. 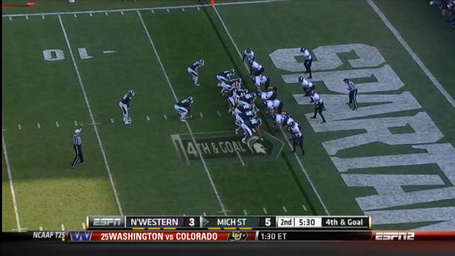 Northwestern has 8 men on the line, with 4 defensive linemen pinched inside and a linebacker and safety to each side of the line. This accounts for all 8 gaps from tight end to tight end, which should force the offense to move somebody if they want to run the ball. When the h-back motions right and then into a second fullback position, one of Northwestern's second line of defenders follows him, but the rest of the defense stays in their original positions. 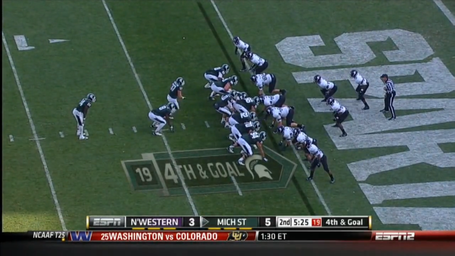 Michigan State's plan is to run Power to the right, using a pulling guard and both fullbacks to blast a hole in the defense. Because they have two fullbacks, the offense can double team Tyler Scott and kick out both the linebacker and the safety on the right side, which should allow the pulling guard to take out any linebacker who tries to fill the hole. If the other Northwestern linebacker somehow gets to the hole, Bell's strength should allow him to push forward for a yard without too much difficulty. 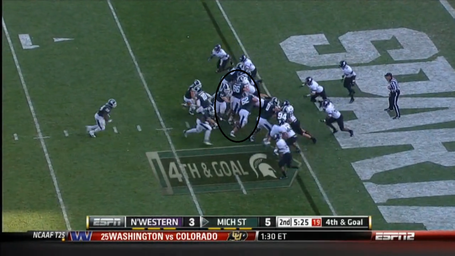 The playside double team works perfectly, blasting Tyler Scott inside. The two edge defenders on the playside start upfield, but the fullbacks should be able to seal them outside-if the blockers arrive on time. The problem for Michigan State is that the center and right guard struggle to deal with Northwestern's defensive tackles, who drive the offensive linemen a full yard off the line of scrimmage. This creates a cascade of problems: the left guard is forced to retreat, slowing him down on his way to the hole. Because the second fullback was lined up on the left side, he is stuck in a traffic jam as the guard and Andrew Maxwell block his path to the playside. 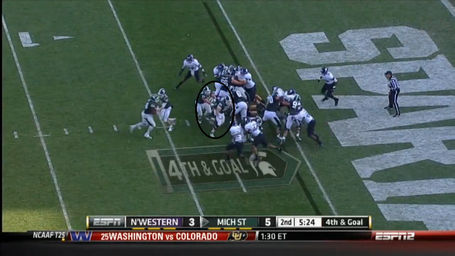 By the time Bell receives the handoff, the offense's trouble is obvious. The good news for the offense is that the point of attack looks clear; the pulling guard is finally clear of the center and right guard, and he has a target in the form of David Nwabuisi, who has scraped over the double team and into the hole. The second fullback, however, is still stuck behind the guard, and both Ibraheim Campbell and Chi Chi Ariguzo are several yards in the backfield. The first kick-out block, on Ariguzo, shouldn't be a problem; the second, on Campbell, requires the fullback to close ground quickly. 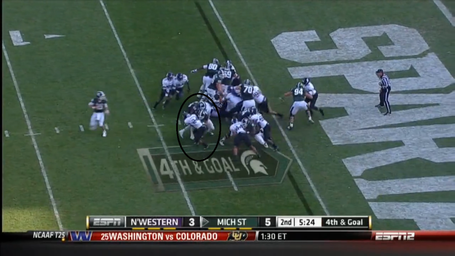 Bell, Campbell, and the h-back all meet in the backfield, and Campbell is able to stop Bell's momentum even while being hit by the blocker. This is not how you draw it up. 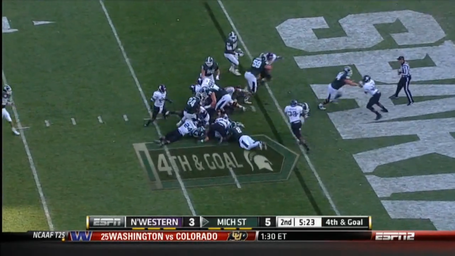 With Bell stood up, the backside defenders are able to clean up the play, ensuring he doesn't escape.

What I love about this play is the way that penetration from the defensive tackles disrupts MSU's blocking scheme. By simply delaying the arrival of blockers coming from the backside, the tackles allow edge defenders to make a stop in the backfield. When a defense is backed up like this, a push in the middle of the line is essential to preventing the offense from walking into the endzone.

Defensive tackles don't produce very useful statistics because so much of their impact is like this play, disrupting the offense's blocking scheme to create a play for somebody else. This is why, even though Brian Arnfelt's statline (25 tackles, 6 for loss, 3 sacks) was slightly worse than the best 2011 DT performance (34, 6.5, 3 from Jack DiNardo), I think Arnfelt might be the biggest loss from the 2012 team. As this play shows, Arnfelt wasn't the only tackle who could get into the backfield, but he was the most consistent by far. If this year's defense is as good as or better than last season's, the emergence of one or two playmakers in the middle of the line will be one major reason.