Under Armour continues to be the best, outfitting Northwestern with an ALL-WHITE EVERYTHING look for Cal.

Northwestern said they had a surprise for the season opener at Cal, and we immediately guessed it was something uniform related. Sure enough, it's an all-white look featuring the debut of white helmets.

TAKE IT AWAY JEEZY

The white jerseys and white pants are of course part of Northwestern's standard set, but the helmet is new.

My initial reaction? DAMN, this looks sharp. Under Armour has really killed it with Northwestern's uniform combos and one-off items, and although I'm not always a fan of the monochrome, there's something really nice about the presentation here.

(Update: I figured out what I like about it: Normally Northwestern helmets are purple (obviously) with the logo in white. This time, it's vice-versa, which matches up very nicely with the TV numbers on the uniform (which are the same font.) And the silver outline is nice too. Even last year's black helmets had a silver N on it rather than purple, so this is a first. It's surprising it's never been done.)

Here's a closer look at the helmet as it looks with the jersey: 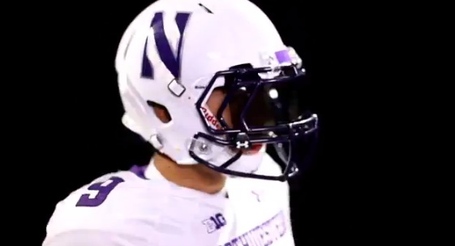 And here's a look at just the helmet: 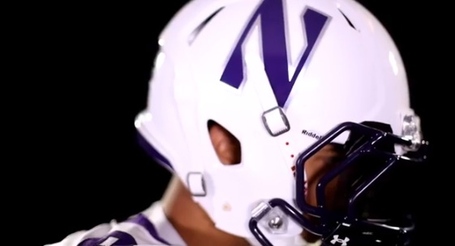 Per HailToPurple's uniform database, Northwestern hasn't worn a white helmet since the 60's, and even those look kinda silver-ish. Last year, Northwestern wore black helmets for the Nebraska game -- although they didn't officially announce it at first -- and then brought them back to the bowl game.

Bad news? Northwestern wore white jerseys on white pants twice last year, and that accounted for two of Northwestern's three losses. I guess time to change that up.

Seth Meyers has a joke:

Northwestern opens before Labor Day so they will be wearing their SUMMER WHITES! http://t.co/oR0uXmbdlI

My take on NU’s all whites: http://t.co/1NyEePzIjY