It feels like a perfect night/to dress up in Fitz shirts.

Share All sharing options for: I did something dumb about the fact that Northwestern is ranked 22

About two weeks ago, I tweeted this:

I'm going to do something very, very stupid over at @sippinonpurple in the next few days. Not that I don't do that already, but, stupider.

I bet a lot of you were curious about what that was referencing, to the point that you were unable to go about your daily lives.

Well, now I'll tell you. In case you didn't remember I got really excited about the fact that Northwestern was ranked No. 22 in the AP Poll, USA Today poll, Paul Myerberg's countdown, SI.com countdown, and pretty much everywhere else. I was excited about this not only because it meant that Northwestern was good at football and ranked in the preseason for the first time since 2001, but also, because I am passionate about few things in life as much as I am passionate about Taylor Swift. She's great and makes great music and she's really pretty and I want to hold hands with her and get into a very short-lived, yet passionate relationship where we talk about feelings and snuggle and then for some reason she furiously breaks up with me and writes a song about it. (I get the sense this is run-of-the-mill for Taylor Swift relationships.) this is relevant because her most popular song at the moment is entitled "22."

I can confirm that I can listen to it up to six times in a row without taking a break. It is really good and the best, and as a 23-year-old, I am extremely wistful for my far-gone youth when I was but 22 years old, and therefore would like to continue feeling like I'm 22, even if I am a full year older than that and basically about to die.

So I did what I thought was reasonable and wrote, played, sang, and recorded a cover version of "22" by Taylor Swift entirely about the Northwestern Wildcats.

Unfortunately, after three attempts at filming myself singing it, I never once made it through without lapsing from my stupid lyrics about Northwestern football into Taylor Swift lyrics. Also, I really suck at singing and kinda sound like I'm mumbling to myself most of the time. So I aborted mission. To provide evidence that this actually happened, a screenshot: 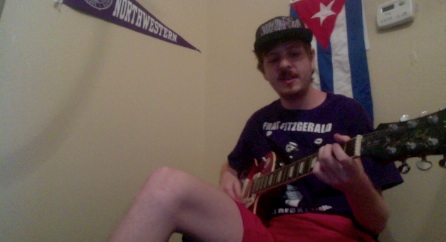 (Other problems: I spent the entire time either looking down two inches below me or off into space without ever once looking at the camera.)

But that video will never see the light of day, I promise you. I already deleted it from my computer.

However, I have here the brilliant lyrics to "22" by Rodger Sherman, inspired by Taylor Swift/Pat Fitzgerald. . If you can get Taylor Swift to read them and get her to like Northwestern sports and get her to go to dinner with me and maybe we can go to one of our houses and watch Netflix together, I'd really appreciate that.

Yeahhhhhhhhhhh yeah, We're starting Kain and Trevor at the same time
One's quick the other passes it yeahhhhhhhhhhhhh
Tonight's the night the purple makes some headlines
It's time...

I'll work on singing so my next Taylor Swift song goes off without a hitch. (btw Taylor call me)