Plays of the Week: Taking the Bad with the Good

One play's touchdown is another play's interception

Share All sharing options for: Plays of the Week: Taking the Bad with the Good

First, I want to share a picture that NU Highlights (if you aren't familiar with his work, you should definitely check it out) shared on Twitter: 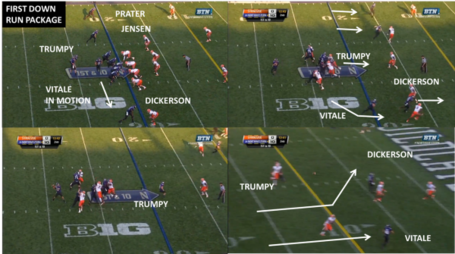 This is a great example of the post from Dickerson clearing out the deep coverage and letting Dan Vitale run past a linebacker on a wheel route; NU scored off a play like this to Venric Mark last year, and it's good to see it working even when Mark is out of the game.

The other plays I want to look at didn't change the outcome of the game; that was decided in the first half. They do, however, show how small wrinkles can have big results.

Down 34-7 at the half, Syracuse was in a bad way no matter how you look at it. Still, after efficiently driving the length of the field on their opening drive, the Orange find themselves facing 1st and 10 from the Northwestern 16. Syracuse comes out in the shotgun, with 2 receivers and a tight end left and a single receiver right. NU, as usual, matches with a 4-2 front, with a linebacker (Collin Ellis, I think) walked out over the slot receiver. 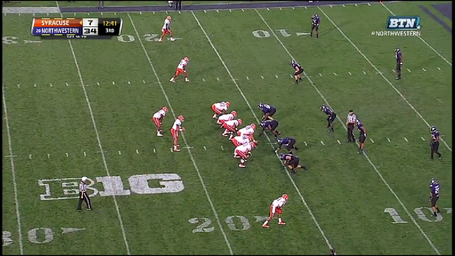 Syracuse calls a play with 4 options for the quarterback: the line and running back run inside zone to the right, the tight end releases straight upfield for a pop pass, the two receivers on the left set up a bubble screen, and the receiver on the right runs a quick (~5 yard) hitch route. These combined run-pass plays have become popular recently both in college and the NFL (if you watched Monday Night Football, you saw the Eagles running this exact play), for reasons this play should make obvious. 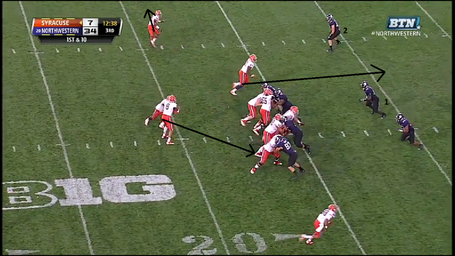 This sounds like a lot for the quarterback to handle, but here is how I think the reads work. Presnap, the QB checks whether the receiver to the right should be open by alignment; if he doesn't like the look on that side, he will work the left. His first read is on the OLB to that side (Damien Proby, in this case). If the LB widens to cover the tight end, the QB will hand off to the running back. If the LB crashes the run (which, since the line is blocking for a run, should almost always happen), the QB pulls the ball and looks for the TE. If the defender over the slot squeezes that route, the bubble screen should be there; if he doesn't, the TE should be open. In this case, Proby attacks the run and the TE is open for an easy throw. 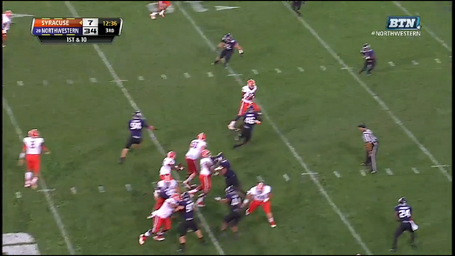 Proby probably should make the tackle, but he can't get there; the TE is hit at the 4, but he manages to reach the ball into the endzone. 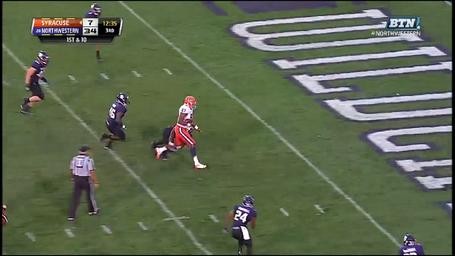 Syracuse had a lot of success on this play, mostly by hitting the tight end releasing straight upfield for the easy gain. It makes sense, then, that they go back to it in the fourth quarter. This time, there are 4 receivers instead of 3 receivers and a tight end, but the play is the same. Presnap, NU's alignment is the same as well, with a 4-2 front and the secondary well off the receivers. 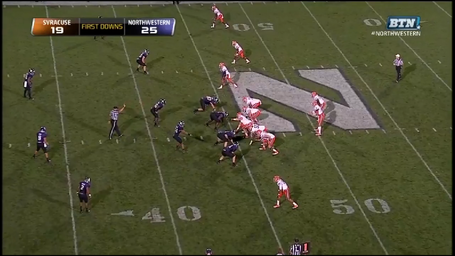 Presnap, Dean Lowry gets into a two-point stance at his right end position; this doesn't phase Drew Allen, who sees the single receiver left, running a 5-yard out route, getting 10 yards of cushion from a corner starting for the first time. Allen likes his chances. 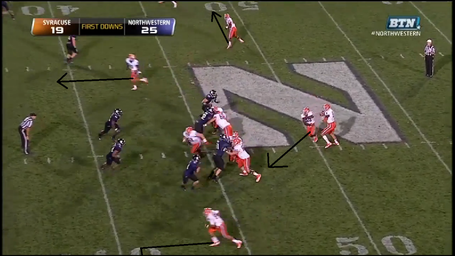 The inside receiver on the right is wide-open again as the linebackers attack the run, but Allen's eyes are on the left the whole time. Lowry, however, has dropped back into coverage and reads the throw perfectly. 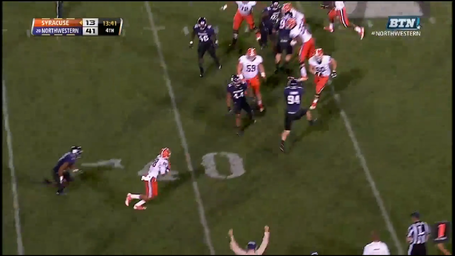 Allen's throw never has a chance, and Lowry manages to avoid the OT trying to tackle him. Also worth noting is how quickly Dwight White has closed on the route; even if the ball gets past Lowry, this should only be a short gain. 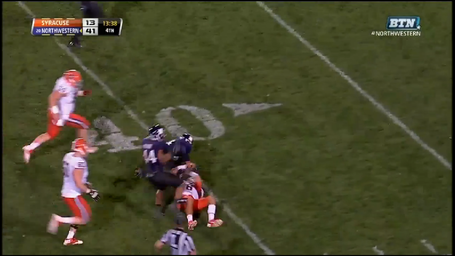 Dropping defensive ends into coverage is not a new thing for Northwestern's defense under Mike Hankwitz; rather, it is a common way of mixing up coverages by putting an unexpected defender in a short zone, where he can either come up with an interception when the quarterback fails to notice him or force the quarterback to hang in the pocket while NU's pass rushers work. As teams adjust to Northwestern's pass rush, getting linemen underneath quick throws should continue to be a profitable strategy.

It can be frustrating to watch quarterbacks work quick throws for cheap yards, especially when one of those throws results in a score. Still, I can live with conceding those throws as long as NU prevents big plays and turns a few of the quick throws into turnovers; it doesn't take many picks from 5-yard sideline routes to make them look unattractive to the offense.