Northwestern vs. Western Michigan: Three reasons to hate the Broncos

Introducing you to P.J. Fleck, the Miley Cyrus of coaches, who STOLE OUR THIRD-DOWN SONG DAMMIT, and getting mad about beer.

Share All sharing options for: Northwestern vs. Western Michigan: Three reasons to hate the Broncos

Do we really need to expend our effort on hating Western Michigan? Northwestern is favored by 30 damn points! Why bother mustering our most vicious emotions for a game where the scoreline shouldn't even be close.

So let's do this: here's why to hate Western Michigan.

P.J. Fleck and the Flecktones

Normally I've done seven reasons to hate opposing teams. I think P.J. Fleck safely accounts for reasons 1-5 to enjoy Western Michigan football most of the time and lustily mock the balls out of them one week a year. P.J. Fleck's method of reviving interest in WMU football is insane and hilarious, and he's trying so damn hard that I cannot help but feel for him.

Look, as Northwestern fans, we can appreciate this whole "32-year-old coach coming in and trying to reinvigorate a program," thing. Sometimes, a college needs a boot in the arse. But Fleck, a 32-year-old NIU grad who went quicky into coaching after a very brief NFL career, has a unique way of going about this.

First of all, let's get one thing clear: the team name is the "Western Michigan Broncos." But Fleck's motto for the team is "Row The Boat." Broncos cannot row boats. They have hooves. Even if you attached oars to their hooves, they would be ill-fitted for boat rowing, since their legs do not bend in the same way humans' arms do, and there's no good way to sit them in a boat sot hat they could row it, and since they're much heavier than humans, any canoe or kayak in which you placed them would almost certainly founder and sink. Fleck's irresponsible implication that broncos can row boats could lead a WMU fan to put a horse in a boat and kill that horse, along with any people in the boat, and I think that's dangerous.

But more importantly, Fleck is really going over the top with this. It's not just, like, a motto, like the team is saying it on the way out of the locker room. IT'S EVERYWHERE. 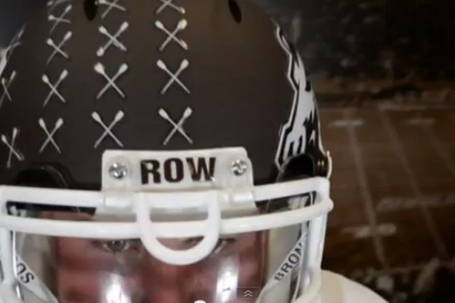 It's on his horseboat business cards: 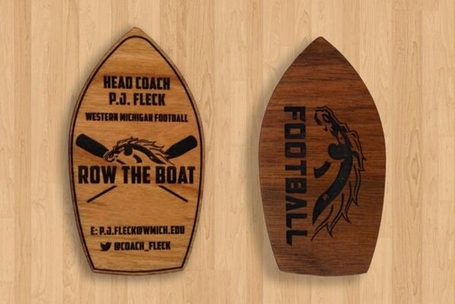 Just watch this video of Fleck's new proposed traditions for the Broncos:

It gets steadily worse and worse. EDSBS does a spectacular job breaking down the video part for part.

A DJ named "DJ Ill Mix" in the stadium Saturdays? Sure, I see what you're going for, get the youngin's involved, but, "DJ ILL MIX?" In what world is there an actual DJ named "DJ Ill Mix?" Those are clearly just the most two "young-person DJ" words anybody around the WMU offices could think of. "How did the procedure go, Dr. Successful Surgery?" It becomes clear later that Fleck doesn't really understand even the most basic DJ terminology, calling a record scratch a "spinoff" and a "remix" later in the video. But bless his soul for going on camera and trying to make these things sound reasonable.

Then we find out that Fleck wants to play "Chelsea Dagger" after his team's extra points. Okay, that's clearly the Blackhawks thing, but he says he's a Blackhawks fan, so I'll allow it, mainly because hahahahaha every one of his fans hates him now. Then, he says the Broncos have a new third down song, and...

THAT'S OUR THIRD DOWN SONG, FLECK

SURE, IT'S PROBABLY THE LEAST WELL-KNOWN TRADITION IN THE HISTORY OF THE WORLD, BUT WE PLAY THAT METALLICA SONG ON THIRD DOWNS AND YOU'LL PRY IT FROM OUR COLD DEAD BELL-TOLLIN HANDS. THIS IS THE WORST EXAMPLE OF THEFT SINCE WHEN ALL THOSE PEOPLE USED NAPSTER TO STEAL THAT ONE GUY FROM METALLICA'S MUSIC.

I don't have a problem with Fleck's attempt to create a new identity. It just seems like he's trying way, way, way, way too hard. Take it easy, man. You ain't gotta force traditions. They just kind happen.

Until they do, though, we have this .GIF:

He is, in fact, the Miley Cyrus of coaches: thrust into the spotlight far too young, and now seizing the opportunity to show he's capable of making decisions for himself by making extremely bad decisions and banking way to hard on over-the-top dance moves.

(Note: The comments bring us the story behind Row The Boat, which is heartbreaking and reminds us that however much we want to, we cannot actually hate P.J. Fleck.)

Michigan, for some reason, is up there in craft breweries per capita. I'm particularly partial to Founders, notably the Dirty Bastard.

Located in Kalamazoo is Bell's, with the initial brewery and an attached brewpub. Bell's has some very solid year-round beers, but saves its two best effort for seasonal runs: Oberon Ale, for the summer, and Hopslam, which, even as somebody who doesn't like IPA's, is pretty magical.

If I still lived in Chicago, I probably wouldn't have that big a problem with Bell's being in Kalamazoo. Many fine Bell's products were available just a walk away from my Evanston abode at D&D's.

But Bell's only distributes beer to 14 states. New York is not one of them. Sure, I could enjoy the fact that New York has oodles and oodles of other craft beverages available -- even though I live out here in the hood, there's a damn beer-only store with 18 taps and 100 bottles a ten minute walk from my house, --  but it's my right to be salty about the one company I can't have. It's an outrage that 'Zoo residents can access this beer 12 months a year while I am abandoned.

The Broncos actually have a nice athletic list of alumni: Greg Jennings, Jason Babin, Tony Scheffler stand out as current NFL-ers, baseball legend -- mainly for his writing -- Jim Bouton, and even a dude who just kiiiiinda participated in the Blackhawks' championship run, Jamal Mayers, let's focus on their most evil alumnus by far: Tim Allen.

Perhaps it's because Home Improvement was not a show I watched and was off the air by the time I turned ten, so it's not really a defining part of my life, but I generally see Allen as this middle-aged-and-older extremely boring dude whose main comical ploy is that he's somewhat boring and then funny things happen to him. Am I misplaying that? Making a family-friendly movie here and there is alright, but, this is dude's wheelhouse. That's what he lives for. Christmas with the Kranks 4 and The Shaggy Dog and stuff like that.

He's a step up from Haakon, tho.

Northwestern vs. Western Michigan: No. 16 Wildcats can breathe easy