Plays of the Week: Room for Improvement

Share All sharing options for: Plays of the Week: Room for Improvement

Since I am about to start talking about how Northwestern could have started strong against Western Michigan, I want to say up front that the Broncos, especially their defense, were ready to play at the starting whistle. They were far more effective on the lines than I expected, and PJ Fleck and his team deserve credit for leaving everything on the field.

Northwestern did, however, make some mistakes that prevented any of their first three drives, all of which started inside Western Michigan territory, from producing points. 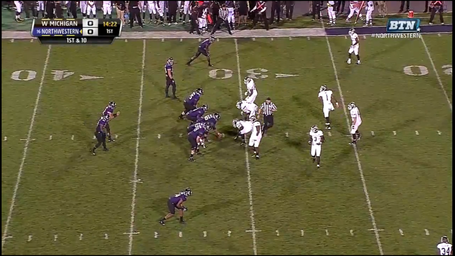 Mick McCall dials up one of Northwestern's core pass concepts, smash. On the left side of the formation, Dan Vitale is the inside receiver, tasked with running a corner route to threaten the deep sideline. Outside him, Rashad Lawrence runs a 5-yard hitch to draw the defense up or provide an easy completion. The basic read is simple: if the corner drops deep, Colter should throw to Lawrence; if he stays short, the ball goes to Vitale. 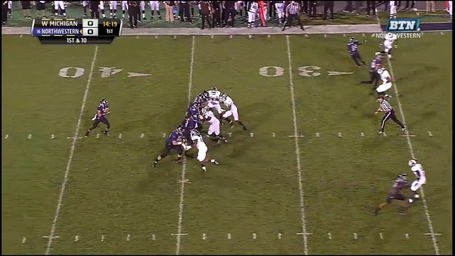 At the snap, WMU's middle linebacker takes off for the deep middle of the field; this suggests that they are in Tampa-2 coverage, with the safeties and middle linebacker responsible for the deep zones. The corner, recognizing that there will be a corner route behind him, also drops deep, leaving Lawrence open for a short gain. Colter, however, decides to try for the deep ball. 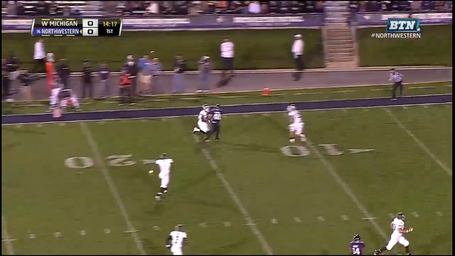 With the corner under the route, Vitale isn't going to make a catch. To make matters worse, Colter's throw sails long and hangs in the air long enough for the safety to come over and make an interception.

This is a simple missed read, compounded by a poor throw and a great play in coverage. If Colter goes underneath to Lawrence, Northwestern should pick up a few yards and be in good position to score; instead, Western Michigan's defense bails out their kickoff team.

After a pair of ineffective Colter drives (INT, -18 yards and a punt), Northwestern turned to Trevor Siemian to spark some offense. The first play goes well, picking up 18 yards when Christian Jones shakes off a tackler. On the ensuing first down, NU comes out in a 2x2 shotgun formation again. Once again, WMU keeps two safeties deep. 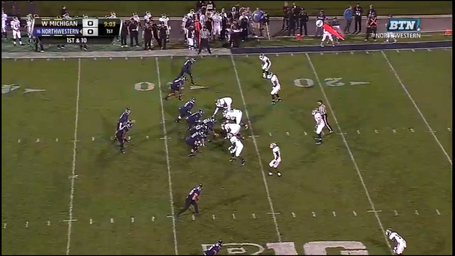 This time, Northwestern dials up 4-verticals in a bid to score on this play. 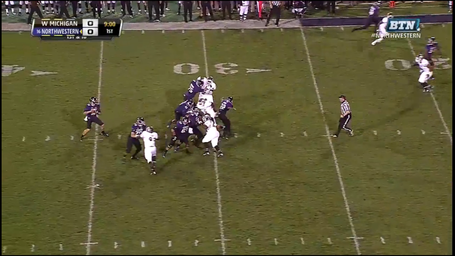 The protection is good, and both receivers on the left side get good releases. Siemian decides to throw to the inside receiver, Christian Jones, heading down the seam. 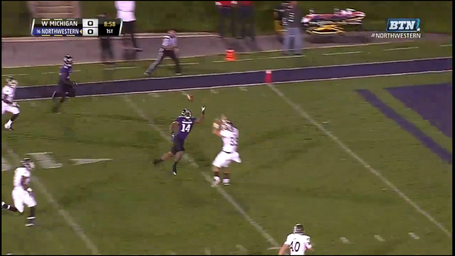 Siemian probably could have completed this pass, but as with Colter's interception the throw is a bit too far down the field, allowing the safety to break it up. The better throw, however, appears to be to Cameron Dickerson on the outside, a throw that might have instantly put NU up 7-0; instead, Jeff Budzien would miss a field goal and Western Michigan would take the lead on the ensuing possession.

The bottom line about Saturday is that Northwestern won by 21 without showing a ton of life on either side of the ball; considering what recent letdown games have looked like (a loss at Army in 2011, allowing BC to hang around at home last year), that result is acceptable. Considering how bad Michigan and Nebraska looked, that letdown might have pushed Northwestern into the front of the Legends Division race; football is strange sometimes. Hopefully the team comes out more focused against Maine and can earn an easy victory while working out some of the issues that the first three games have revealed. Ohio State comes to town on October 5, and NU will need to be firing on all cylinders to come away with the win.

Northwestern vs. Western Michigan: No. 16 Wildcats can breathe easy