Plays of the Week: Running Away With It

Share All sharing options for: Plays of the Week: Running Away With It

Big news: thanks to Glopknar, we now have GIFs of each play following my discussion.

Northwestern finished the season opener against Cal with 40 rushes for 209 yards and a healthy 5.2 YPC average. Pulling out quarterback runs, which were mostly (though not quite entirely) scrambles, NU ran the ball 33 times for 186 yards (5.6 YPC). Yet for much of the game, the NU run game was a nonfactor: 4 plays accounted for 136 of those rushing yards, while the other 29 only gained 50 yards. One of those runs, a 33 yard touchdown, finished the first drive, while two more came on back-to-back plays on the final Northwestern drive. The fourth, Venric Mark's most notable contribution in the game, came in the third quarter.

Let's start at the beginning. After Cal opened scoring with a fake field goal, Northwestern took only 4 plays to move the ball from the Northwestern 25 to the Cal 33. Northwestern lines up in a pistol formation with two receivers to the left and one to the right; Dan Vitale is the h-back on the left. Cal lines up in a 4-2 defense with the safeties deep; with six defenders in the box against six blockers, they need one of those safeties to fill a gap in the run game. Since a cornerback is showing press coverage against the lone receiver right, the most likely candidate is the safety on the offense's right. 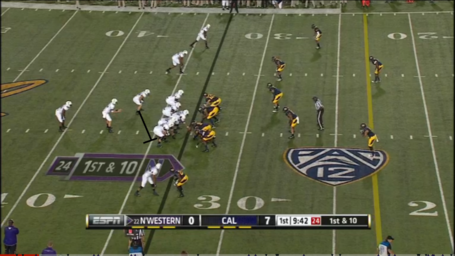 Northwestern runs inside zone with a slice block; that means that the offensive line works to their left, trying to drive defenders back and outside, while Vitale comes across the formation to the right to block the backside defensive end. While the announcers talk about option defense after the play, there is no option for Siemian to keep; this is straight-up power football. The receivers on the left do set up a screen, but Cal has plenty of defenders out there to discourage the throw.

The Northwestern line doesn't get much movement. Jack Konopka merely holds his ground on the left, while Brandon Vitabile and Geoff Mogus move the nose tackle back a bit with a double team before Mogus peels off. On the backside, Ian Park and Paul Jorgensen double team the other defensive tackle; they do eventually get him under control and allow Park to get to the second level, but he manages to squeeze the hole before this happens. With a safety attacking the right side of the offense and both linebackers still unblocked, Cal is in pretty good shape. 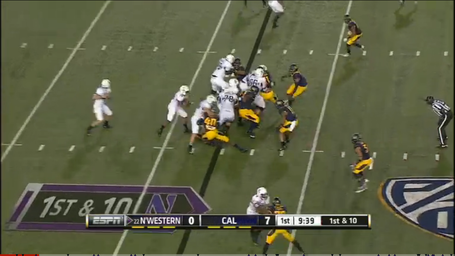 Both defensive tackles manage to spin off their blocks, but they are too late to get a hand on Green. The linebacker on Northwestern's left scrapes into the hole, leaving Geoff Mogus without anyone to block, but Ian Park makes the block. Meanwhile, Paul Jorgensen, having lost his man, keeps moving forward and hits the other linebacker. Green bursts through the traffic and heads for the endzone. Somehow, this happens while both defensive tackles have shed their blocks and two offensive linemen are blocking each other. 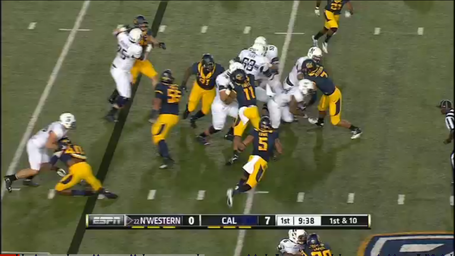 The TV had a nice endzone replay that shows a lot more of the play. As Green receives the handoff, there is already a gap developing between the right guard and center. Notice how far outside the safety (#5) is, while the Cal LBs are also filling outside gaps, leaving an A-gap unmanned. 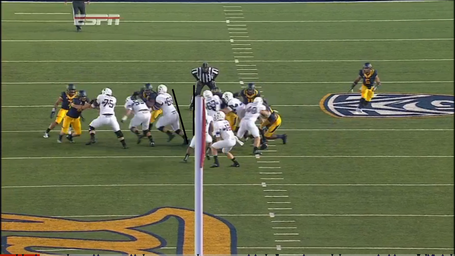 Green actually ends up in the backside B-gap (between the guard and tackle). 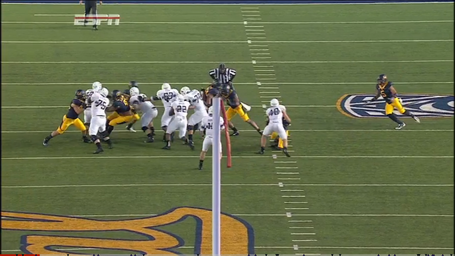 You can see the linebacker on the offense's left trying to get back inside, but Ian Park is coming for him. This leaves Mogus without anyone to block, but that doesn't matter because Cal has 4 defenders (a defensive tackle, defensive end, linebacker, and safety) in two backside gaps. With three defenders accounted for by the receivers on the left and one more by the lone receiver right, that leaves only 3 defenders to face 4 blockers. When Park hits the linebacker, Green has his lane to the endzone.

The first play was a testament to effort and sloppy defense more than dominant Northwestern blocking. Cal starts the play outnumbered in the box, and the safety the bring down is too far outside to help with the inside run. He is in position to prevent Green from taking the run outside on the right, but the rest of the defense fails to plug the inside gapes. Northwestern's line did enough to pick up a few yards, and Green read his blocks well, but the defense should have done better.

The next play came in the third quarter, with Northwestern leading 17-10. On third and 1, Northwestern lines up with Tim Hanrahan as a fullback to Siemian's left and Dan Vitale as a tight end on the same side. Presnap, Christian Jones motions in from the slot, ending up on the right side of the formation. Cal puts 9 in the box, looking for an inside run; the deep safety is probably responsible if Jones runs a pass route. 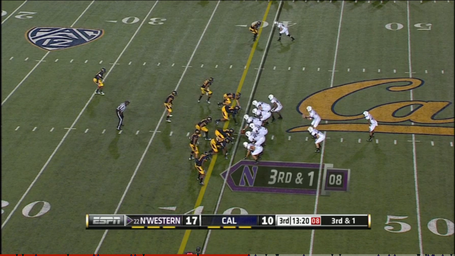 Northwestern runs Power to the left, with Ian Park pulling to the left and Tim Hanrahan heading the same direction while the left side of the line seals the defense inside. 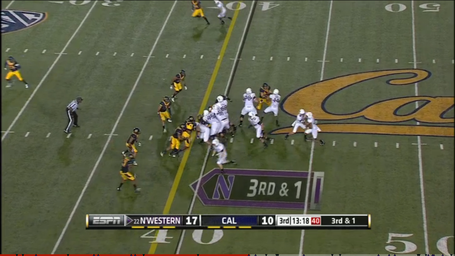 Cal has the numbers to stop the play; there are three Cal defenders outside of Vitale with only Park and Hanrahan available as blockers, with another linebacker scraping in that direction. 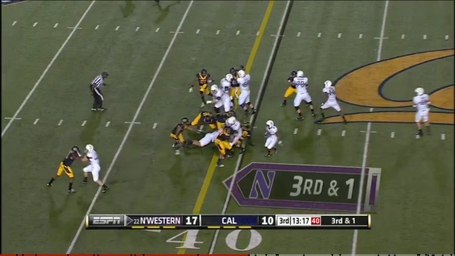 Those defenders must stop any inside cut first, however, and nobody maintains good outside leverage on Mark. This, combined with Hanrahan's defender retreating, allows Mark to bounce the run outside. 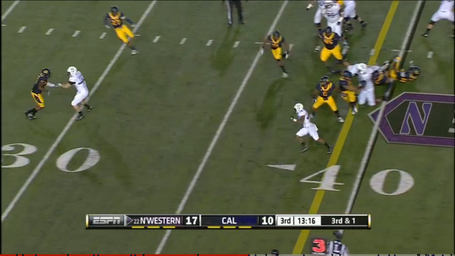 Cal's leverage on the play was bad, but it isn't clear to me who was supposed to contain Mark. The defender Hanrahan blocks is probably responsible for any vertical receiving threat on that side, which would explain why he retreats so quickly. If this is the case, one of the other defenders should replace him as the outside run defender; containing runs to the outside and defending the tight end or fullback releasing vertical at the same time is a no-win assignment. Mark's cut looked really sharp, and the line did fairly well on their blocks. Once again, though, Northwestern took advantage of Cal being out of position.

On the second play of that drive, Northwestern lines up with Green and Vitale in the backfield, motioning Christian Jones from the left slot to the right slot. Cal's defense shifts, dropping a man out of the box. 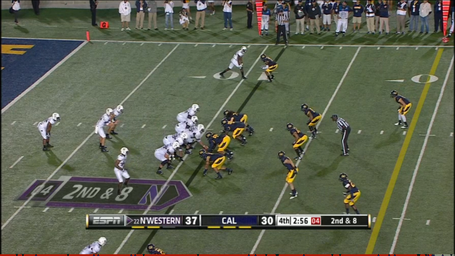 Northwestern runs essentially the same play as the first Green run, with Vitale blocking the defensive end on the offense's left while the line blocks inside zone right. 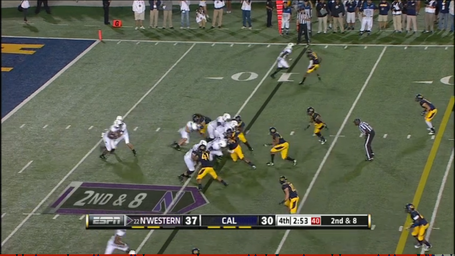 Cal defensive tackle Gabe King splits a double team and gets great penetration, forcing Green to bounce to his right. Cal has a free defender, #10 Lucas King, there, but he is moving inside and must reverse direction to attempt and arm tackle. Green shrugs the attempt off and is off to the races. 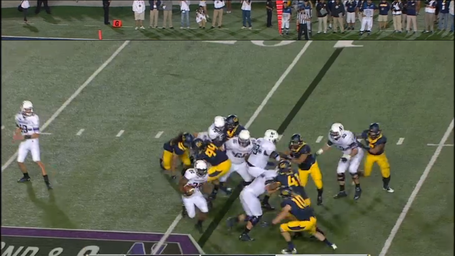 Like the Mark run, Cal's problem here is poor leverage; the interior defenders, led by Gabe King, do a great job of plugging the interior gaps. Lucas King, however, loses the outside leverage that would allow him to make the tackle and none of his teammates replace him. Green does well to recognize and exploit the situation, but once again the offensive line has problems dealing with Cal's defensive tackles.

For the next play, Northwestern replaces Green with Mike Trumpy. NU goes with another slice play, this time with Trumpy slightly offset in the backfield. 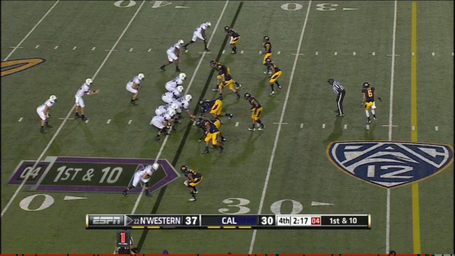 The left side of the line, instead of driving off the ball, focuses on moving defenders to the left, even as they allow significant penetration. On the right, Ian Park is able to get to the second level. 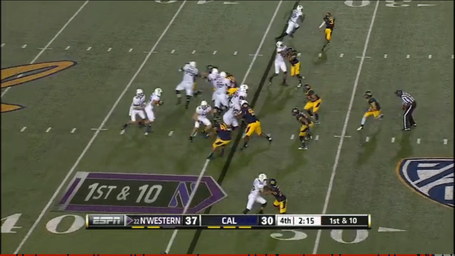 This is, arguably, the best blocked of these four runs; NU has a hat on a hat and all the penetration is going in a not-terribly-productive direction. Still, the seam Trumpy hits is small and not very far downfield. 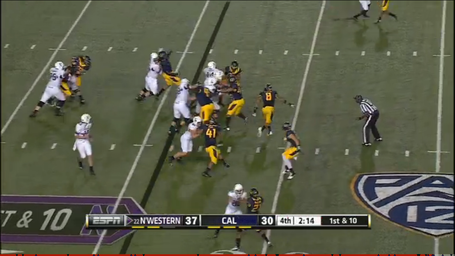 When Trumpy gets through, another Cal defender, Michael Barton, is right there to clean up the play. 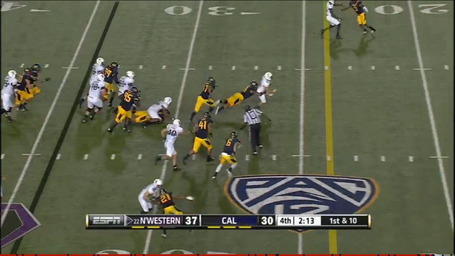 Trumpy just runs through the attempt. It slows him down enough to allow Hardy Nickerson to catch up easily, but Trumpy still manages to set up 1st and goal.

There are both reasons for concern and reasons for optimism. Throughout the game, Northwestern's line struggled to control defenders, and the blocking of these plays wasn't exceptional. Indeed, on Green's run, allowing a double-teamed defensive tackle into the backfield was downright disastrous. The running backs, however, showed good vision and were able to make the defense pay when they were out of position or, in Trumpy's case, to simply break a tackle and extend the run.

My main question going forward is whether the line will improve. Last year, a disastrous day against Syracuse led to a change at right guard, and the line improved dramatically as the season went on. The depth chart for week 2 has the same 5 starters listed, so at least for the moment the plan is to stick with the same personnel. We will see whether they can tighten up their play.