Who will ESPN choose to represent Northwestern's fanbase? Early indicators seem to show that it will not be me -- our guesses on who else it might be.

Northwestern vs. Ohio State will be the host of GameDay. This is great, until you remember that it means ESPN will delve into the depths of Northwestern's alumni base and pick one person and use them as the new indelible image of Northwestern's fanbase. (Although, to be fair, I suppose most images of our fanbase are better than this guy or this guy.)

We love all Northwestern's famous alumni. It's just... I have this nagging suspicion that whoever GameDay chooses, it will be the person we somehow all agree least represents us as a fanbase. I'm not sure who this will be, but somehow, they'll find it, and they'll exist.

When Northwestern hosted GameDay at Wrigley, the show brought in Mike Ditka -- you know, because Chicago's Big Ten Team: 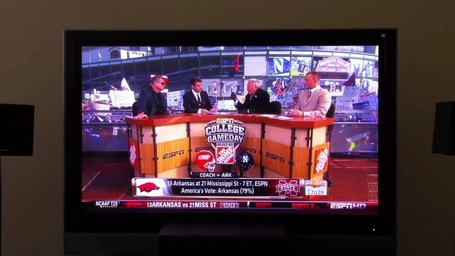 But I'm thinking with GameDay actually in Evanston this time around, it'll be a Northwestern person and not just a random Chicago person.

Let's hit the odds! I don't know how odds work, BTW. Are they supposed to add up in any way? (Also, watch them pick somebody not on this list.)

The odds are overwhelming that ESPN brings in somebody from ESPN to do this. In part because Northwestern is Northwestern and I think 97.35 percent of people that work at ESPN attended Northwestern, and in part because ESPN is a huge fan of self-promoting. I mean, they're a TV network, it's their job. I doubt ESPN would reach out to a non-ESPN person (the Rachel Nicholses of the world) although there are obviously plenty of those.

Let's break down the options:

I think Wilbon has to be the odds-on favorite. He's the guy on ESPN's best and most prominent SportsYelling show, he's Northwestern's most rah-rah ESPN ambassador what with the helmet on his desk or anything, and he will take any opportunity possible to hype up the Cats. He's been NU's commencement speaker and spoke and my Medill convocation, and chances are he's already going to be in Evanston. This is the path of least resistance.

Greenie's already prominently featured in Northwestern's weekend -- he's the marshal of the homecoming parade and will be broadcasting from Deering Field Friday -- so he's in the loop. Another easy opportunity for ESPN to get a popular dude from one of their shows on another one of their shows.

Adande isn't the host of his own show, just a guy from Around the Horn, so he's basically persona non grata in terms of GameDay guest picking potential. He was the Homecoming Marshal last year, so his shot at GameDay is perhaps a year too late.

All picks decided by which school has the highest per-fan revenue at their stadium.

He's busy with his own stuff on Saturdays, since he has to announce the dang games, but perhaps since NU is his alma mater, he'll make an appearance on the other show.

Going progressively deeper down the list of Around the Horn personalities, here.

I don't watch Scrubs and never did, but I could totally see them being like "You know what we need? The guy from Scrubs" and just running with it to personally disappoint me. I feel like Zach Braff is Northwestern's 18th-most famous alumnus, but or some reason always comes up in the top three or four of conversations when discussing people who went to Northwestern, right next to Julia Louis-Dreyfus.

ESPN turned to a golfer-type last week with Bubba Watson. Donald is also a golfer type, but more British. I think ESPN opts to avoid going back-to-back on golfers and avoids having somebody with an accent that could scare off football fans.

Definitely OUR top choice here. Colbert comes out in character, represents America, busts out reasons why every team besides Northwestern should be on notice and picks the Cats as the crowd goes wild. Problems: his character went to Dartmouth, and I sorta doubt ESPN can convince him to come out to Chicago for a football game. Fingers crossed so hard.

Whenever College GameDay needs him, in the spur of the moment, Chesney is ready to be a fan of any team's fanbase. A 25-minute crash course on Northwestern football history and a quick tour of campus and Chesney can be ours.

Went to Northwestern to learn about dancing, but we don't mention that when claiming Chicago's cussin', nine-finger havin' mayor. Would really hammer home the CHICAGO'S BIG TEN TEAM thing, but bringing politics into the equation probably is a non-starter for ESPN.

Game of Thrones and football don't have a huge crossover audience, but, hey, it's only been one week since GameDay brought in a bearded guy best associated with a TV show popular amongst a huge cult of people I try not to hang out with, so they could dip into that well again. I highly doubt Martin knows anything about football, and besides, he shouldn't be allowed out of his house until he's finished with those damn books. Hurry up.

Breaking Bad ended last night, and nothing could be more topical than bringing in one of the show's stars a week later. But a) I didn't know she was a Northwestern alum until last week b) I'm not sure she knows/likes/wants to be involved with football c) football fans would probably just be huge jerks to her. Also, I still have "watching Breaking Bad" in my list of things to do when I have 50-ish hours of my time and have avoided spoilers (not that I would know what they mean) so maybe something really bad happens to her in the last episode and this would be an awful idea? I don't know.

Meyers is hilarious, loves the Cats, and is fun and popular. Problem: he's on Saturday Night Live, which sorta doesn't jibe with college football, seeing as, you know, SATURDAY. ESPN will need some quick transit to pull this one off, and it would just be mean to bring Seth to Evanston and not let him watch the game

ESPN could always bring in Seth's younger brother, Josh, who also went to NU and was on MadTV for a long time, but I'm not seeing it happening for some reason. Odds: 2000-1.

Would distract everybody from talk of whether or not he's gonna come back to the Yankees.

Would be spectacular, but nobody outside of Northwestern knows who he is.

Hef never graduated, and neither he nor the university talks much about his time here. But Playboy has long been noted for their cogent college football analysis randomly interspersed with semi-nude chicks. Bring him on the show and show the world Northwestern knows how to party: with creepy old dudes and decades-old perspectives on gender relations.

Stevens proved his decision-making ability in 34 years on the Supreme Court. He's not busy anymore, so surely he'll hop down to his former law school and make some picks. 93 years young!

How can GameDay pass up the opportunity to win the labor economist and NU faculty member who won the 2010 Nobel for their analysis of markets with search frictions?

Almost certain to be attending Northwestern next quarter, per College ACB in 2009.

Dead, but ESPN has done crazier.

This would probably be a bad look.

COME ON GUYS I'M A FULL-TIME JOURNALIST/BELOVED SPORTS PERSONALITY FOR SB NATION. CAN I AT LEAST GET BETTER ODDS THAN THE NAZI DUDE