I KNOW. YOU WANT TO TALK ABOUT SYRACUSE. We'll do that later. But for now we noticed a bunch of interesting stuff on our rewatch of Northwestern's first game. Here it is!

Okay, one last Cal-related post before we go full steam ahead with a whole buncha Syracuse stuff today: I finally got around to finishing my rewatch of NU-Cal Wednesday morning (will try to do this by Mondays, but stuff happens!) The point of the rewatch is less to capture big ol' things and more to capture stuff I might not have noticed the first time. Let's try:

- I'm not sure if this was just a thing to cope with Cal's multi-WR sets and an up-tempo offense that required a lot of LB subs, but I was really intrigued to see how frequently Jimmy Hall lined up as a third linebacker rather than a replacement for Traveon Henry. We've noted how he's sort of a linebacker-safety hybrid, and NU seemed interested in exploiting that Saturday. It doesn't show up on the scoresheet -- he only had two tackles, NU's starting linebackers had eight or were Collin Ellis -- but I think NU felt Hall had the speed to stick with wideouts and blitz that a third LB might not have.

- I didn't need a rewatch to tell you this, but man, Northwestern might be in trouble with Dwight White.

Nick VanHoose didn't have a great game -- notably, he gets jumped over on Chris Harper's second TD touchdown, gives up some first down routes along the sideline -- but had a pass deflection and was very good at getting up to stop lateral plays, with 1.5 tackles for loss.

On the other hand, Jared Goff was ruthless in targeting White, and extremely effective. I had been keeping a tally of plays where White was, in my mind, burnt, and it stops at five, although I don't know when my notes switch from just marking awful plays using the tally and when I started describing the poor plays he made in words because I was so fascinated. He ended up with seven tackles, which doesn't include the touchdown and plays where somebody else had to make the stop, and doesn't include an end-of-first-half pass to Bryce Treggs that could have been a TD if Goff's throw was on the money. After getting really crisped by Harper on the 52-yard TD, he begins playing exceptionally far off the line of scrimmage, which kept the deep ball out of play by limiting Cal to 8-12 yard passes on his side, but this still isn't good.

As a 23-year-old, I hate to pick on a kid playing in his first college game... but if opposing quarterbacks are going to do it, shouldn't I?

What's really surprising to me, and I noted this before the season, is that NU seems to line up Ibraheim Campbell almost exclusively on the side Nick VanHoose is playing. Campbell's a great pass defender for a safety, and it seems like a waste to leave him on the side where passes won't be going most of the time, although this did pay off when Campbell picked off a pass intended for VanHoose's man late. Traveon Henry seems more talented at stepping up and stopping the run, and did so nicely. If Campbell's the best player at stopping deep balls from turning into touchdowns, shouldn't he be alongside White?

- So you have to die your hair blonde if you play at Cal? Really disturbing stuff uncovered on the replay.

- I already praised Collin Ellis, but, wow, what a game. With the Bear Raid he was back in coverage a lot, and did a spectacular job sticking with running backs and third/fourth wide receivers. He gives up one pass for a first down in the fourth quarter, but generally doesn't allow speedy guys in the middle of the field to beat him, and does a phenomenal job coming up to bust screens and short routes. His first pick was being in the right place at the right time, his second pick he was ready to tackle his receiver for a loss or short gain, and he also drills running back Brendan Bigelow trying to catch in the backfield, wrestles him down on a run to the outside one other time, and deflects a pass while dropped into zone coverage that nearly ended up a Nick VanHoose pick. Truly all-around play.

- You can also find this in detail in the plays of the week post, but I was very impressed with two of Treyvon Green's traits: his ability to keep the pile moving, and his winding of running. His strength was evident on plays he was hit and kept pushing, but what impressed me was how several of his better plays, he nearly comes to a stop and waiiiiiiiits with his body off balance to squeeze through a tiny hole. I could really see Green being helpful running between the tackles all year long.

Mark, on the other hand, obviously does his best work outside of the tackles, and it just wasn't there Saturday. When faced with defenders, he tried to rely on his speed to go horizontal, but the speed wasn't there, and he often ended up going sideways or backwards without ever beating his defender and took losses. The clearest sign Mark wasn't up-to-speed, literally? Siemian actually ran the option to perfection and pitched the ball to him on second-and-goal from the two to give Mark the option to beat just one defender on the outside, but Cal's Stefan McClure caught up to him from behind to stop him for no gain. Normal Venric just would've had an easy score running sideways two yards from paydirt.

Rather read about Northwestern vs. Syracuse? 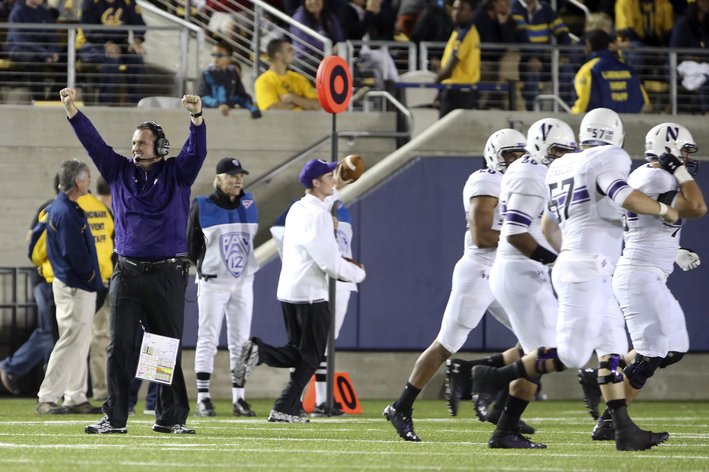 Here's our stream for info on Orange-Wildcats, including updates on Kain Colter's health.

Mike Trumpy on the other hand seems to be the back on third downs 100 percent of the time and very occasionally on other downs, so that's his role if you're curious. I'd imagine he's far and away better than anybody else in pass protection.

- Cal was successful with the same play over and over again on the first drive: a zone read look out of the shotgun that led to Brendan Bigelow running left or right at full speed before cutting upfield. It becomes less of an issue later in part because of great play by Northwestern's LB's, but also because Cal just decides to give it up considering how often they could find White's man open for big gains.

- You're gonna get the good and the bad with Trevor. Again,the best place to look is our charting/metrics breakdown, but he made these obscenely pretty throws like the touchdown to Tony Jones and a variety of third-and-long type strikes, but also threw two incredibly stupid balls with a few minutes left in the game. Up seven with about four minutes left, he had back-to-back deep balls, one to Tony Jones down the middle that ended up a jump ball deflected, but could've been caught by Kamero Jackson, the other one that actually was intercepted by Alex Logan in double coverage down the sideline. On the one hand, it's nice to see NU avoiding conservative play up a score, but punting is very conservative, and those throws were nothing if not armpunts.

- I'll probably write about this again in future with screencaps, but Northwestern really utilizes a lot of interesting packages and banks a lot on the versatility of players. I was surprised to see some diamond-type plays like the one Cal uses as a near-base set. In past we'd seen a whole ton of NU operating out of a two-back pistol-like set with one running back behind the QB and one next to the QB, but we saw even more of that than usual Saturday, with the additional three-back set with running backs on both sides.

And it's interesting to see where NU asks players to line up: Malin Jones was often split out wide often motion out of these pistol-type sets to become a pseudo-tight end (with rather mixed success) and Mike Trumpy actually ended up at wide receiver on some third-down plays although he'd generally end up motioning into the backfield. Even if a player isn't best suited for a certain role -- Jones blocking, Trumpy receiving out wide -- they still have a certain skill set and the element of surprise probably makes up for their deficiency.

I think these sets will be infinitely more successful with Kain Colter, as they play much more to run than to pass.

- Left out of that last bit: Dan Vitale lines up, well, everywhere. What a game from him -- truly Dunsmore 2.0.

- NU once again has a three-man passing down rush package featuring Tyler Scott as the defensive tackle and Ifeadi Odenigbo and Deonte Gibson as the defensive ends. It led to one sack where Mark Jones identified Odenigbo as IFADI ABONOBO, but you could argue it was responsible for Cal's late field goal in the second quarter -- Jared Goff had tons of time in the pocket and hit his checkdown after coverage closed off deep routes, allowing a first down.

- We can talk about the flukiness of NU's two deflected pick-sixes, but the truth is Northwestern was tipping balls at the game all night. Tyler Scott, Dean Lowry, and others were menacing on the pass rush and got their hands up if they weren't close, and that leads to balls not going where they're supposed to, and that leads to chaos, and chaos is what you're trying to cause as a defense, right? 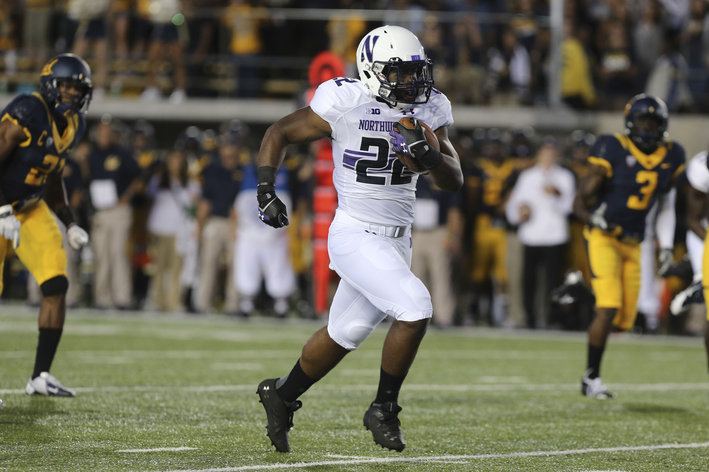 Our Plays of the Week feature focuses on how the ground game got working against Cal.

- On the other hand, a pair of real bummers for Cal: I hadn't noticed VanHoose's fourth quarter hit actually put Brendan Bigelow out of the game, but at that point Cal was exclusively passing, so I don't think it was as big a loss as Venric Mark's injury. And the ejection on Chris McCain.... let's just say it's no surprise there was a 53-yard pass completion the very next play.

- Yo, let's get Venric Mark running back kicks? I had completely forgotten about Stephen Buckley's WHOOPSIES fumble on one of the kickoffs. Hopefully just first game jitters.

- Northwestern's short-yardage set: Christian Jones wide, Dan Vitale and Mark Szott as true tight ends, Tim Hanrahan as the upback next to the QB. No converted offensive or defensive linemen, as has been typical, since Szott seems to have the right skillset for that role. It wasn't particularly effective with Siemian under center, although Hanrahan did lay some nice blocks.

- On the "injuries" thing: worth noting that NU's first cramping issue came after a holding penalty, but all the rest were after clock-still-moving situations. Also worth noting that although NU struggled mightily with substitution issues on the first drive, one play where a defensive tackle is still scrambling on the field at the snap, I don't recall seeing any speed-related issues the rest of the game.

- Saturday was really a phenomenal game by Cal's punter Cole Leininger -- besides a #PUNTTOWIN by Sonny Dykes taking a five-yard penalty on fourth-and-three at the 40-something to set up an 11-yard punt -- with NU taking the ball on their own three-yard line twice. It's another situation where Colter can be helpful as dropbacks aren't good around the end zone, and NU showed it on a three-and-out the first time. (The second time was the ejection play.)

Brandon Williams also had a great game with three of his four punts inside the ten.

- True freshman Jayme Taylor was listed in the participation notes. I imagine this was an error -- looked for him, but did not see him. Almost every uniform number looks like "88."