Northwestern vs. Syracuse: What to look for as the Wildcats take on the Orange

Will freshman corner Dwight White be alright against Syracuse's passing game after a rough debut? And how can Northwestern move the ball against a Scott Shafer-designed defense that shut down Penn State (with a few notable exceptions)

Share All sharing options for: Northwestern vs. Syracuse: What to look for as the Wildcats take on the Orange

All week, we've kinda talked vaguely about Syracuse's football team when talking about Northwestern's upcoming game against Syracuse. Well, guess what, losers! It's finally time to analyze them in depth, and talk about what Northwestern should actually expect on the field Saturday! (Normally, I'll try to do these earlier in the week, sorry. But at least this provides some decent Friday pre-game reading and u can sound smartz 2morro.)

Northwestern is the No. 19 team in the country! Syracuse is 0-1 after an ugly 23-17 loss to Penn State :( But that doesn't mean we should discount them, especially not after a 42-41 game between these squads last year. Let's find some other reasons for you to discount them!

I'm going to let Syracuse fans do the talking here:

What was your biggest concern coming out of Syracuse's first game with Penn State?

AP: My biggest concern is this offense's direction. The pistol looked awful. Drew Allen looked like he was guessing out there. The wideouts couldn't get open. The offensive line wasn't able to open many holes. At the end of the day Ashton Broyld's comments sum it up: it's going to take time for the offense to gell. It's going to take time for the coaching staff to water things down and figure out what works. So essentially, this is going to be an issue every week.

TIS: George McDonald. Much of the focus has been on Drew Allen's performance, but for me, the formations, schemes and play calling suggested that we really didn't play to our strengths. I'll give George and the entire offense a pass following week one, but if we stick to that same plan against Northwestern, I'll start to get seriously concerned.

MM: Offense. The line didn't seem to open holes, or pass block very well, and the receivers didn't provide much separation. And that's not even taking into account Drew Allen. I wrote a column earlier in the week defending the Oklahoma transfer, but that doesn't mean I'm not concerned. I think he, along with the rest of the offense will eventually "get it," but we are clearly in a trial and error phase, which will cause more problems before things get better.

JS: The lack of organization by the coaching staff. To me, the biggest hiccup from SU was being unorganized and the feeling the offense was completely confused and lost at some points during the game. It is extremely tough to grade a quarterback's performance, if battling through play calls and organizing wide receivers at the same time. However, all of that can be first-game hiccups with a new HC, offensive coordinator, quarterback and young wide receiver. I think it is a fixable situation that everyone involved will eventually figure out.

SK: That this team is going to take too long to figure itself out. I'm concerned that because it's such a work in progress, the offense might never gel and they'll be too much pressure on the defense for them to handle. We really need to use the Wagner and Tulane games to work out the kinks because after that, there aren't very many easy stretches.

JC: Offense... Christ. I was fine with the whole "closed practice" thing last season, since it resulted in the hurry-up offense we installed early in the year. If you're going to try something interesting, closing practice is a great option, since it allows you to take your first opponent by surprise. But why would you close practice for what we saw on Saturday? Referring to the play-calling as "vanilla" would be putting it mildly. Penn State knew it right away, even without any hints as to what it might look like beforehand. Hopefully this is just a rough start before McDonald unveils the "real" offense.

Yeah, there are worries about Syracuse's offense.

You may remember last year, Ryan Nassib was Syracuse's quarterback, and he torchedNorthwestern's defense for 482 yards, with his only interception a complete fluke out of the hands of one of his receivers. Well, he's on the New York Giants right now, so no need to worry about him. Also, his top two targets, Marcus Sales and Alec Lemon are gone.

There was an open QB competition between Drew and Terrel Hunt, and Allen, a 6'5 senior slinger who spent his first two years at Oklahoma, won. 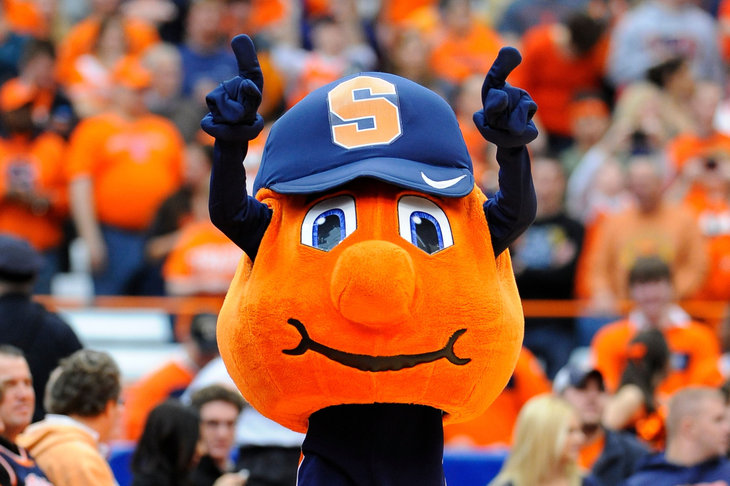 WE GOT REASONS TO HATE SYRACUSE.

In Game 1, Allen was BAD. It doesn't seem like many rational fans are calling for a replacement yet after he played his first meaningful snaps since high school in a hostile Meadowlands environment (technically a home game for 'Cuse, but, as we noted, Penn State is closer to New York than Syracuse), but, well, 16-for-37 with two interceptions is very bad. You're supposed to throw about half or more of your passes to players on your team, but Allen's breakdown went like 16 to his team, 19 to the ground, and two to the other team.

Part of me credits that to first-game jitters, too. But Allen is a senior now, and well, this is about as well as you'd expect a passing game tthat get completely dismantled to look like.

Needless to say, this is unbelievable news for Northwestern. After facing the Bear Raid and subjecting Dwight White to a trial by fire, the Wildcats face one of the worst passing teams in the country, statistically speaking after Week 1. All eyes will be on White as Syracuse presumably saw the game film and knows to attack him after attacking him worked over and over and over and over and over again for Cal after Daniel Jones' injury. He'll have a chance to shine -- or prove that this could be a long season.

As for their run game, one could have expected it to be good with name candidate Prince-Tyson Gulley and Jerome Smith coming back, as they combined for 2,001 yards and 12 touchdowns on 5.2 yards per carry last year, which are some really great numbers. But they weren't particularly great against PSU -- Smith was fine with 74 yards on 16 carries and two touchdowns, but Gulley had just 24 yards on 12 carries. When you include sacks, 'Cuse had 71 yards on 37 carries, just 1.9 per touch.

But I haven't been particularly worried about Northwestern's rushing defense, and after a few bad plays early against Cuse, they were able to keep Brendan Bigelow under wraps. If the front seven shines again like it did against Cal, I'm not worried about Smith and Gulley.

I think NU should be able to limit what's hypothetically Syracuse's strength -- running the ball -- so for me, the question is whether a Syracuse passing game that looked anemic i Week 1 can hurt NU at it's point of weakness: White. Despite my pessimism yesterday, I think he'll be more up to the challenge after a week, and think the rest of NU's defense can pull their weight enough to make this matchup manageable.

When we got the ball

All things told, Syracuse looked very, very solid on defense. After all, Scott Shafer is a defensive guy, known for his aggressive sets. His Orange defense held Bill O'Brien's offense to 1.5 yards per carry on the ground and limited freshman QB Christian Hackenberg to 173 yards on 29 of his passes, with two interceptions.

Of course, they might have been too aggressive: Hackenberg threw 31 passes, and the two not included up there were 54- and 51-yard touchdown passes. Those were Penn State's only two touchdowns, and cost 'Cuse the game.

Q-and-A with John U. Bacon 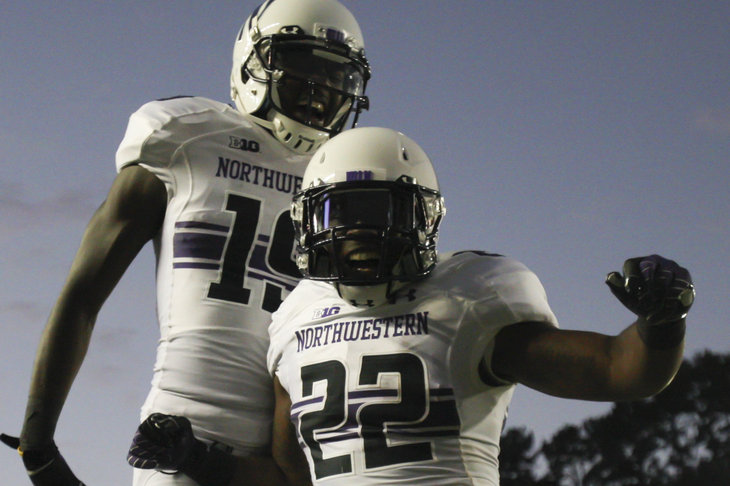 So what went wrong? The team's secondary coach chalked up one play to miscommunication and the other to poor technique. That isn't exactly a good sign for the Orange: they start three returning seniors in the secondary after losing only Shamarko Thomas to graduation, including Jeremi Wilkes, who was credited with the poor technique. This is supposed to be the strength for 'Cuse, not front end littered with losses. But looking at TNIAAM's breakdown, the touchdown which was chalked up to miscommunication certainly appears to have been a miscommunication error.

But there's more -- Black Shoe Diaries noted that Shafer's defense completely sold out to stop the run, often putting nine guys on the line of scrimmage with nobody more than seven yards deep. This apparently happened often, not just in likely run situations, and even when the Nittany Lions played spread-type formations with more wide receivers than players assigned to cover them. You can blame mental errors and poor form, but being highly aggressive puts guys in situations to make mistakes, and Hackenberg was able to exploit them. Perhaps Shafer was hoping his seniors would be perfect and overcommitted to helping out his younger line by packing in rushers, but the problem with expecting perfection is that if you're just very good, only making a few mistakes while otherwise remaining perfect, it's not good enough. That's what happened to Syracuse's secondary Saturday.

Whether or not Kain Colter and Venric Mark are healthy, I think this is once again Trevor Siemian's game. If Syracuse wants to sell out to limit plays in the backfield, they might be able to do that even with our two top playmakers at the height of their game -- if you have nine guys with their eyes on the backfield, that's more helmets than blockers can deal with.

But if the Orange are going to leave corners on islands and deal with the consequences, Siemian's the man to burn them. Spread the field and have Tony Jones and Christian Jones go to work. Just a slip-up or two could do the job against a team with an anemic offense, and it's not worth running an injured Mark and Colter ragged if Cuse is gearing up to tee off on them anyway.