Cal is why advanced statistics matter

Share All sharing options for: Cal is why advanced statistics matter

I've heard the term Bear Raid used in a serious context far too often this week. Mostly because it's entirely too cheesy to be used seriously, but also because reporters, players and analysts alike have used the Cal "Bear Raid" offense as a reason that Northwestern should be seriously concerned about the outcome of Saturday's game.

The Cal game has scared a lot of my friends and a lot of our readers, and it apparently has the Big Ten Network so worried that two of their analysts chose Cal to beat NU. Yes, 1-11 Cal to beat NU in Evanston.

Let's put aside the fact that NU's injury/transfer losses this year aren't really as bad as they seem. And let's put aside that this is the most talented defense the Wildcats have had in a long time, and the fact that Cal is horrendously terrible at defense. Let's focus on the one reason people keep picking Cal to beat (or at least frustrate) Northwestern — the offense.

On the surface, Cal's passing attack looked pretty great last year. The offense was 34th overall in yards per game and 10th overall in passing yards per game. These are the numbers that keep freaking everyone out. But to only look at these numbers would be a major mistake.

Anyone can have a ton of passing yards if they throw the ball a ton, and that's what Cal did, throwing the ball the fourth most in the country to give off the illusion that it had a great passing offense. But it doesn't matter how often you throw the ball if you don't do it efficiently, and Cal was absolutely terrible at being an efficient passing offense. Let Rodger Sherman explain:

They ranked 103rd in offensive efficiency. QB Jared Goff averaged just a smidge under six yards per passing attempt -- that's bad -- and the team didn't seek to establish -- nor did they establish -- a run game. Essentially, they very quickly ran a lot of bad plays, at which point your speed kinda becomes a detriment.

This is why it's important to looked at the advanced statistics — particularly the efficiency numbers — before judging how good an offense is. It's like a few years ago when Minnesota claimed to be a good running team just because it ran the ball a lot. Doing something a lot doesn't mean you do it well. However, passing a lot has helped Cal scare NU fans into thinking it's a great passing team.

For example, given how NU struggled on offense down the stretch and how often Cal threw the ball, I'd assume most NU fans would think the Bears had a far better passing offense. But in reality, the Wildcats were better, and as Jon Davis showed us, it wasn't even close. 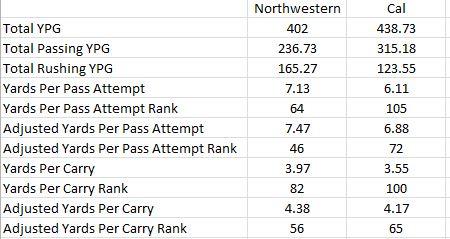 Northwestern's horrendously bad offense was still a full yard-per-play better at passing the ball than Cal's. And the NU run game was better than Cal's, as well. We could go on, but I think the picture is clear: Cal is very bad at offense, which is really the only reason anyone picked the Bears to be good in the first place.

So this Saturday, pick Cal at your own risk. Sure, the team could get better in year two under Sonny Dykes, but a vote of confidence for the Bears is a vote for a very bad offense, a very bad defense and a team opening on the road.