Cal buried Northwestern with an early avalanche of points, then held on for dear life against a comeback attempt

Cal won this game in the first quarter: 156 of their 414 yards and 14 of 31 points came in the opening period. They managed this despite being fairly inefficient on a per play basis (they ran 29 plays, for a bit over 5 yards per play), by being nearly perfect on third down (6 for 7) and converting their lone third-down failure into a touchdown on the opening drive. Unsurprisingly, that level of success on key downs didn't continue, as they converted only 2 of 10 third downs and 1 of 2 fourth downs the rest of the way. They managed another touchdown on a 76 yard bomb and one off a short field but couldn't sustain drives without that exceptional third down performance. If the defense can cut out the big plays (in addition to the TD, one of Cal's third down conversions in the opening quarter came when Goff scrambled and found a receiver for a 40 yard gain), they can be similar to the bend-but-don't-break unit that kept NU in games last year when the offense fell apart down the stretch.

The Northwestern offense, meanwhile, struggled; far from being able to run the ball, as I had predicted, NU managed only 108 yards on 36 carries, with Justin Jackson and Solomon Vault at least grinding out a respectable 40 yards on 8 carries and 25 on 5, respectively. The problems started up front, where the line didn't allow much penetration but also didn't generate movement; running backs generally had to avoid a tackle at or near the line of scrimmage to make something happen. This is not a recipe for success.

Aside from a 54 yard touchdown in the second quarter and Trevor Siemian's touchdown reception, there wasn't much to celebrate in the passing game, either, which wasn't consistent enough to sustain drives with short throws or explosive enough to pick up chunks with big gains. The receivers dropped a lot of balls, and Siemian was way off target on many more. At least the line looked fairly good in pass protection, with most pressure coming when Siemian held the ball too long or failed to recognize blitzes.

NU and Cal hit back-to-back long passes in the second quarter; both plays featured coverage busts resulting from the defense switching assignments during the play. First up, the Northwestern offense.

NU starts near midfield in a balanced formation; Cal puts a safety deep in the middle of the field, with the rest of the secondary aligned to play man coverage and the front 6 crowding the line, threatening to blitz 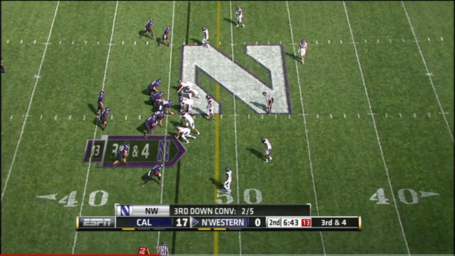 As Dan Vitale motions from right to left, the safeties switch assignments: the left safety backs off, while the right safety moves up and follows Vitale. At the snap, Northwestern has formed a three receiver bunch to the left. 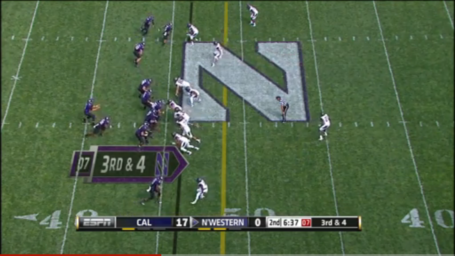 One of the advantages of bunching receivers is that it creates a traffic jam as they release; man defenders trying to track their man can easily rub each other off, commit a penalty, or fall victim to an "incidental" pick from of the other receivers. To combat this, teams that want to play man against a bunch will use rules that assign coverage responsibilities after the snap, based on the distribution of routes (links for illustration of the principle only; whatever the exact division of responsibilities, Cal is definitely not running either of those exact schemes). 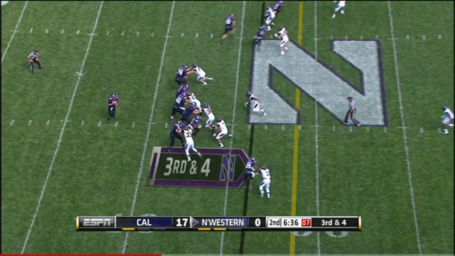 In this case, the inside receiver (Vitale) heads for the flat, the middle receiver takes an outside release, and the outside receiver (Cameron Dickerson) heads for the middle of the field. Two Cal defenders immediately pick up their assignments, blanketing the flat and deep route. The safety who followed Vitale, however, starts outside before realizing that he is responsible for Dickerson's crossing route and reversing field to follow.

On the other side of the field, the lone receiver (Kyle Prater) runs a shallow cross, coming underneath Dickerson's route. With Prater's man following underneath, and six defenders rushing, only one Cal player is in position to make a play: the deep safety. His approach leaves something to be desired, as he takes a bad angle and arrives late, allowing Dickerson to easily get outside and take the ball in for the score. 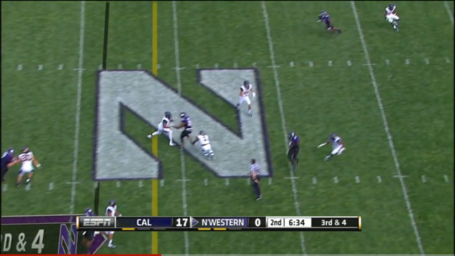 This is a classic example of the high risk side of man blitzes: one defender blows his assignment, another takes a bad angle, and suddenly Northwestern has their first score of the day. The motion to the bunch appeared to help, as the rotating safety appears not to be sure of how the coverage will be distributed, resulting in the easy win for Dickerson, but the deep safety's miss is only on him.

In contrast to Northwestern exploiting a blitz, Cal got their biggest play of the day against Northwestern's base defense, on first and 10. Cal lines up in a 2x2 spread formation, while Northwestern puts 7 in the box and leaves the secondary to handle the receivers. 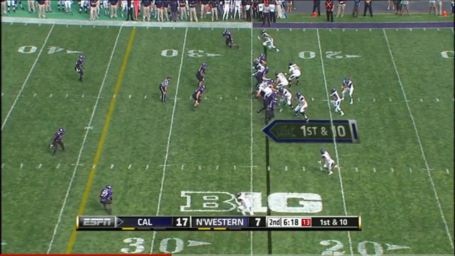 On the left, Cal runs a very simple combination, with the slot receiver heading to the flat and the outside receiver running deep. Northwestern is in Cover 4, with the secondary playing one-on-one against deep routes and rallying spare secondary players to shorter throws. On the offense's left, Drew Smith rushes from his linebacker spot, while Dean Lowry drops into coverage on the other side of the field; this means that the two defensive backs, Matthew Harris and Traveon Henry, will be all alone on vertical and out-breaking routes from the receivers on their side. There are two ways that cover 4 deals with this kind of two-on-two situation: either the corner stays with the outside receiver and the safety with the inside no matter what they do (basically playing man coverage), or they will switch assignments if the inside receiver breaks outside, with the corner moving up to take the shallow outside route and the safety picking up the outside receiver's route. 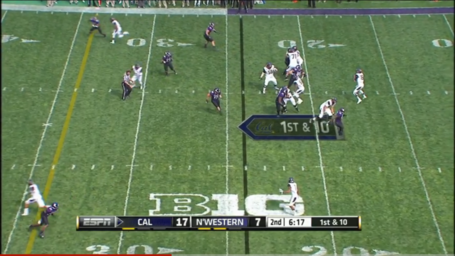 Except in this case both players keep dropping deep, leaving the receiver in the flat with plenty of room, until Goff pumps in his direction, and both defenders bite; Matthew Harris comes down hard, while Henry takes a step towards the line before realizing he is the only defender who can pick up the deep route and turning to cover.

Henry is unlikely to recover in the best case, being a safety against a receiver already at full steam, but he also makes an awkward turn that further slows him down. Any chance of Henry keeping with the receiver depends on taking advantage of his positioning at the start of the play; once that is wasted, Henry has no chance of recovering if the ball is delivered on target, which it is. 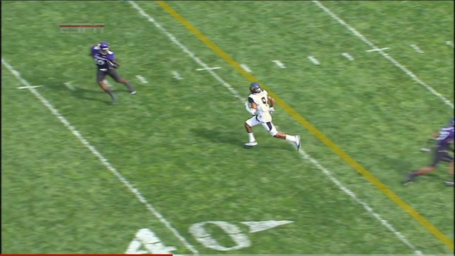 Assuming I'm right about Northwestern's coverage call on this play, there are two questions: first, why it took until the pump fake for one of the defensive backs to react to the receiver in the flat, and, second, why the other wasn't looking only to the deep route. The point of cover 4, to a large extent, is that it positions players to have an advantage against deep routes, without the natural downfield seams of cover 2 and cover 3. It is supposed to be weak to quick throws that force the secondary to tackle in space and combinations that stress the coverage rules deep (like running a curl in front of the safety to open room for an outside receiver running a post), not to a single receiver running deep. There is a basic problem of execution here, possibly exacerbated by poor communication.

Northern Illinois whipped Presbyterian 55-3 in their opener. My only knowledge of Presbyterian comes from watching Cal play them a few years ago, when they were single most hapless lower-division patsy I have ever seen, so I'm not sure that that score tells us much about the Huskies. Their major question involves replacing quarterback Jordan Lynch, who ran and passed for 4800 yards last year as they cut through the MAC on the way to a 12-2 record, but I am more concerned with whether Northwestern can get the offense rolling. Scoring a good number of points wouldn't prove that the struggles against Cal were just week 1 rust, but it would at least show that the offense isn't completely hopeless.

Panic will increase if: Northwestern loses

Panic will stay the same if: Northwestern wins ugly

Panic will decrease if: Northwestern scores more than 40 points and wins by multiple scores