Share All sharing options for: Film Breakdown: Northwestern has fun with bubbles!

The defense had a great day, starting with an aggressive gameplan that broke down Penn State's line with repeated blitzes. It wasn't a surprise to see the Nittany Lions struggle on the ground, but holding Christian Hackenberg under 50% completions and 5 yards per attempt was amazing. Anthony Walker was the name on everyone's lips, as he led the team in tackles and scored a touchdown on an interception return; I'm excited to see more of him as the season goes on. I'm not sure what this performance means going forward; Penn State's offense is as one dimensional as any Northwestern will face, and even that dimension isn't great. Still, it's encouraging to see a dominant performance.

As for the offense, I really don't know what to think. Penn State came in with one of the best defenses in the country, and the offense looked pretty good in the opening quarter before slowing down as the game went on. Then, in the fourth quarter, the run game got moving a bit to punch in the final touchdown. I'm cautiously optimistic about the performance; most of the unforced errors that plagued the early season seemed to be gone, and they produced a decent yardage and point total against a tough defense. Then again, three of the four touchdowns came from an interception return, a 28 yard drive, and a 31 yard drive; the defense and special teams did a great job of putting the offense in favorable positions, which will be needed going forward.

Warren Long deserves a special note, for turning this busted power into a 20 yard gain: 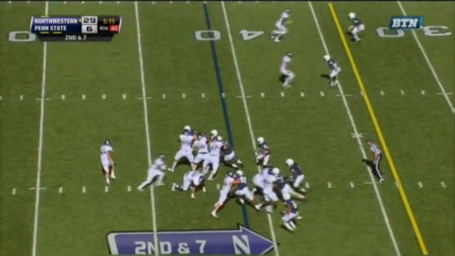 That's a zero-yard play redeemed by Long busting through two tacklers. I am impressed.

While the run game eventually produced some decent plays in the fourth quarter, for most of the day the offense rested firmly on Trevor Siemian and the receivers. Siemian looked more comfortable throwing seam and fade routes than he has so far this year, but I want to highlight a more pedestrian part of the passing game: the bubble screen.

As a play, the bubble screen is very simple: with two or more receivers to a side, the inside receiver runs to the sideline (the "bubble" route), while the outside receivers block. Because it doesn't involve any players other than the receivers on one side of the field, it can easily be packaged with another play; this makes it an easy addition to interior runs or runs away from the receivers, which is the niche early spread coaches found for it. The flip side is that the defense can easily take the play away: put two defensive backs tight on those two receivers and you'll never have to worry about the bubble.

Northwestern's first bubble screen came on the third play of the game. Northwestern lines up in a 2x2 formation, with Dan Vitale in the slot to the boundary; Penn State plays the field side honest, with a defender over each receiver, but tries to avoid doing the same on the boundary by putting a linebacker just outside the tackle (circled), where he can both provide run support and help with short routes from Vitale. 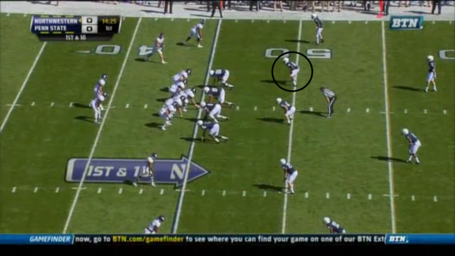 At the snap, the line blocks for a zone-blocked counter play, while Trevor Siemian meshes with Treyvon Green and locks on to the boundary linebacker. When he takes a step towards the run, Siemian pulls the ball to throw. 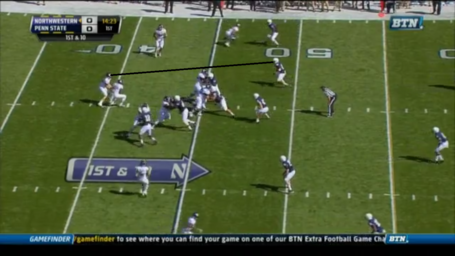 Tony Jones makes a lunging attempt to chop block the corner; it doesn't knock him down, but it does spin him around inside, opening a lane down the sideline for Vitale to pick up 28 yards. 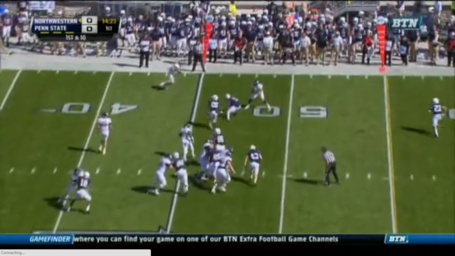 While defenses usually make a gesture at defending the slot receiver, sometimes the offense gets a perfect look to throw the bubble; Northwestern saw one of these in the third quarter.

With Northwestern again in a 2x2 formation, with Vitale in the slot to the boundary, Penn State now has the linebacker to that side lined up in between the end and tackle, while the safety to that side is lined up deep and inside. 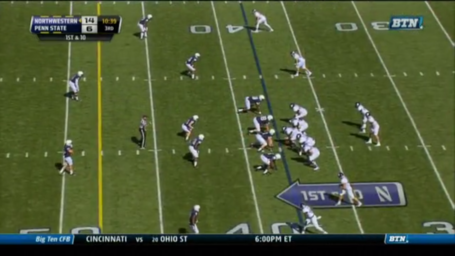 Justin Jackson and the line are running the same counter as the first play. Instead of the full mesh, however, Siemian makes a cursory gesture towards Jackson; with the linebacker inside and the safety deep and inside, this is going to Vitale all the way. 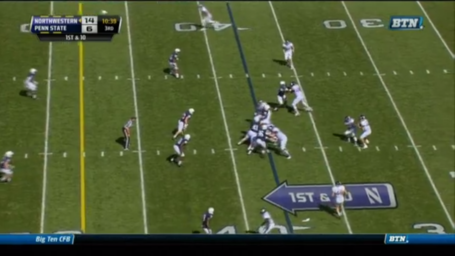 Cameron Dickerson makes a decent block, and Vitale has a free 11 yards down the outside before the safety gets over to make the tackle. 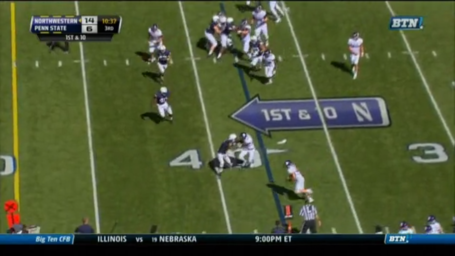 The bubble screen is an extreme case of taking what the defense offers; there is no way to force it. If the defense is positioned to take it away, it should never gain a yard no matter how well executed it is; on the other hand, if the defense leaves receivers uncovered, it should pick up decent chunks with ease.

While the Penn State game was encouraging, particularly for the defense, I'm not terribly optimistic about Wisconsin. Defensively, this will be both the best rushing offense Northwestern has faced and a new challenge stylistically, as Penn State (a terrible rushing team that still spends much of their time in the shotgun) has been the only opponent thus far willing to get under center and pound the ball inside. The good news is that Wisconsin has been having quarterback struggles and can't do much other than hand the ball off; the bad news is that they are very, very good at that, even against good defenses. Western Illinois and USF both had some early success crowding the box and forcing Tanner McEvoy to throw, so there is hope, but sustaining a strong performance all game will be a challenge.

Offensively, Wisconsin is another good defense, if a bit green up front. Against Penn State, the offense spent most of the day in favorable field position, which helped it turn a mediocre statistical day into three touchdowns and a few more scoring chances; unless they make another leap, they will need the help again.

I'll be at the game, so a win would be extra sweet, but I don't expect one. A respectable defensive showing and a not hopeless day on offense would hit my expectations, and a win would get me thinking about winning the division.

Panic level will stay the same if: Northwestern puts up a fight

Panic level will increase if: Northwestern gets rolled and injuries start piling up