The 'Cats got a first round bye and will face the 20th ranked Stanford Cardinal in the round of 16 at Lakeside Field.

(Lax is upon us, and our bro Brandon knows enough about it that TV networks pay him money to talk about it sometimes. He'll tell us about Northwestern vs. Stanford now, for no money.)

Stanford beat Notre Dame 8-7 for the right to play NU, and the game might have been even better than the final score. It was a brisk night on the lakefront, the two teams started slowly, with Stanford leading 4-2 at the half. The Cardinal took a 6-3 lead in the second half after Julia Burns scored an unassisted goal with 17:06 to play. The Fighting Irish had been listless all game, but finally woke up with just over 11 minutes left. Lindsay Powell scored the first of four consecutive Notre Dame goals (all by non-starters) to give Christine Halfpenny's squad a 7-6 advantage (also, Halfpenny is the probably the best name a Notre Dame coach can have). It was their first lead since the opening minutes of the match. 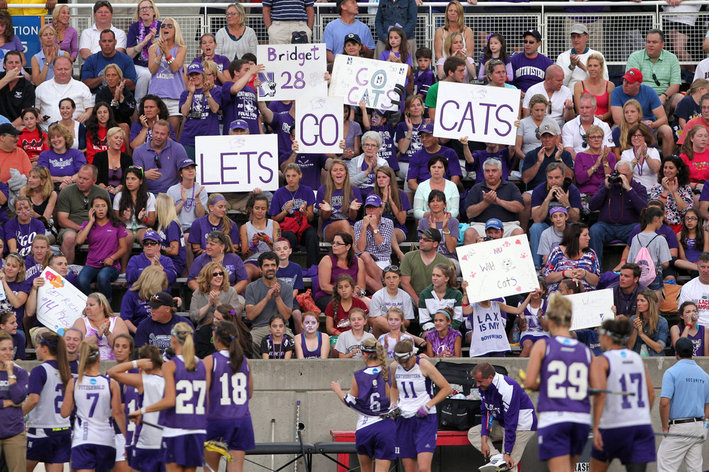 We write about it sometimes!

Notre Dame had all of the momentum. Stanford didn't look to have much going offensively, but after a timeout Lucy Dikeou created some space for herself and whipped a shot past Notre Dame goalie Ellie Hilling for her third goal of the game. Stanford won the ensuing draw and ran the clock down. In the waning moments of regulation, Hannah Farr charged in on the right side of the fan and a couple Notre Dame defenders took position between her and the goal. A controversial shooting space violation was called with just seven seconds remaining, giving the Cardinal a free position opportunity. It was a difficult angle for Farr, but she converted with four seconds left in regulation. Stanford's team rushed the field in celebration of the program's first ever NCAA tournament victory.

Their celebration couldn't have lasted too long, though. Less than 48 hours after the conclusion of that thrilling game, they will face have the Northwestern Wildcats in Evanston for the second time this year. Northwestern won the first game 12-8 on April 14 behind three points from Sports Illustrated College Athlete of the Year Nominee Taylor Thornton. But that doesn't mean this one will be easy. Stanford had an early lead in that game and only trailed by one at the half before NU shut down a potent Cardinal attack in the second half.

Stanford has made their mark as an elite offensive team this year. Coming into the tournament, they averaged 14.22 goals per game (9th in the NCAA). Their 356 points as a team were 10th in the country. They're lead by Teewaraton Award nominee Rachel Ozer. After missing almost all of last year due to injury, Ozer leads Stanford with 47 goals and 22 assists. Behind Ozer, Rachel Bokker's team has five players with at least 27 goals this season. They've scored 20 or more goals three times.

Over the past three games, though, Stanford has shown they can win defensive battles as well. They've given up a combined 19 goals in those contests. After a 16-6 win over rival Cal in the Mountain Sports Pacific Federation (Yes, that is a thing) tournament semifinals, they beat top seeded Denver 7-6. Their past two games have been against teams ranked in the top 11, so it's not like they're shutting down easy competition.

Northwestern is the better team in this one and will have a good chance to advance to the quarterfinals next weekend.

The good news for Northwestern is that they they match up pretty well with Stanford. Stanford has only failed to reach double figures in four games this season, and one of those games was against NU. The aforementioned Ozer has scored in 17 of Stanford's 19 contests this year, but both of the games that she's been held of the scoresheet have been at Lakeside Field (including Friday's game against Notre Dame). Kerri Harrington is generally regarded as NU's best one-on-one defender, but expect the 'Cats to throw different looks at Ozer with Christy Turner and Taylor Thornton spending time on the Cardinal's best attacker.

Draw controls will be a huge factor in this one. Stanford thrives off of possession and the ability to control the tempo. Coming into the weekend, they led the country in draw controls with 15.22 per game. They're led by Megan Lerner's 61 in that department, but Anna Kim isn't far behind with 55. Northwestern counters with Alyssa Leonard. The junior broke the single season draw control record last weekend against Florida and has a ridiculous 112 on the year (She is also NU's career draw control leader with 293).

Northwestern is the better team in this one and will have a good chance to advance to the quarterfinals next weekend. Northwestern won the last meeting between these two largely because they controlled possession and outshot Stanford 19-8 in the second half. They also got nine saves from goalie Bridget Bianco and were able to keep Rachel Ozer from scoring. Kelly Amonte Hiller will want to use a similar blueprint on Sunday.

If you're in the Chicago area, come down to Lakeside Field. You have to pay for tickets because it's an NCAA game, but students get in free thanks to Coach Hiller. But if you're not in town, be sure to check out the game and my play-by-play on the Big Ten Digital Network for free (Link here). Game is at 1:00 pm central.