The key to making an NFL roster at wide receiver is puppy ownership.

Kain Colter and Jeremy Ebert are each going through one of the most stressful months of their respective lives as fledgling NFL wideouts. Colter, a QB at Northwestern, is trying to hang on at a new position with the Vikings. Ebert, a sometimes-on-the-roster, sometimes-off-the-roster WR with the Jaguars last year, is hoping to make cuts with the Falcons -- except he isn't eligible for the practice squad this year.

However, both have figured out a really solid way of relieving that stress: PUPPIES.

Those are old pics -- both pups have since grown a bit

No word on whether or not Ebert and Colter coordinated on their Lion King puppies, or whether they thought about the implications of naming a dog after a cat or a warthog, but we approve all around. We imagine neither guy was allowed to bring their pup to training camp, but, well, my point is, we have Instagram pictures.

Also no word as to whether these puppies — along with the commitment of Simba Short — will help get NU to finally replace the N-Cat with a better logo. 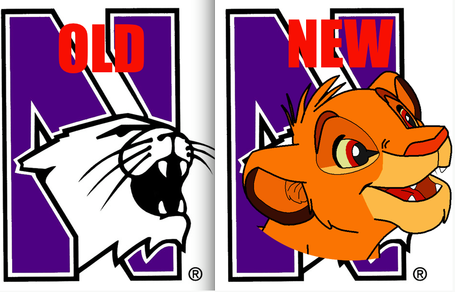